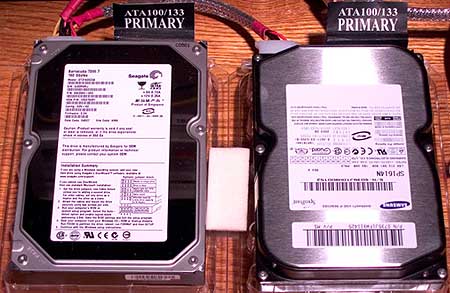 Seagate Barracuda and Samsung SP Series hard drives are topics of endless discussion in the SPCR forums. We have also featured reviews of these drives, some in direct comparison. However, this is the first time that we’re considering the current ATA performance leaders of each series, head to head. The review is Edward Ng‘s debut as a writer for SPCR.

Seagate Barracuda 7200.7 and Samsung SP Series hard drives are topics of endless discussion in the SPCR forums. We have also featured reviews of these drives, some in direct comparison. However, this is the first time that we’re considering the current ATA performance leaders of each series, head to head. This article is Edward Ng‘s debut as a writer in the main site of SPCR. Forum regulars will surely be familiar with Ed, who has been very active in the forums. — Mike Chin, Editor.

Both drives are 160GB in capacity. Both drives have 8MB of cache. Both drives use dual double-sided 80GB platters, totaling four heads each. Finally, they both have UltraATA/100 interfaces.

The test took place across two separate platforms. I performed the performance tests on my system, Alpha Three, by disconnecting the optical drive and then installing each drive on its own channel on the southbridge PATA controller. Each drive rested on top of a Seagate SeaShell container on a wooden floor, as pictured above (that piece of foam was just to make sure the camera autofocused properly), and here: 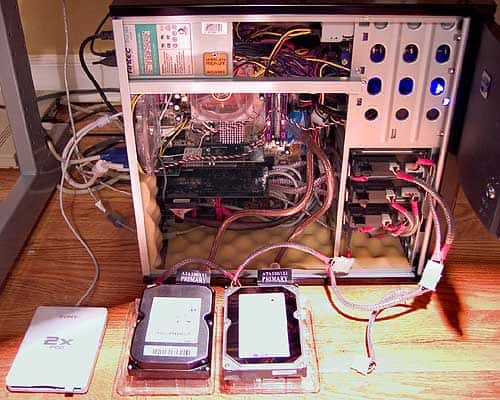 The USB floppy drive was used to boot into Hitachi Disk Feature Utility to check Automatic Acoustic Management options on both drives. Many modern hard drives have AAM, which trades a bit of the drive’s performance for much quieter seek operation by reducing head movement noise.

The reason why I chose to use Alpha Three as the performance test platform is because I wanted to eliminate the possibility of a system bottleneck affecting results. Alpha Three’s performance is fast enough that there is no way it would hold the drives back. 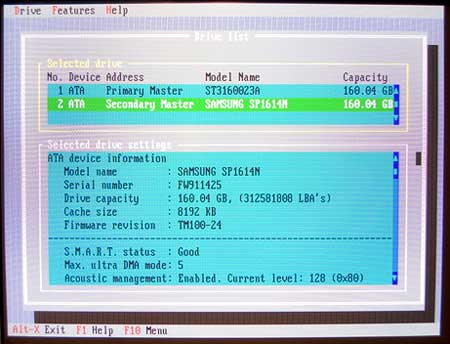 Whereas the Seagate’s listing shows this: 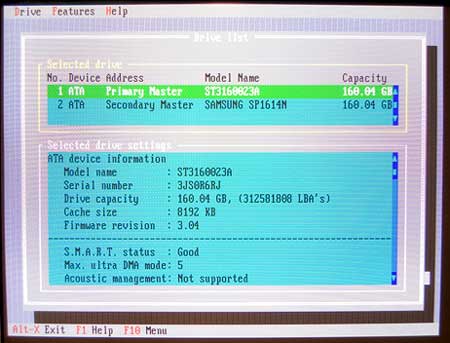 Notice that the SpinPoint offers AAM control, while the Barracuda’s AAM function has been disabled. According to this forum thread over at StorageReview, Seagate has the PATA version of the 160GB Barracuda permanently set for low-noise, while the SATA version is locked to high performance mode. I’m not entirely sure whether or not to believe it, but we can let the benchmark results speak for themselves.

(EDITOR’S NOTE: Several commercial system integrators that I contacted were of the opinion that AAM is NOT enabled in any 7200.7 drive. Seagate’s AAM is the subject of a lawsuit; their disuse of this feature is pending the outcome of the case. However, it appears that, at least until fairly recently, OEM buyers could order large batches of the Seagate drive custom configured to their requirements. This means, for example, that HP or Dell might purchase 20,000 80G Barracuda 7200.7 with AAM permanently enabled. If excess inventory is produced, and that inventory makes it to the grey market, then you’d find AAM enabled 7200.7 drives from a few retailers for a brief period.)

Here is a shot of the control screen for the Samsung’s AAM function: 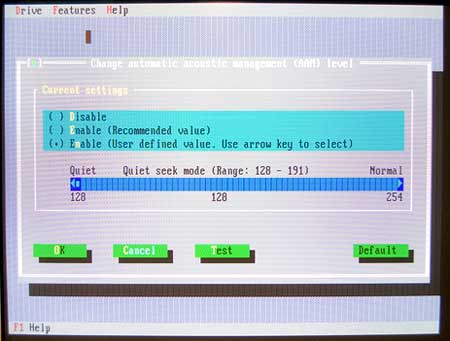 And this is what happens if you try to adjust the AAM on the Seagate: 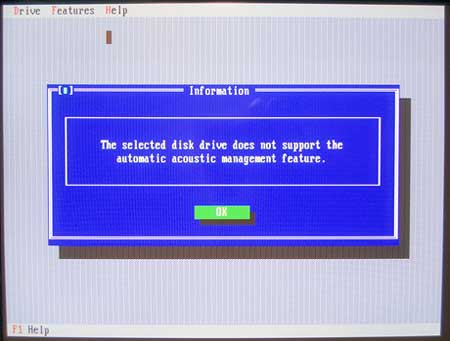 SPCR’s focus is silence; in the spirit of silence, I performed all tests on the Samsung for this comparison with AAM set for minimum noise.

With all the basics established, let’s take a look at the benchmark results.

I used WinBench99 as a test utility. I tried SiSoft Sandra but it proved inconsistent, and thus worthless; I didn’t entirely trust my results from HDTach, either, so I nixed those as well: 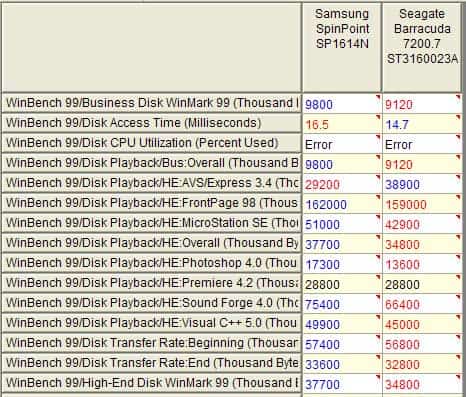 The Samsung took virtually every test, short of access time. It’s one thing if the Samsung won the transfer tests and then some of the application tests, but it basically won everything except access time, so whatever (AAM) setting the Seagate is locked onto, even if it’s in performance and not quiet mode, it didn’t help it win any speed contests. We know the Samsung is set to quiet mode, which costs a bit of performance, so no matter how you look at it, the Seagate is the clear loser in WinBench99.

This is the Samsung’s transfer rate graph: 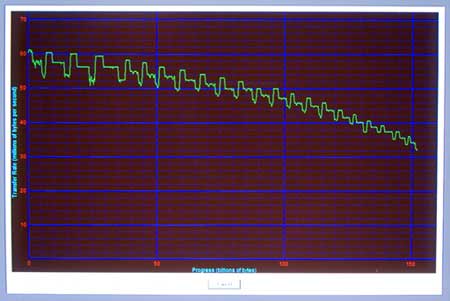 And this one is for the Seagate: 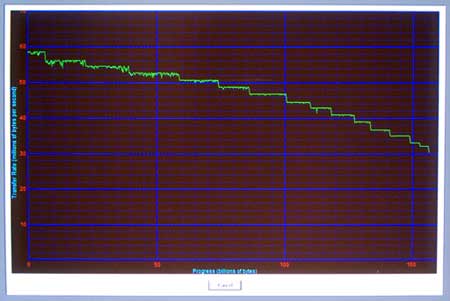 The bizarre shape of the SpinPoint’s graph is consistent with the results other reviewers have gotten with SpinPoint drives. I am unsure as to why it looks like that, however.

Now that performance is out of the way, let’s get moving on the part that really matters — acoustics!

I utilized my other system, Sigma One, as a platform for acoustics testing. The reason for this is that the noise floor of the two drives is much lower than that of Alpha Three, whose three Diamond MAX Plus 9 drives and Cheetah 15K.3 easily drown out the two quiet contenders. Sigma One’s virtually silent operation proved perfect for testing acoustics.

Just to confirm that both drives are operating as defined in Part 1 of this test, I took screenshots of the info panel from Intel’s Application Accelerator drivers on both drives: 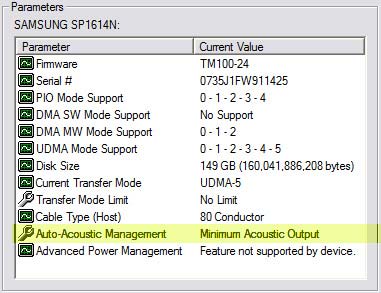 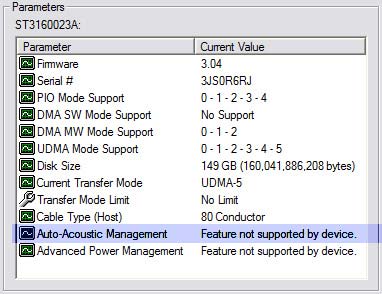 Both drives were tested in the wide open, and again, as in the performance portion of the test, they were placed on top of a pair of Seagate SeaShells and then rested on a bare wooden floor…

The idle acoustics portion of the test was done by turning on Sigma One without either drive plugged in, and then simply taking a free Molex connector and powering each drive up individually and carefully listening to acoustic performance. I wrote down detail, subjective notes on what I heard, both directly facing the drive, and also with my head turned so that my ear faced the drive directly…

Samsung SpinPoint P-Series SP1614N
The Samsung’s idle sound is best described as a wind-like sound, not unlike that produced by an EXTREMELY smooth, medium-speed 92mm fan. There is only the absolute slightest whine, which is of an EXTREMELY high, high frequency, as if Samsung tuned it right out of the human hearing range. That whine isn’t even audible when you face the drive directly; only if you turn your head so your ear faces right at it.

Seagate Barracuda 7200.7 ST3160023A
The Seagate exhibited less windy hiss, but more metallic whine. The sound was less smooth and consistent than the Samsung’s, and also more resonant. It appears as though the chassis of the Barracuda is not as critically dampened as that of the SpinPoint. Facing the drive directly also reveals a mid-high frequency internalized hum that’s harder to pick up when you turn away from it.

A Note on Vibration
This is not exactly scientific, but…
while I was performing the idle acoustics tests, I had to hold the drives as I plugged and unplugged the power to the drives. Naturally, I could not help but feel the vibrations of the drives with my hands. My impression is that the heavier Samsung drive emitted much softer, weaker vibrations than the Seagate did.

Samsung SpinPoint SP1614N
To be fully honest, with the drive suspended on top of that Seashell, it was extremely difficult for my ears to pick up the seek noises of this drive. I was shocked, since when I first got the drive and set AAM to low noise, it wasn’t this quiet. It appears that a, “break-in,” effect has taken place and the seek noise has been further reduced. However, if I moved my ear within several inches of the drive, I am able to pick up the seeks as an extremely faint, mid-frequency chatter.

Seagate Barracuda 7200.7 ST3160023A
The Seagate’s seeks came through clear and obvious in the open air. The noise is best described as a mid-high frequency, highly rapid combination of clicks and clattering. I liken the sound of it to that of rapidly moving water in a tube with a whole lot of air bubbles in the line, if anyone here knows what I mean (fish tank owners, unite!).

Overall
The Samsung is the hands-down winner, here. It’s a no-contest, as the seeks of the Seagate were clearly audible anywhere in the room during the test, whereas the Samsung required diving under the table right up to the drive just to get a hint of the noise. It really makes you wonder whether the people over at StorageReview are in anyway correct about Seagate locking the ST3160023A in to low-noise. If it was true, then I’d expect much lower noise than this!

Please keep in mind that variations in manufacturing will and do occur.

Samsung hard drives available at Silicon Acoustics and EndPCNoise in the US, and at FrontierPC in Canada.