Consumer electricity monitors work fine to measure power consumption, but they cost upwards of US$100. It’s also more than we need. Our electronics advisor Tommy Yee suggested building one really cheaply. With our shoestring budget, that sounded much better. My super simple power meter took half an hour and $5 of parts. A very useful tool.

Measuring
PC power consumption is not a task that interests the average computer user.
However, if you are interested in minimizing noise in your PC, then you should
be concerned about how much heat is dissipated inside the PC. If power dissipation
inside a PC can be reduced, the heat generated is reduced proportionately, making
it easier to cool with fewer, slower and quieter fans. By measuring the overall
AC power consumption, it is possible to obtain a pretty good idea of just how
much heat is being dissipated, and how much power your system really requires.

PC hardware engineers have specialized tools by which individual components
power consumption and dissipation can be accurately measured. Not here at Silent
PC Review. No, we make do with whatever tools can be obtained cheaply, borrowed
or in some cases, made. This is one of those cases.

For general purpose consumer use, electricity
monitors such as the one pictured above work fine to measure power consumption,
but they cost upwards of US$100. It’s also more than I need. Our electronics
advisor Tommy Yee suggested I could build one really cheaply. With our shoestring
budget, that sounded much better. After chatting with Tom for 10 minutes, I
decided to get to work. My super simple power meter took half an hour to make.

Basicially it is an ordinary AC cable that has been modified with a 1-Ohm resister
in series with the hot lead. A pair of screw terminals permanently connected to the resistor leads allows multimeter proble ends to be attached easily to
measure the voltage drop across the resistor. 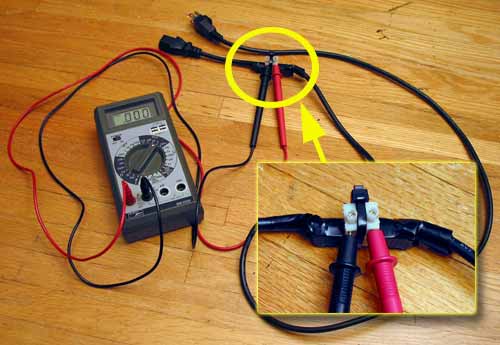 I had all the parts kicking around except the resistor, which cost under $1.
A multimeter is also needed, but I’ve had one for years, so that was the total
cost. The meter does not read power in Watts nor current in Amps directly, but
it’s pretty close.

The ouside insulator of a standard computer AC power cord was spliced open
about 2 inches and cut away. Then about 1.5 inches of the “hot” lead
was cut away. The resistor was soldered in place of the missing bit of wire,
and the 2-contact screw terminal also soldered in parallel with the resistor.
The terminal was strapped to the resistor with the plastic tie strap to keep
it secure. The terminals allow measuring probes from a multimeter to be easily
attached. Lots of electrical tape was then wrapped around the solder joints. 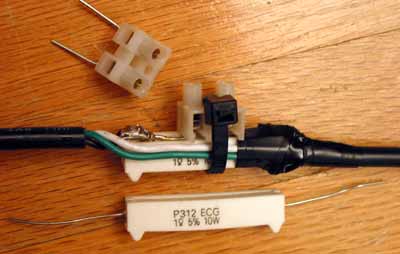 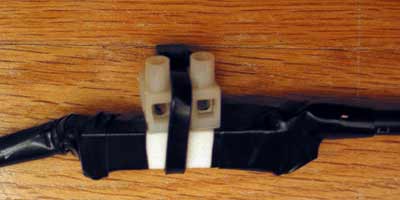 In a simple closed electrical circuit, the same amount of current runs through
every component. If you know the resistance of any single component and the
voltage drop across that resistance, then using equation 1 above, you can calculate
the current in the circuit. Once you know the current, then you can calculate
the power dissipated in the circuit using equation 2.

My first measurements were on a system composed of the following:

At idle, the multimeter read 0.49V. This translates directly to 0.49 Amps.
I had already measured the voltage across the AC outlets in the house; it reads
within 0.5V of 120V. I assumed 119V, taking into account the effect of the 1-Ohm
resistor. This is the voltage drop across the PSU. Multiply 0.49A by 119V =
58.31W. This is the power consumed by the system at idle.

At maximum load (achieved by running SiSoft Sandra CPU burn-in while opening
and closing both CD drive drawers), the mutimeter read 0.87V steady, and 0.92V
momentarily a few times. It is possible that there were peaks which couldn’t
be registered by the multimeter, but I would think these peaks are short enough
not to pose any problem for most PSU. Calculated the numbers: the steady maximum
came to 103.5W while peaks reached 109.5W.

The numbers seem amazingly low, don’t they? I checked the multimeter’s accuracy
against a more expensive multimeter and a calibrated test power supply. At this
voltage range (0-2V), they correlated within 1%, so there appears to be no instrument
error.

Manufacturers rate power supplies by adding up all the power that can be delivered
on each voltage rail. However, few ordinary PSUs can deliver full power to all
the voltage rails simultaneously. The Enermax EG365P-VE FCA used in this system,
for example, is rated for 350W. The fine print shows that the maximum power
deliverable on its 3.3V and 5V lines is limited to 185W. The 12V line is rated
for 17A, for a maximum of 204W. The total is actually 389W, so the unit is conservatively
rated.

The ability to delivery stable current on each voltage line up to its maximum
without being affected by activity on other voltage lines is probably the biggest
benefit obtained with a higher rated PSU. Instability and unwanted ineractions
between different voltage rails is the likely cause of most PSU-related PC misbehavior.
This Builder’s
Guide for Desktop/Tower Systems by AMD provides interesting details about
system configuration and power requirements.

WHAT HAPPENS TO THE WATTS?

The Enermax PSU is rated for ~70% efficiency. This means that 70% of the electrical
energy it draws from the AC supply is converted into DC power. What happens
to the remaining 30%? It is lost as heat inside the PSU, caused by losses in
components, contacts, wiring, etc. So at idle, the PSU in this system generates
17.5W of heat; at maximum, the heat goes up to 32.4W.

The remaining power is delivered to the actual system components: 41W at idle;
77W at maximum. The lion’s share of this power is dissipated as heat by the
P4, which can hit ~55W maximum. The Barracuda IV hard drive, when working hard,
generates up to 12.8W, most of which translates to heat as well. The work that
is done consists of spinning motors in drives, motors and other electromechanical
devices, and pushing electrons around in circuits. Most of it converts to
heat.

This simple power meter will be used as an analysis tool for reviews of power
supply units, CPUs, systems and other hardware.

If you decide to build one for yourself, please note the following CAUTION:
While modifying an unplugged AC cable is not dangerous, the fact that it is used to carry
live AC current makes this device dangerous. Make and/or use this device at
your own risk. Your health at risk from electrical shock, and warranties for any equipment with which the modified AC cable is used may be voided.

June 1, 2002 — Reader Peter Nudin wrote me a thoughtful email about the limitations of this DIY Power Meter:

“The calculations you made are perfectly fine for DC circuits. This will also
work for an AC circuit if your load is a simple resistor (e.g. a lightbulb).As
soon as you have a capacitor or a coil in your circuit (and in your PC there’s
many) things start to go off the rails.

“Think of the AC voltage as a changing DC voltage (which it is). In a DC circuit
nothing changes, so at a given voltage you will have a specific current flowing.
When conditions change (e.g. the voltage rises) the current change will depend
on the type of components in its way. Resistors just follow, so if the voltage
reaches its maximum the current will do the same. Simple.Coils or capacitors
however respond with a timeshift, so at any time the current can be higher
or lower than you would expect from a resistor.

“The next factor is your multimeter. Most DMMs are made to measure AC voltages
only if they have a perfect sine shape. The number displayed in the end is
the result of some calculations. Again these calculations go wrong if you
have anything else than a sine. (Which is the case here) If you want real
numbers you need a DMM that is prepared for the job. It needs to be equipped with a feature called “True RMS”. Unfortunately many multimeters
on the market today labeled with “True RMS” do not actually have
it, but make funny calculations again, so look closely. True RMS DMMs have a tendency to be expensive.”

I responded: The question is how much of an error is introduced. Any idea?
Also, isn’t the effect of the coils and caps buffered somewhat?

“Typically the real power consumption will be somewhere around 70-80% of
the readings that you get. Normally I wouldn’t expect the factual power consumption
to be higher than your results. The exact effect is hard to tell because of
the unknown characteristics of your DMM and also because the behaviour of
the power supply will usually change depending on the load. (BTW: The efficiency
of your power supply will usually also change depending on the load)

“Your method is OK to get a rough idea of how much energy you’re blowing through
the chimney – for comparisons I would suggest getting a real powermeter. Maybe
you can borrow one somewhere, I would suggest contacting your electricity
company or a local environmental agency or initiative.”

The good thing, if Peter is right, is that my device probably reads high. To
check, I have decided to take his advice: I found an AC power meter called Kill-A-Watt (groan…) for just US$40 and decided that was within my budget. There are some nice reports about this device. Will report how well it works and compare results to my cheap and dirty power
meter.

For the electronically savvy, here is a DIY
article for a really nice AC power meter at Circuit Cellar: A PIC-Based AC Power Meter by Rick May. The article is also downloadble as
a PDF.