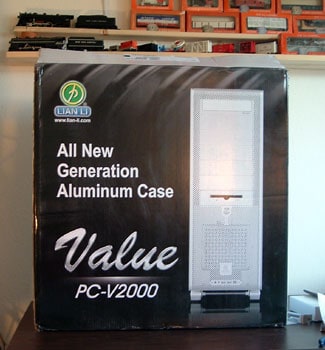 Reader Charles Gilliatt’s write-up on the big version of Lian-Li’s new PC-V series of cases that turns the AXT tower configuration upside down with the PSU on the bottom. It’s visually stunning, and Charles gives us lots of photos to ogle along with a detailed description of his impressions on his first step towards PC silence.

Although a relative newcomer to the silent computing phenomenon, my friend Charles Gilliatt is about as computer savvy as they come. He’s been tinkering inside PCs as far back as I can recall, and has spent many years as a system builder and computer tech. Charles provides an interesting perspective on the start of a quest for silence with one of most intriguing new cases to come along in a long while: The Lian-Li PC-V. Being a newbie in the silent PC world, his write-up does not have the intense, comprehensive focus on noise / thermal performance as case reviews by SPCR Staff, but it still provides insights — and many detailed photos — of this interesting case.

If you were to poll computing enthusiasts on who manufactures the best cases, chances are Lian-Li
is a names you’d hear most often. They’ve raised the design
and fabrication of aluminum cases to a near art. I recently came into posession
of one of the newest additions to their case lineup: The PC-V2000.
The PC-V line is significant for more than just its newness, it also represents
a fairly radical rethinking of the case’s internal configuration.

It arrived on the doorstep in a flashy full-color box. It seems more and
more case manufacturers are seeing the value in pretty retail packaging.

The styling of the PC-V2000 makes use of Lian-Li’s trademark aluminum body
with one obvious difference, the perforated front and back of the case. The
whole thing has a look of sophistication. It exudes class; nothing flashy,
nothing gaudy, just a “quality” look to it. The case, constructed totally from aluminum is extremely ridged, strong and
well built.

The case sits on what
can best be described as a set of 4 miniature aluminum skateboard wheels,
with a locking mechanism. This performs 2 very useful functions, making it
easy to move the case around on the floor, as well as lifting the case off
of the ground to allow for airflow in through the case’s perforated bottom.

The various external connection ports are located at the bottom of the front
bezel. The ports blend nicely beneath the preapplied Lian-Li badge and fade
in with the overall look of the case. Left to right the ports are mic-in,
audio-out, 2x USB 2.0 ports, and one firewire port. All the amenities you’d
expect from something in this price range, right up front where you can get
at them. 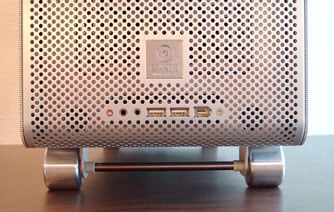 Moving up the front are the indicator lights, the power button, and the preinstalled
3.5″ floppy drive face. The lights are mere pinholes below the power
button, but proved to be surprisingly bright, with a blue LED for power and
red for the hard drive indicator. 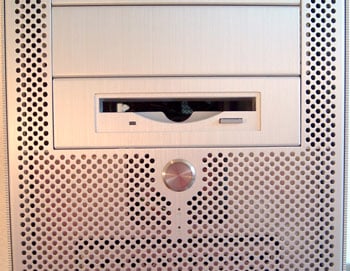 At the top bay of the case is another preinstalled goodie, a stealth CD-ROM
cover. 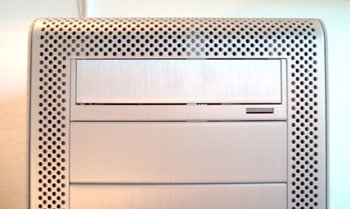 Moving around to the rear we get the first hint that something is beyond
the norm with this case:

No the picture isn’t mirrored funny. The power supply is mounted at the bottom
of the case and the motherboard is mounted on the opposite side of the case.
Essentially it flip-flops the usual arrangement.

Moving in closer for the photo below, the lower panel of the case is removable and houses two 80MM
fan mounts and the cutout for the powersupply. 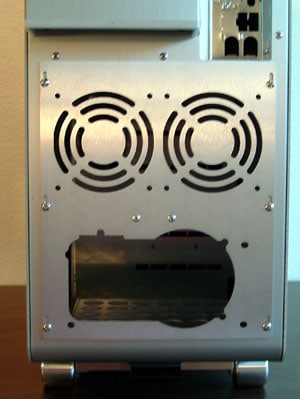 Higher up the rear of the case is the standard removable I/O panel, albeit
flipped, and a 120MM fan mount. The case includes a detachable aluminum duct
that deflects the fan’s exhaust downward. 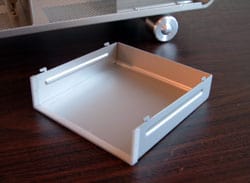 Close examination reveals that the 120mm fan is mounted on rubber
washers. The fan grill uses the same hole pattern as the rest of the perforations
on the case. While nice from a design aesthetic point of view, the resulting
grill isn’t as unrestricted as it could be. It probably blocks half the airflow. If you’re brave enough to take
the tin-snips to it, you could open up the airflow pretty easily. 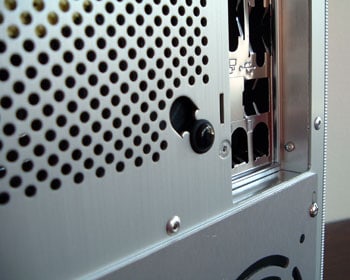 The top rear of the case reveals a rather unique case screw
design. There is only a single thumbscrew securing the case side. The thumb
screw is mounted on a spring mounted clip so once unscrewed it remains in
place. Pulling back on the thumbscrew releases the side panel. Very well thought
out, no more looking for thumbscrews that have bounced across the floor. 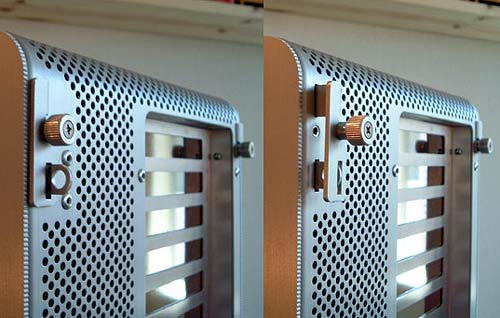 The side panes are constructed of solid 1/8″ thick aluminum
and are reinforced with U channels down the length of all 4 sides making them
quite sturdy. Resonance seems like an unlikely concern with these panels,
given their heft and stiffness. An extra touch of finger-friendly styling
is added to the edges of the sides with a subtle scallop pattern. 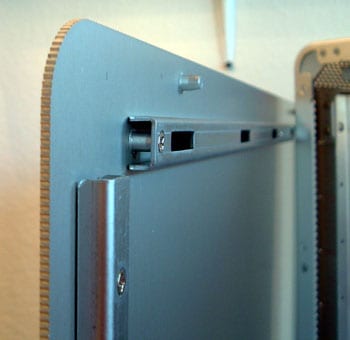 Inside the case we can really see the radical design
changes that Lian-Li incorporated. 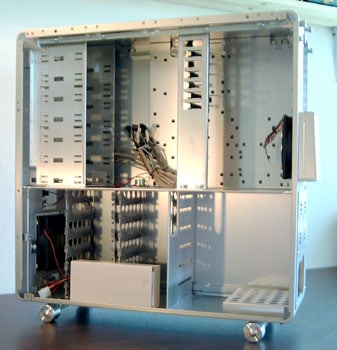 The spacious interior leaves room for hard drives galore, water
pumps and reservoirs, beer cooler, or a number of other uses. A quick finger
test throughout the interior of the case reveals no burrs or sharp edges. 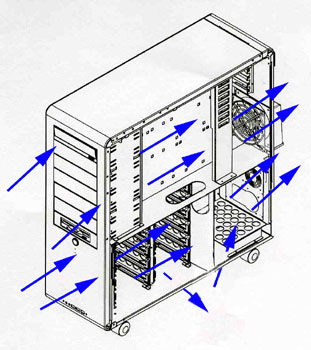 The case has 3 compartments: Hard drives, PSU, and Motherboard.

As mentioned previously, the PC-V2000 has space for 12 HDDs.
If you’re running 12 hard drives, chances are that silence is not one of your
major concerns, but needless to say, there is plenty of room down there to
work with. 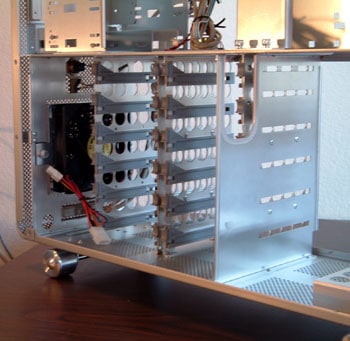 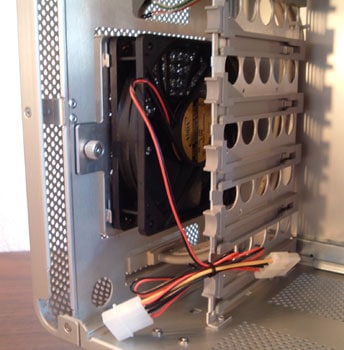 The compartment is fed air by a 120mm intake fan. The fan is
an Adda AD1212LB-A71GL,
rated at 72CFM and 34dBa. This fan is mounted to a frame with 4 plastic pushpins,
each isolated from the frame by rubber washers. The frame is then mounted
to the chassis by 2 captive thumbscrews, similar to that used to secure the
side panel. Two rubber washers are employed here as well. When removed it
reveals a built-in filter panel: 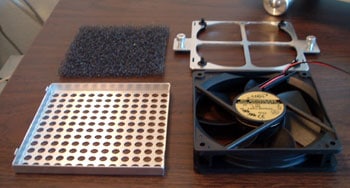 The hard drives are mounted on a series of plastic guard rails
with special screws to slip them into place and lock. The system is quite
secure, and the plastic rails soften the drive noise, at least somewhat. Much
less than I think you would get with a full decoupling, but better than a
stock hard mount. The amount of space available would make rigging a suspension
system a very simple mod. 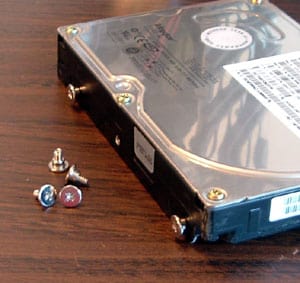 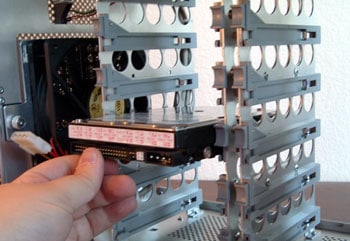 The Power Supply area has a raised platform that the PSU rests
on. The holes in it are useful, since a 120mm fanned PSU will have the fan
aimed downwards. The perforated bottom seen in the HDD compartment continues
in here, provided air supply for the power supply. 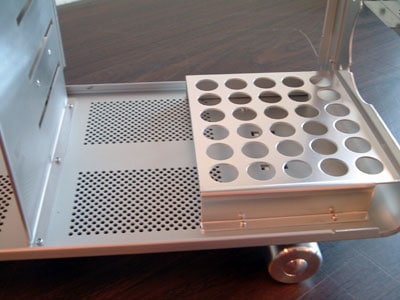 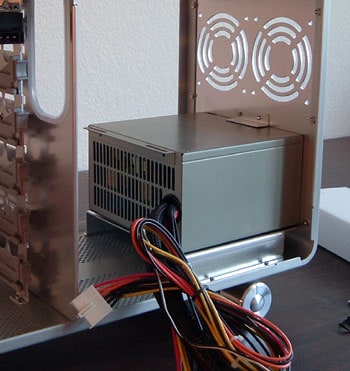 Moving on to the motherboard area… 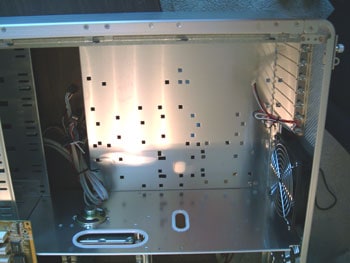 I developed a love-hate relationship with the motherboard mounting.
Unlike most other Lian-Li cases, the motherboard tray here is not removable. Complicating
installation further is that the holes for the aluminum motherboard standoffs
are not labeled according to their form-factor. With support for everything
from M-ATX to E-ATX, that’s a lot of holes, and a lot of holding the motherboard
inside the case to see which holes need standoffs. The 120mm exhaust fan
is identical to the intake fan described in the HDD compartment, with the
exception of having a 3-pin, instead of a 4-pin connector. 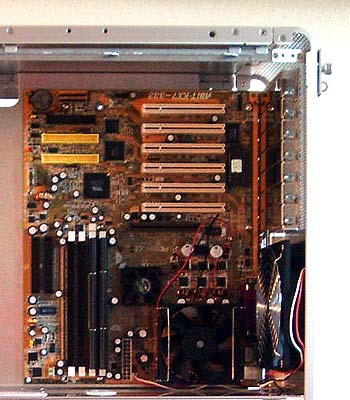 But once in, the standoffs proved to be very secure. 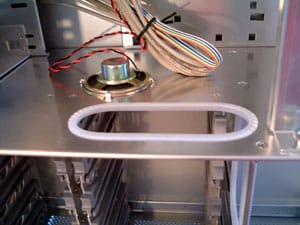 Between each of the three compartments there is an oval pass-through
for the wiring and cables. Each is trimmed with a plastic protective guard.
The holes are plenty large, and wiring even a large number of drives shouldn’t
be a worry. It does make “cable-gami” more of a challenge, however: 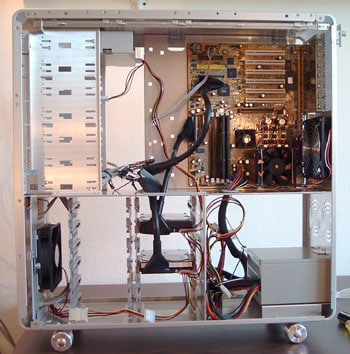 The PC-V2000 is the first step in my process of quieting my
machine, so the hardware used for the testing is probably not among the SPCR
ideals. But a head-to-head comparison with my original should be useful for
comparison: 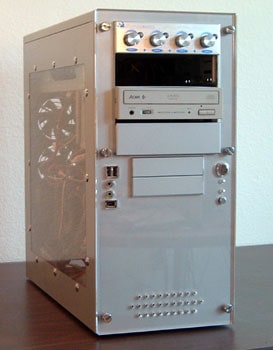 The comparison case is an AMS Gmono CF-2029 case. It has been
a fine case but is a touch on the small side.

CPU and Board test temps were arrived by letting the idle at
the desktop, and running CPUBurn for the load temps. HDD load temps were read
after extended defragging sessions. The ambient temp was a toasty 27°C
for the testing. (Hey, it is Phoenix after all)

All temps in °C

The temp results speak for themselves. The 120mm fan exhausting from right
behind the CPU is probably largely responsible the reduction in CPU temps.
The case temperature is a bit deceiving, I think. The interior definitely
feels cooler than before, yet the Board temp is the same. The readings may
be more the result of where the sensor is on the motherboard
than anything else. I was concerned that hot air would be trapped at the top
of case, but the perforations along the top of the back panel seem to be doing
their job: I can feel the warm air drifting up out of them.

The overall the noise level by ear has been cut in half, which is a significant
drop,considering the noise levels of my components. The thickness of the case
sides, combined with their reinforcement bars and latching mechanism, seems
prevent the dreaded “aluminum hum” that other, thinner aluminum
cases have.

As I said, this case is Step 1 in the process. Immediate future upgrades
include replacing the HDD’s with a new Samsung, and a new PSU. The CPU and
heatsink will wait until a 64 bit motherboard shows up on my doorstep.

Much thanks to Charles Gilliatt for this thorough review of the Lian-Li PC-V2000
Tower Case.