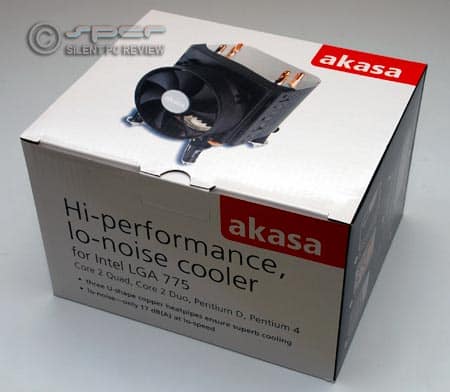 Akasa’s 92mm fan tower heatpipe cooler for Intel 775 CPUs has all the key features at a very budget price. Can it run with the big boys?

Since the "tower" heatpipe heatsink design first appeared in the PC world a few years ago, it has become dominant. The tower heatpipe heatsink has cooling fins arrayed in a tall stack with heatpipes running up/down through them, and the fan blows through the fins in a path parallel to the surface of the motherboard. Previous designs had the fins perpendicular to the motherboard surface, and the fan blowing down towards the board. There’s not a single brand which doesn’t offer some variant of this basic design. Some models vary less than others.

The Akasa AK-965 can best be described as an execution of the tower heatpipe heatsink which stays very close to the median for such designs. (This is not a slight on Akasa, which makes dozens of CPU cooling devices, including some that are considerably more innovative, nor is it a slight on the heatsink itself.)

Akasa began in 1997 with the design, manufacture and distribution of heatsinks to the PC OEM sector and the retail distribution channel. A Taiwanese/British venture with international distribution, Akasa’s products are easiest to find in the EU. The product range has expanded considerably, with cases, power supplies, control panels and accessories all in the mix.

Akasa’s marketing department felt that SPCR’s international audience, with some 40% of readers in the EU, would appreciate a review of one of their products. The AK-965 is the first Akasa sample that landed in our lab. It is very modestly priced among DIY aftermarket coolers: It can be found for around £10~11 including VAT in the U.K. Another variant of the product, the AK-965BL, appears to differ only in that it features a blue LED fan. 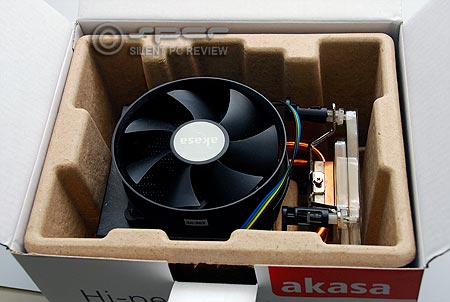 …opens up to reveal the heatsink nestled in recycled carboard.

NOTE: Weight is not given, but it doesn’t feel much greater than about 500 grams.

The AK-965 is about medium size for a retail DIY tower heatsink these days. It stands fairly tall, just over 5", slightly taller than Arctic Cooling’s Freezer 7, which it resembles. The spacing of the fins, at just under 2mm, is neither very wide nor very tight, in comparison with other heatsinks. As the spec sheet mentions, the 4-pin fan has 92mm diameter blades in an 80mm frame. There is nothing included in the package other than the heatsink/fan. This model is intended for use only on a socket 775 board, and the push-pin assembly is pre-mounted. 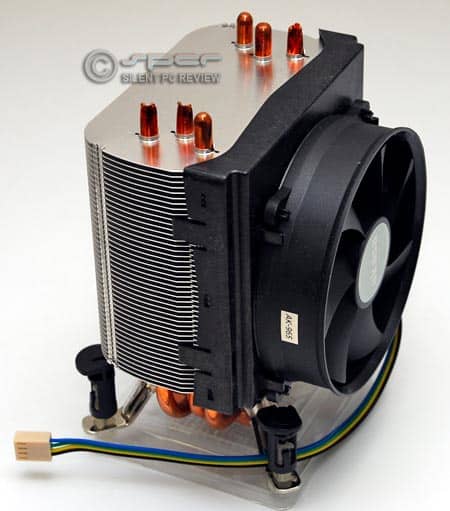 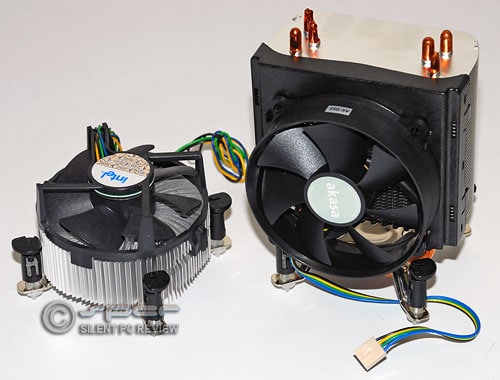 It’s easily double the size of the stock Intel HSF. 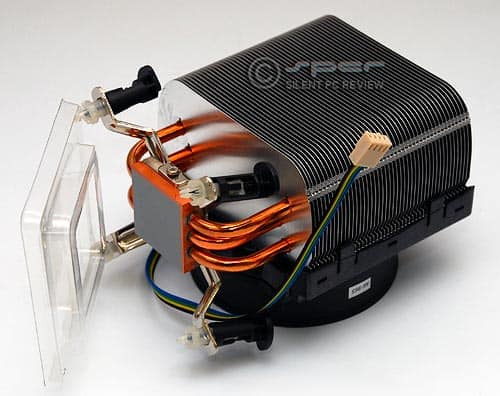 The frame on which the push-pins are mounted is allowed to pivot a bit.
The fins are press-fitted onto the fins as is the norm for this type of design.

Stock Intel push-pins are not our favorite mounting mechanism. But on the Akasa AK-965, they aren’t inappropriate; at least the heatsink isn’t much heavier than the stock Intel heatsinks. The push-pins on the AK-965 are not hard to use, as there is enough clearance for your thumb to get squarely atop each pin for maximum pressure if the fan is removed before you try to install the heatsink — either just the fan or the whole fan assembly. The installation probably can be done with the motherboard already installed in a case, but it’s not wise. As with most large heatsink, it’ll be easier to install the AK-965 with the board outside the case, and you’ll have the chance to examine the underside of the board to make sure the pins are really secure.

The amount of tension applied with push-pins depends mostly on the distance between the base and the ends of the mounting frame where the pins are, and the stiffness of the mounting frame. In the Akasa AK-965, the distance seems slightly greater than normal, and the stiffness of the frame is very high. The last pin was quite an effort to insert. There is supposed to be a small degree of bowing of the motherboard when the heatsink is installed, but the amount of bowing with the AK-965 seems a bit excessive.

Testing of heatsinks is normally done in accordance with our
unique heatsink testing methodology, and one of our reference fans, but because the Akasa-965 comes with its own integrated fan, an unusual one in that it’s a 92mm fan in an 80mm frame, we chose to test it with it own fan.

Noise measurements were made with the fan powered from the lab
variable DC power supply while the rest of the system was off to ensure
that system noise did not skew the measurements.

Load testing was accomplished using CPUBurn to stress the
processor, and the graph function in SpeedFan was used to make sure
that the load temperature was stable for at least ten minutes. The
stock fan was tested at four voltages: 5V, 7V, 9V, and 12V,
representing a full cross-section of the its airflow and noise
performance.

The ambient conditions during testing were 17 dBA and
21°C.

The stock fan was tested for acoustics. We didn’t do a full range of airflow / noise tests, but SPL and RPM measurements were taken at various voltages. At 12V, it’s far too noisy our standards. The turbulence noise completely dominates. At 9V, it’s better, but still too noisy. At 7V, it’s not bad; the overall level is low enough that many users would find it quiet enough. The acoustic character is a combination of buzzing and hissing, which combine to impart an impression of people whispering some distance away. It is audible from a meter away, but inside a case, with other noise sources, it may simply blend into the overall noise. Interestingly, the fan refused to either start or run at 5V. The minimum voltage needed for consistent start was 5.5V.

The performance achieved with the stock fan is excellent, the numbers posted at 12V and 9V being comparable to many of the top reviewed coolers. The caveat here, is the noise level, of course: The cooling performance is achieved at the cost of much higher noise than the best heatsink/fans. The performance of both acoustics and cooling are decent at 7V, which is probably the sweet spot (on this HSF) for silent PC users. The 37°C seen with the fan at 5.5V would end up with the CPU in >60°C range inside a real system, which is too high.

What about changing the fan for a quieter one? It’s feasible, but you have to go to an 80mm fan, which is a bit of a step down in that the volume of air moved for a given rotation speed is bound to go down. Remember, the stock fan has 92mm diameter blades in an 80mm frame. We gave it a go with our Nexust 80mm reference fan, which spins quite slowly and doesn’t move much air, but is very quiet.

At all voltages, the Nexus fan is smoother and more pleasant to the ear. Naturally, cooling suffered, but at both 12V and 9V, it wasn’t bad at all. The noise with the Nexus at 9V was somewhat preferable to the stock fan at 7V, and identical cooling was achieved. Testing was not done at 5V, as cooling would have been inadequate. The motherboard’s voltage regulators probably run hotter than with the stock 92mm fan, as the 80mm fan provides hardly any airflow in that area.

The alternative is to use a manual controller (either in the BIOS or externally) to reduce the fan speed down to an acceptable level, monitor the CPU temperature over time to be safe, and adjust the fan speed if necessary. Chances are, this approach will work fine, and you won’t risk the fan speeding up and down annoyingly due to a poorly designed BIOS thermal fan control system.

In most SPCR heatsink comparisons, because one of the reference fans has been used, we can simply lay out a table showing the temperature rise for each voltage/speed of the reference fan for a number of different heatsinks. Here, this is not possible. Virtually no other heatsinks were tested in the last couple of years with our reference 80mm fan, which was used in the test. Trying to lay out a simple comparison for data for several different SPL points for each of several fans is almost impossible.

So which noise level would most readers be interested in? Probably the 22 dBA@1m reached in the AK-965 with the stock fan at 7V. Various heatsinks tested in the past were sought out for performance data closest to 22 dBA@1m SPL, never mind the fan used. This will include comparisons with HS that have the advantage of better/bigger fans that blow more air at the same SPL. This is not a "fine" comparison, but a rough guide. (The prices are the best I found in a quick online search, March 14, 2008.)

Arctic Cooling Alpine 7 Pro – The only one priced lower in our database of heatsinks reviewed on the same platform, it also comes with an integral fan and cools much worse at the same SPL.

Gigabyte Volar – Much higher price and aspirations, the Volar comes with an integral 120mm fan. It may cool slightly worse at the same SPL.

Zalman CNPS8700 LED – More than double the money, with integral fan, and probably performs about the same at 22 dBA@1m if you can get the fan to spin slower.

Scythe Ninja Mini – Its performance is clearly better at the same SPL (with the Scythe 80mm fan it was supplied with), but it also costs $10 more.

These recordings were made with a high resolution, studio quality, digital recording system, then converted to LAME 128kbps encoded MP3s. We’ve listened long and hard to ensure there is no audible degradation from the original WAV files. It represents a quick snapshot of what we heard during the review. The recording contains ~10 seconds of the heatsink fan sound at each speed tested.

The recording is intended to give you an idea of how the product sounds in actual use — one meter is a reasonable typical distance between a computer or computer component and your ear. The recording contains stretches of ambient noise that you can use to judge the relative loudness. For best results, set your volume control so that the ambient noise is just barely audible. Be aware that very quiet noises may not be audible — if we couldn’t hear it from one meter, chances are we couldn’t record it either!

More details about how we make audio recordings can be found in our article: Audio Recording Methods Revised.

The Akasa AK-965 offers very good value for money, and it can be run quietly in many Intel-based systems. The combination of large fin area, multiple heatpipes, good mechanical integrity at the joints, and very high pressure clips makes for excellent cooling performance. The fan is noisy when allowed to run at full speed, but when slowed down to under half speed, it’s probably quiet enough except for the most demanding users, while still providing decent cooling.

The pressure of the mounting system seems excessive, and users should exercise care to ensure no damage is done to the motherboard during installation. Even though it uses push-pins, it’s safer to mount the heatsink with the motherboard ouside the case.

There’s little in the way of posturing, fancy packaging, or excessive verbiage in this product. The absence of large amounts of plastic is nice to see. There wasn’t even a plastic bag!

It’s not the cat’s meow among performance coolers, nor is it a product that silent enthusiasts will whisper loudly about, but the Asaka AK-965 is a worthy low cost replacement heatsink for socket 775 processors. In the hands of a modder, with a top-notch 120mm fan, and perhaps through-the-board bolt mounting, it could easily be the equivalent of a poor man’s hot rod.

Much thanks to the Akasa Group for the AK-965 sample.