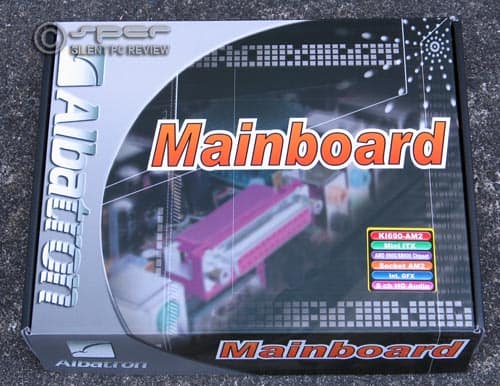 Albatron has released the KI690-AM2 for AMD AM2 processors to bring high performance computing and Mini-ITX together. We run the wee 690 chipset board through a bank of tests to show what you can expect in a HTPC setup.

 Albatron KI690-AM2: A Mini-ITX Motherboard For The Masses

VIA developed the Mini-ITX platform in 2001 to take advantage of low power
C3 processors they had acquired from Cyrix. With boards measuring only 17cm
by 17cm and processors that could be cooled passively, VIA created a niche market
for compact, power efficient, and low noise systems. However, VIA’s C3 (and
more recently the Eden and C7) processors were never powerful enough to entice
mainstream users, so Mini-ITX remained beloved by a small dedicated group of
users, and for the most part, it was ignored by the rest.

Albatron, a relatively small player as manufacturers go, previously attempted
to capitalize on and expand the Mini-ITX market with an AMD Socket 754 motherboard
powered by the Geforce 6150 chipset, the KI51PV-754.
While it piqued the interest of many, it came a little too late. With Socket
754 all but obsolete, the choice of CPUs was severely limited and underpowered.
Now Albatron has released the KI690-AM2, to bring high performance and Mini-ITX
together.

This is not the first attempt at such a marriage. There have been a number
of mini-ITX boards for Intel processors, including the AOpen
i945GTt-VFA m-ITX C2D motherboard that we reviewed some time ago. It
is the first AM2 platform for mini-ITX, however, and the first to take advantage
of the superior features of the AMD 690G/SB600 chipset, which include about the best
integrated graphics performance yet to be offered on any platform.

The KI690-AM2 combines the speed of AM2 Athlon 64 and X2 processors with formidable
high definition audio and video playback provided by AMD’s Radeon X1250 integrated
graphics, all in one petite package. Interestingly, the board makes use of notebook
SODIMM memory, presumably to save space. Albatron includes almost every feature
one would need: gigabit ethernet, high definition audio, Firewire, even RAID
functionality. However with its size, comes limitations. There is only one PCI
expansion slot and two slots for memory, which is about the norm for mini-ITX.

Normally in this section we would provide some pictures of the BIOS, but in
this case we felt it was unnecessary. The only selectable options of note were
memory clock (400/533/667/800), command rate (1T/2T), and UMA frame buffer size
(AUTO/32MB/64MB/128MB/256MB/512MB/1024MB), i.e. the amount of memory allocated
to the integrated graphics. There was also a Frequency/Voltage Control section
with only two options: NPT Fid and NPT Vid control – both of which were grayed
out and thus out of reach. Fan control is provided by the Smart Fan Control
option (Enabled/Disabled) available in the Hardware Monitor section.

The KI690 has two fan headers, one 4-pin PWM connector intended for the CPU
fan and one 3-pin connector. Unfortunately the stock heatsink that came with
our test processor, the X2 3800+, was of the 3-pin variety and could not be
controlled with 4-pin header. We plugged in a 4-pin fan from an Intel LGA775
stock heatsink to see how well (or if at all) Smart Fan worked. The fan ran
at approximately 2140RPM before we began stress testing. After a few minutes
we did not notice the fan speed changing and assumed the fan control feature
was broken or faulty. It dawned on us that perhaps the CPU was not heating up
enough for the fan control to kick in, so we turned off the AMD stock fan. Once
the core temperature exceeded 50C and Smart Fan increased the fan speed to about
2550RPM sporadically, that is the speed would ramp up with little rhyme or reason
beyond this point. Not content, we installed the latest version of SpeedFan.

RPM reporting in the BIOS was accurate however SpeedFan seemed to have some
difficulties. No reading was displayed for the 3-pin header and an erroneous
reading was attributed to the 4-pin fan. While the LGA775 stock fan is loud,
1,350,000RPM is somewhat of an exaggeration.

We located the PWM settings in the Advanced menu. "PWM 1 mode" corresponds
to the 4-pin PWM fan connector. Changing this option to "Software controlled"
allowed us to customize the fan’s speed, however we found the minimum and maximum
speeds to be exactly the same as Smart Fan (minimum being approximately 70%).
The other PWM settings did not do anything as far as we could tell. The 3-pin
header was not controllable with SpeedFan or Smart Fan. 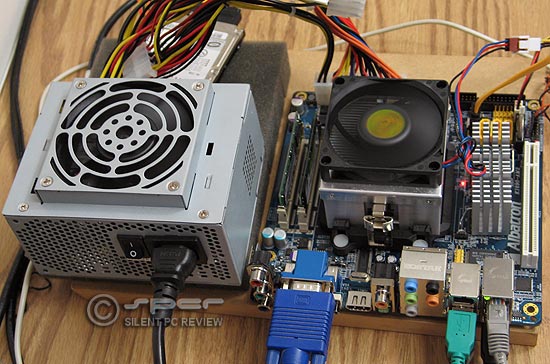 *The Aero Glass feature in Vista was disabled during testing. To enabled
Aero, more than 128MB needed to be assigned to video memory. This was not a
huge issue for us, but we feel it is worth mentioning.

The KI690-AM2 was tested in various states: Off, sleep, idle (with Cool N’
Quiet enabled), video playback, and full load using two instances of
CPUBurn K7. System power
consumption was measured at the wall using a Seasonic
Power Angel. We also examined CPU usage during video playback to see
how well the integrated graphics handled different clips encoded with the popular
H.264 codec, and the up and coming VC-1 codec. Clips were played with Windows
Media Player 11 and CPU usage was measured using the Windows Task Manager for
the duration.

The open testbed measured 25 dBA from a distance of one meter. The primary
cause of noise was obviously the AMD stock fan (unmistakable, even at 8V), with
the power supply fan coming in second. If used as a HTPC, it should be easily
drowned out by a movie even playing at low volume. For a compact desktop replacement,
this noise level may not be acceptable. SpeedFan reported Core temperatures
of 33°C idle and 53°C load (20°C ambient). These are not great numbers,
but not bad either; a third party heatsink would be ideal, but choices could
be limited due to the somewhat restrictive area, especially in a low height
horizontal HTPC case. The chipset heatsink on the other hand was lukewarm to
the touch, even during load.

The CPU was called on heavily during VC-1 playback, while H.264 was less demanding.
All the test clips played smoothly – even the WVC1 clip when CPU usage approached
90% on both cores. The Flight Simulator X trailer was encoded with a mind-boggling
60 frames per second, so this was not all that surprising nor disappointing.
Paired with a decent dual core processor, high definition playback does not
appear to be an issue for the KI690 except for the most demanding and heavily
compressed VC-1 formats. We used Windows Vista on our testbed and experienced
no difficulties, but using Windows XP may be problematic for VC-1 playback.
We received an e-mail from Albatron which in short, stated that due to a driver
issue, VC-1 audio playback is broken when using XP, with no fix in the works.

Power consumption with our run-of-the-mill 3800+ X2 CPU was fairly low: 32W
idle (with Cool ‘N Quiet enabled), 85W during CPUBurn, and under 70W during
video playback. These numbers were about what we expected. When turned off or
in Sleep mode (there was no Standby or Hibernate option in Vista when using
S3 suspend) used minimal power, probably due to the high efficiency of our power
supply at lower wattages. We would have liked the opportunity to see if the
system could do better than 32W but underclocking and undervolting options are
absent in the BIOS and there is no way to do it manually in Vista (that we know
of). One of the lower 45W TDP processors from AMD (the 1.9GHz BE-2300 and the
2.1GHz BE-2350) would naturally have helped drop the power consumption; alas,
our single BE-2350 sample was engaged in another project that could not be interrupted
at the time of testing.

We wanted to utilize the board’s HDMI connector to see how well it displayed
on a HDTV. Unfortunately we did not have a proper HDMI cable for testing (strangely
enough we had a HDMI to DVI and a DVI to HDMI adapter) so we cannot confirm
whether audio through HDMI functions properly. The video portion however worked
flawlessly and looked stunning on a Sony Bravia 40" 720p LCD. The native
resolution of 1366×768 was not supported by the driver, but 1280×720 was more
than acceptable.

Despite being part of a niche market, the KI690 can be adopted for many functions.
If you simply want a small, efficient box for general use, it fits the bill.
Install a fast processor, plenty of RAM and a RAID array and you’ve got a lean,
mean, video or audio editing machine. However, it’s best suited as a HTPC and
it is clear that is Albatron’s intention. The KI690-AM2 is positioned as a compact,
yet powerful multimedia solution and it succeeds where it should: Low power
consumption, versatile connectivity options and good high definition playback
in a tiny package. That all this is accomplished without resorting to any additional
components (such as a PCIe video card) makes it all the more impressive.

Of course it also has its share of faults, especially from a silent PC perspective.
Those of us who chase the lowest power consumption possible will be disappointed
as the incredibly draconian BIOS lacks underclocking and undervolting options.
Those seeking lower noise will need to resort to physical modification/replacement
of the CPU fan or an external fan controller due to the ineffective fan control.

Still, the Albatron KI690-AM2 performs exactly as designed and expected, and
it’s difficult to find fault with that, especially since it’s the only product
of its kind. There’s much to like and little to complain about. With the right
pricing and distribution, the Albatron KI690-AM2 has the potential to become
a mini-ITX board for the masses.

NOTE: Pricing and availability remain unclear. The original MSRP
was supposedly US$350, which is too high for a board without a CPU. However,
there have been reports of the KI690-AM2 advertised in Japan for around 30,000
yen, currently equivalent to US$260.

Much thanks to Albatron
for this motherboard sample.