AMD does it again with the APU 3600, a perfect blend of performance and value from Team Red.

AMD’s well-known for its great value, multi-threaded performance and bundled coolers, and this chip delivers all those basics for less, whilst punching well above its weight in gaming. 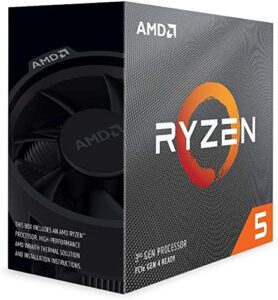 AMD APU 3600 is the ultimate in value when it comes to gaming. It’s low to mid-range in price and delivers shocking gaming performance.

Against its Team Blue competitors, the i5 Coffee Lake Refresh line, this chip definitely comes out top.

It’s cheaper than most of these Intel models, as well as having simultaneous multithreading, higher base clock speeds (except for the i5-9600K), and comes bundled with a free Wraith Stealth cooler. What a deal.

It’s a huge upgrade from its predecessor, the Ryzen 5 2600, thanks to the famous Zen 2 architecture.

This means a 7nm chip (improved from 12nm), higher clock speeds, and 15% more instructions-per-clock (IPC). All with the same 65W TDP, which is great if you’re using a small form-factor.

The chipset has changed to X570, but still supports the AM4 chipset, making upgrading easy.

Which motherboard to pair this with? Well, luckily there’s a lot of flexibility here. The good old B450 motherboards make a great pairing in terms of pricing, but there’s also the newer X570 with PCIe 4.0 support, if you’re able to take advantage of that within the scope of your budget. If you’re not, a B450 should do just fine.

As far as the upgraded Ryzen 3600X goes, there’s not much in it. The 3600X also has the same number of cores/threads, 32MB of L3 cache, and PCle 4.0 support. The only major difference is the more powerful cooler.

The Intel Core i5-9600K is probably it’s most direct competitor from Team Blue, but this has a much smaller cache (just 9MB of L3), no PCIe 4.0 and no multithreading (what Intel calls Hyperthreading).

Benchmark-wise, the gaming differences may be marginal, but if you’re doing anything aside from gaming (like game streaming) that uses multithreading, this is definitely the better choice.

Precision Boost means it automatically calculates how much it can overclock based on a ton of factors like your power consumption, type of workload, number of active cores, and cooling.

Where there’s headroom, PBO 2 will overclock until one of the limits is reached, and then automatically levels off, so your system is never over-taxed. It claims to monitor conditions and adjust frequencies up to 1000 times per second.

The included Wraith Stealth cooler is a huge bonus, since the Intels come with way more inferior stock coolers.

The 3600’s cache is another huge advantage over competitors; there’s a whopping 32MB of L3 cache, three times that of the Intel i5-9500. Just looking at cache size isn’t the whole story, though; it depends how efficient it actually is, and identical cache sizes can perform differently in benchmarks.

But, let’s talk in more detail about how overclocking affects this.

First up, you can overclock manually, by using one-click profiles, or let PBO 2 do its thing.

However, overclocking often seems to actually negatively impact single-threaded performance, rather than having the usual positive effect, because all cores can’t seem to overclock much together.

So what happens if you overlock automatically using AMD’s impressive-sounding Precision Boost Overdrive? Testing finds that all the cores together can only get within 200 to 300 MHz lower than the expected boot clock. In other words, it’s not worth it because your single-threaded workload actually suffers.

Even though there’s small gains on multithreaded workloads, your overall performance (unless you’re doing something which is mostly only multithreading, which is rare) will actually get worse. This is extremely disappointing, as rated boost clock speeds should be guaranteed. Unfortunately, it’s become a known Ryzen 3000 issue amongst enthusiasts.

However, there is an option with PBO to keep the single-core performance the same and boost threaded performance slightly. It works well with the included stock cooler, too. This won’t be much consolation when you’re cashing out for high-end chips and expecting more extreme overclocking capacity, but it’s not too bad to settle for this model.

There’s two PBO settings: Auto, which is the default, or Enabled, which pushes things to the max of your motherboard’s power whilst keeping the single-core clock speed stable.

There’s also an Auto OC option, but this sacrifices single-threaded performance under testing.

What about cooling? Well, whilst the included Wraith Prism cooler works well, you can get better overclocking results by spending a little more on a slightly better cooler, and can even get similar results to the 3600X with a high-end cooler.

This shows that it’s really the better cooler that comes bundled with the 3600X that’s making the difference.

The 3600 reaches 19,161 and 6,964 in 3DMark’s DX11 and DX12 CPU tests, beating many similarly-priced chips. It even matches the i5-9600K when the i5 is overclocked, which is surprising since the Intel’s are usually better at overclocking.

But then again, the i5 only has six cores and threads. 3DMark typically shows off multithreaded capacity. The 3600X marginally beats it.

This beats the i5-9400F and is comparable to the i5-9600F. Again, the 3600X beats it, unless you use a hefty cooler and overclock it, in which case it’s almost identical.

When it comes to gaming, the 3600 is agile, matching or beating the much more expensive Intel i9-9900K, and pretty much identical to the slightly more expensive 3600X.

Ashes of the Singularity: Escalation is a great game to use as a benchmark since it benefits from both single and multi-core capacity. The 3600 reaches 43.3fps on average at 1080p on Crazy when overclocked, again almost identical to the i5-9600K and beats the i5-9400K.

Of course, the Intel’s fall way behind when it comes to multi-threaded tasks like rendering. The Ryzen 3600 gets 3,501cb in the Cinebench R20 benchmark, similar to the i7-9700k at 3,712cb, a much more expensive chip.

Encoding is similar, with a Handbrake benchmark scoring 307 even at stock speeds, beating an overclocked i5-9600K with 337. Interestingly, the 3600’s score didn’t lower all when overclocked.

Likewise with tasks like photo- and video-editing. A Photo Editing benchmark gives a 12,961 score, which beats the i5 Intels, although the overclocked i7 does surpass it. Overclocking the 3600 doesn’t have much of an effect, even with a premium cooler.

A video-editing benchmark gives a score of 6,106 when overclocked, surprisingly similar to the superior Ryzen 7 3700X which only gets 6,102. Only the i7-9700K beats it. Oddly, a higher-end cooler doesn’t have a positive effect here.

Under non-AVX stress tests in AIDA64, it draws just 67W, beating a ton of competitors, all except the Core i5-9400F, which managed just 53W. This was also much more efficient than the 3600X.

With a Corsair H115i cooler and PBO on, this increased by just 3W to 70W, making it similar to the 3600X when overclocking.

So overall it’s very efficient, which is great for both your bill and for cooling.

This chip is a no-brainer for gamers (and most others) on a budget. The overall performance punches well above its weight, particularly in gaming, where in some cases it beats even the Intel Core i9-9900K.

You get Zen2 architecture, 12 threads, 32MB of L3 cache, and PCle 4.0 support, all for less than an Intel equivalent.

It’s a huge improvement on the previous 2600. As far as the more expensive and much-lauded 3600X, it’s close to it in performance, and even matches it with a better cooler.

So it’s hardly worth spending the extra cash, especially if you’ve already got a premium cooler in tow.

The overclocking issues with single-core performance are a real shame, but this is a problem with all Ryzen 3000 chips.

On the one hand you get simple one-click overclocking, but on the other there’s not much headroom overall. This will be a disappointment to overclockers, the other Ryzen benefits outweigh the negatives.