AMD’s DTX small form factor specification has progressed since its announcement in January 2007. Here’s an interim overview of DTX and its objectives, and a preview of a reference DTX system from AMD.

The setting of standards and form factors in the PC industry has largely been the domain of Intel for so long that it’s hard to remember when things were different. When things were different, all the way back in the early 90s and before, portions of the PC industry were in chaos as various standards for all kinds of components — graphics card slots, for example — competed for dominance. Compatibility is the glue that allows companies in the PC industry to work and thrive together; the role of widely-accepted standards is critical in achieving compatibility. Although broad consensus is required for successful establishment of industry standards, Intel has been the major driving force in this area for some time.

The development of the DTX spec was announced by AMD last January.
The photo above shows a reference design.

So last January’s announcement of the development of DTX, an open standard specification designed by AMD to enable the broad adoption of small form factor PCs, came as a bit of a surprise to many. The gist of DTX is contained in the following extract from AMD’s presentation.

More information is available at DTX Form Factors, including a Reference Design Overview Slideshow, an FAQ, and a DTX Mechanical Interface Specification. As we go to press, some 70 vendors have registered to implement DTX, and the list includes most of the biggest names in the PC component business.

The short 10-page DTX Mechanical Interface Specification is focused almost entirely on motherboard form factors; there’s virtually nothing on cases or power supplies. The emphasis on broad compatibility with existing specifications is strong:

This emphasis on compatibility is not surprising. DTX is more or less and extension of ATX. Obviously, AMD wants to avoid what happened to BTX.

Intel tried to roll out BTX a few years ago with three sizes: full BTX, micro MTX and pico BTX to replace not only ATX and micro-ATX, but also set a new SFF form factor. Part of the impetus was to introduce a different system airflow design that could deal more effectively than ATX with the thermal problems of Intel’s hot Pentium 4 (Prescott and later) processors. BTX was not compatible with ATX cases or power supplies, however, which meant manufacturers had to use not only a new motherboard form factor, but entirely new types of cases and power supplies to adopt BTX.

This was probably the major reason that BTX did not gain wide support. It appears to be used today only by a few major Intel partners. Certainly, it’s just about impossible to find a BTX motherboard, case or power supply for sale in the retail component marketplace. (You can find BTX information at Intel’s Form Factors web site.)

In case you haven’t guessed yet, the name DTX naturally follows from ATX and BTX… although perhaps an inquiry should be made about what happened to CTX?

The following images were taken from AMD’s presentations about DTX.

A full DTX board fits into ATX or Micro ATX case and calls for 7.7 liters volume or higher.

A full DTX board is smaller than Micro ATX. It will have room for two slots, typically PCIe-16X and a PCI or PCIe.
The basic layout is not really different from ATX; unlike BTX, which repositioned the CPU to front & center.

The Mini-DTX will also have two slots, but be considerably less deep.
It’s almost as small as the 170mm square mini-ITX board; 170mm is the depth of mini-ITX.
A case of just 1.5 liters or more is required for Mini-DTX.

Mini-ITX is also shown in the AMD presentation, even though it is not DTX. It’s pretty close to Mini-DTX, which has the advantage of allowing a PCIe-16X graphics card. The other point is they that’re actively promoting AMD parts for the Mini-ITX platform. We know about this, of course; SPCR recently reviewed an Albatron KI690-AM2 Mini-ITX motherboard featuring the AMD 690G chipset

The emphasis of DTX is on 45W and 65W TDP processors, which certainly work better in small systems than hotter CPUs. DTX and Mini-DTX motherboards could easily become platforms for Small Form Factor computers produced by companies such as Shuttle, AOpen, Asus, and Dell. This is certainly what AMD hopes for. Most SFF systems appear to use entirely proprietary motherboards, cases and power supplies. A few use PicoBTX boards which measure 203mm wide by 267mm deep, slightly bigger than DTX. However, they don’t all appear to have strict conformance to picoBTX specs, as manufacturers often opt for proprietary peripherals or aspects that allow the boards to be more easily integrated with pre-existing solutions in their lineup of components.

Establishing successful SFF standards is important for the industry as computers keep shrinking in size. Standardization would help to grow involvement by more players, in much the way the ATX form factor spec paved the way for a consolidated boom in the PC marketplace some 15 years ago. The growing success of Mini-ITX, created by VIA some years ago, especially in the industrial PC marketplace, is a positive sign. There have been many mini-ITX boards for Intel mobile and desktop processors, but a visible breakthrough for mini-ITX probably came last spring when Dell introduced the tiny EC280 desktop computer, a low cost mini-ITX based PC for emerging markets. It features a 1.2GHz Intel Celeron M 205, and a SiSM661GX chipset, possibly a close relative of the Intel "Little Valley" D201GLY mini-ITX motherboard. The EC280 appears only on their Chinese-language China web site (not Hong Kong), the current price starting at RMB 2,299 (~US$306).

The compatibility of mini-DTX with mini-ITX was carefully planned. Mini-ITX boards for AMD processors have only just begun to appear. The Albatron KI690-AM2 Mini-ITX motherboard featuring the AMD 690G chipset is only one of a small handful we know of. Obviously, AMD aims to expand their reach into the SFF world with DTX as well as mini-ITX.

AMD engineers have been working on reference DTX motherboards and systems, of course, despite their caution that it’s up to their partners to produce components and systems for sale. AMD offered a reference DTX system for SPCR to try, describing it as a work in progress. We accepted the offer; we’ve had a week to play with the system. 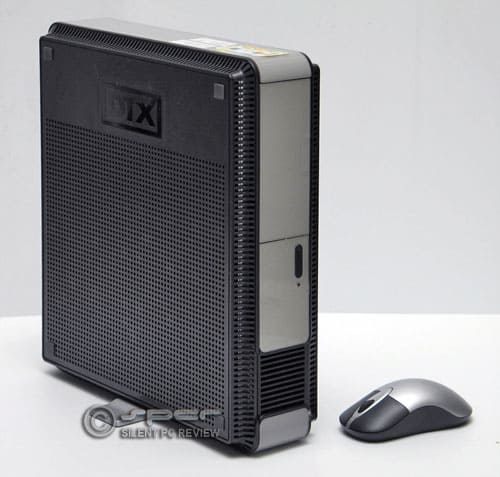 Yes, this is the same DTX system pictured on the front page, next to a typical wireless mouse.

The prototpye board lacks HDMI and eSATA or Firewire.
Only low profile cards can be used , but vendors can use different case configurations, including a different PSU type. 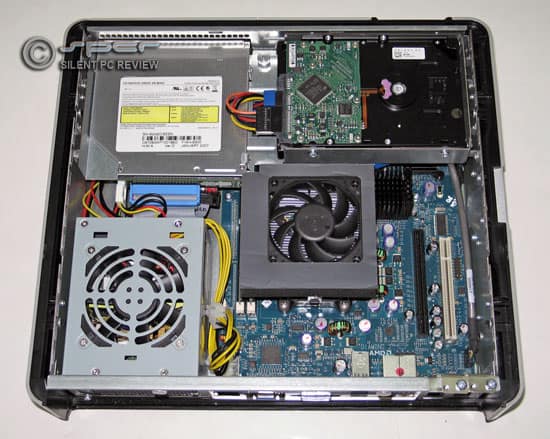 It’s packed quite tightly. Note use of SFX power supply and stock AMD heatsink fan.
The CPU fan draws in outside air through a vent in the chassis cover.
The PSU fan was missing an intake vent, which meant it ramped up in speed, even while idling. 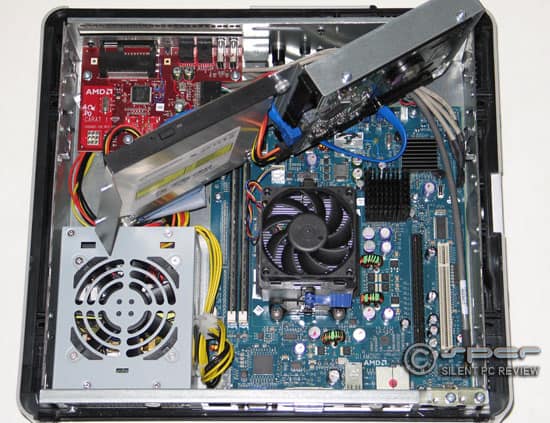 The optical and hard drives are mounted on a tray removed by undoing a single thumbscrew.
There’s space and vents at the front corner for a small intake fan if needed for an add-on graphics card.

It is a compact, minimalist system with a motherboard based around the excellent AMD690G chipset, which integrates the ATI X1250 graphics chip, capable of running HD video with a fast enough CPU. (Any AMD A64 processor running 2.4 GHz on this chipset will do any type of HD.) It came with a gig of RAM and an AM2 BE-2350 (dual core 45W processor running at 2.1 GHz), and with Vista Home Premium preloaded. The system is reasonably presentable with rough edges in presentation, BIOS options and acoustics. No serious measurements or tests were run; there are many reviews of such components which show what kind of performance can be achieved. The range of applications tried worked smoothly, much as expected from such a system.

The sample system ran too loud for our taste, due mostly to a thermally-controlled power supply fan that was over-eager to cool in the absence of a vent for fresh air intake. The measured SPL was around 30 dBA@1m right after bootup, but within a few minutes in idle, the PSU fan sped up and became louder, measuring some 38 dBA@1m. At full load, the noise reached nearly 44 dBA@1m. All this noise was directly attributable to the PSU fan and its lack of intake airflow. Thermal sensors on the motherboard did not work properly with any monitoring utilities we tried; suffice it to say there was no obvious evidence of misbehavior, meaning the system was not overheating. All this, despite relatively high efficiency in the PSU, which drew only ~48W at idle and 89W at peak maximum load.

AMD pointed out that this weakness in the rerefence design had already been noted and was being modified. So the reference system is really just a preview, a snapshot of a work in progress — and the work has already moved beyond this photo, as the details are being changed.

As with any form factor specification, perfection will be in the details… of design implementation and execution. Nothing in the publicly available 10-page DTX specifcation supports AMD’s statement that "low acoustic noise will be fundamental" to the definition of the DTX specification. Unless the spec undergoes dramatic expansion, it seems more realistic to expect that some models will be quieter than others, as usual; some by design and others by happenstance.

DTX looks like an eminently viable platform option for both SFF computers as well home theater or media PCs, the latter especially with the current AMD690G chipset. (Competitive performance chipsets for both AMD and Intel platforms are sure to follow, however. It’s the way of the tech world.) The compatibility that AMD has obviously worked hard to achieve in DTX should encourage vendors in both enthusiast DIY and OEM sectors. Now it’s a question of just when. We look forward to the retail products whenever they arrive — hopefully sooner than later.

Much thanks to AMD for the chance to examine this reference DTX system.