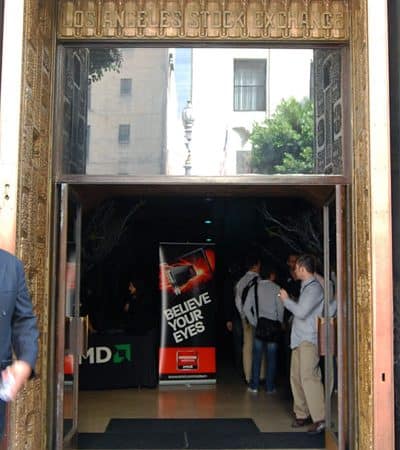 The HD 6800 series cards are officially launched today, as any tech media reader is well aware. The 6870/50 cards are featured in umpteen reviews already — AMD feted a hundred tech journalists in Los Angeles for two nights last week. Our brief report and musings on the new cards and on the event.

AMD’s Radeon 6000 series graphics cards launch will already have unrolled en-masse on the web by the time you read this. Today is the official launch date, and at least a handful of the hundred or so tech journalists flown to LA last week and feted at AMD’s expense for two nights at the Hyatt Regency Century Plaza will have posted reviews of the HD 6870 and HD 6850 cards.

The LA extravaganza was AMD’s biggest PR event in recent memory, with about half the hundred tech geeks writers coming from across the Atlantic and the rest from the Americas, including Latin America, with about as many AMD and partner personnel on hand to manage the event. More about that in a moment while we tackle a summary of the new cards

A quick morning search around the web coughed up this preliminary list of articles in the 6000 series launch; many more will surely appear in the next few days:

These reviews will inundate you with benchmarks and gameplay comparisons against Radeon HD 5000 series as well as competitor nVidia 400 series cards. Even if we wanted to, we could not add to the fray at the moment. Our sample cards are delayed, somwehere in transit — hopefully not lost, as the initial run of reviewer samples was limited. We leave our performance-obsessed colleagues to fill in all the details, but we can summarize simply…

ABOUT THE STOCK COOLERS

When the first blow-out-the-back heatsink/fan was introduced as the Arctic Cooling VGA Silencer back in 2004, we applauded. It soon became universally accepted, and the basic design — a blower or squirrel cage fan combined with a directed airflow path through heatsink fins and out the back — is employed currently by both nVidia and AMD. While this design is effective with GPUs at 50~100W, is it as effective with >150W cards? Arctic Cooling certainly doesn’t think so, and nor does any other high performance aftermarket VGA cooler maker. They are all using large open heatpipe/heatsinks with multiple fans blowing directly through them. The basic problem is that higher airflow is needed, with larger heatsinks, and this blow-out-the-back designs limits airflow to that which can be produced by the integral fan, which acts, in essence, as a gatekeeper for airflow through the fins. As a result, no amount of external airflow blown at the cooler improves the cooling much. When you consider the size and cooling surface of the best heatsinks for CPUs — which now are way cooler than the hottest video cards — the stock Radeon 6800 series coolers look inadequate.

At the 6800 series launch event, we discussed this issue with David Bowman, an AMD product manager intimately familiar with the physical design. His answer comprised of these points:

In other words, AMD recognizes the limitations of their reference cooling solution but need to adhere to PCIe specifications for OEMs and rely on their channel partners to offer more creative solutions for the retail market.

In spite of AMD’s excellent marketing/PR efforts on the 6800 series launch, for us, the most interesting aspects were less about the cards themselves and more about the event and "Big Picture" considerations. Our musings, in no particular order…

1. Later 6000 series cards will actually be more interesting. The HD 6870/50 cards are not particularly exciting because there is no performance leap over the 5000 series, but the more subtle evolutions such as improved power consumption, more multiple monitor support, and lower pricing will help AMD keep its edge over nVidia.

2. As AMD informed us earlier in the year, the ATI name is being phased out. The new cards are embossed only with the word Radeon and the model number.

3. LA Stock Exchange Venue – The "Tech Day" presentation (all five hours) and evening wine/dine was held at the building which housed the LA Stock Exchange until 2001. It is now the "Stock Exchange Niteclub", described thus online: "It is hard to find foot space here if you decide to haunt this place later in the evening, as it’s always crowded. Hi-fi sound systems and glaring lights make for a cool nightclub atmosphere. Live music and the young, hip crowd are just energetic enough to set you tapping your feet." A cool venue.

4. Oddly enough, the real action was happening outside the club that evening, as Spring Street (where the Stock Exchange is located) came alive with people and music in one of LA’s monthly Downtown Art Walks, described by one Yelp reviewer as "the monthly ritual of hipsters, food truck fiends, and corporate oppressed minions attempting to revolt against their overseer through drunken dabauchery."

5. The choice of Los Angeles, the home to the US movie industry, was apparently no accident. AMD’s tie-in to Hollywood is strong, as its graphics cards are employed by many CGI houses. Roney Brunet, digital effects artist for Troublemaker Studios, showed a scene from the comic-violent movie Machete where three people are decapacited in one swing of the title weapon, broken down to its constituent elements, down to the wire frame level where the "heads" were bouncing. The DirectX 11 shooter game Medal of Honor was demo’d on the big 3-pane screen in AMD’s presentation, and out on Hollywood Blouvard, the same game was getting big billboard coverage.

6. It’s the first time that AMD has brought together all the tech journalists from both Europe and the Americas in one event. Why? More bang for the $? The conjectures among some of the attendees conferred were that the total cost of a single event is probably similar to having two or three smaller ones. A single event for the launch made it possible to do more. (Intel’s IDF events are bigger and draw a much bigger audience, not just journalists but also partners who mostly pay to attend "Intel University".) It was interesting to chat with both journalists and AMD PR staff from the EU, Russia, Argentina, etc. It is a small world, but there are still many variant perspectives even on what seem to be purely technical matters. Fascinating, too, how the journalists were 100% male; the only women were a handful of AMD PR staff.

7. The most tantalizing information came in a presentation by Matt Skynner, VP of AMD’s GPU Division, on Fusion APU development. AMD’s first Fusion APUs will come to the mobile market and energy efficient desktops by the end of the year. Mid-performance APUs will probably not appear till mid-2011.

Fusion is shaping up to be a major divergence from Intel’s approach to CPU/GPU integration. Here is a pretty good overview by John Peddie Research:

"The leading companies integrating graphics within the CPU are AMD and Intel. Via, IBM, and other x86 compatible suppliers haven’t given any indications of their efforts or interest in such integration.

"Heterogeneous Processor Unit—HPU. AMD is betting on being its own best competition in the low-end and midrange discrete GPU market. Leveraging its compute density success with its discrete GPUs, AMD will transfer that technology to the CPU in what they are calling an Accelerated Processor Unit—APU; what we have designated a HPU.

"Embedded Processor Graphics—EPG. Intel believes consumers will not make a conscious purchasing choice in the market below the Performance segment and for Performance, they will choose the best CPU and an add-in-board (AIB.) For the non-graphics functions that a GPU could aid (i.e., transcoding) in consumer systems, Intel will embed function-specific blocks in its Sandybridge processor due to debut in the first quarter of 2011. Traditionally, in electronics and semiconductors, a dedicated function, known as a state-machine, can offer a faster, less expensive solution than a programmable device. Therefore, Intel will not provide a massively parallel processor in their CPUs (as AMD is doing) and instead will provide their traditional “good-enough” graphics approach with embedded processor graphics—an EPG. This philosophy has served Intel well in the past, and so they will refer to their chips as “Processor Graphics,” or PG. Intel will not recognize the term EPG, HPU or AMD’s marketing term “APU.”

"As for GPU-compute functions, Intel believes the people who employ such systems represent a small market and will use a high-end AIB rather than a low-end or midrange GPU (embedded in a processor) for such tasks. As for less demanding compute functions that might benefit from a parallel processor architecture such as encryption, video and photo filtering, or even physics, Intel will develop specialized API callable function blocks. Intel thinks this will save silicon, power requirements, and costs while offering equal to superior performance.

"These divergent paths further illustrate the inflection point the industry is about to experience. Whereas AMD sees the world as needing a powerful SIMD parallel processor array, Intel sees it as the normal, historical path of natural evolution of functions—just as the numerical processor, the cache controller, memory controller and soon transcoder have been assimilated into the CPU, so will other acceleration functions but in a semi-dedicated fashion rather than a complex general-purpose parallel processor fashion.

"And thus the battle begins

"An HPU is a processor capable of performing massive parallel processing operations while simultaneously performing complex high-speed scalar operations on multiple cores. The HPU will truly revolutionize the PC and associated industries and many new applications will come forth to take advantage of this new low-cost powerful multi-faceted compute engine.

"The adaptation, understanding, and implementation of GPU-compute applications, both new and retrofitted, are just beginning to take off. The primary benefactors and so far only suppliers of this new wave of powerful computational capability have been the suppliers of the large-scale GPUs. Light-weight consumer applications that benefit from parallel processing like transcoding, image processing and enhancement, and of course games, will see immediate benefit from the HPUs, and that will have a snowball effect on the market and suppliers.

"However, with two solutions to these applications: EPG and HPU, the software developers face the dilemma of having to support two approaches, and given the costs of software development and maintenance many will choose not to do so. The HPU solution will have to show significant and compelling reasons to the ISV community to get accepted."