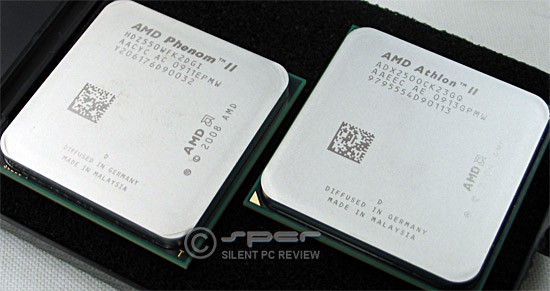 AMD’s newest processors, the Phenom II X2 550 Black Edition and the Athlon II X2 250, priced aggressively at $102 and $87 respectively, are aimed squarely at the bread and butter value segment of the desktop processor market. We take a look at their non-gaming and energy efficiency performance, and compare them against likely Intel competitors.

Today we will be looking at two of AMD’s newest processors, the Phenom II X2
550 Black Edition, and the Athlon II X2 250. Priced at a suggested retail price
of $102 and $87 respectively, they are aimed squarely at the bread and butter
value segment of the desktop processor market. Not only are they the first dual
core parts for the AM3 socket, they are also the first dual core AMD chips manufactured
using the same 45nm fabrication process as the Phenom II X4’s.

The Phenom II X2 550 Black Edition runs at 3.1 GHz, has an unlocked multiplier
and a thermal envelope of 80W. The Phenom II X2 series (code name Callisto)
are simply Phenom II X4 900’s with two cores disabled, and as such they have
a healthy 6MB of L3 cache. Manufacturing defects will often produce CPUs with
one or two faulty cores, so recycling them as dual and triple core CPUs is a
very economical strategy. This also opens up the possibility of processors with
four good cores being repackaged as dual cores to satisfy demand, though this
may be rare due to the popularity of the Phenom II X4 series.

"Regor" is AMD’s code name for their Athlon II X2 processors. These
parts have only two cores on the die and no L3 cache, though they have twice
as much L2 cache. The X2 250 is easier and cheaper to manufacture, resulting
in a reduced price tag and lower 65W thermal design power. It seems appropriate
that the Athlon name is reused for these processors. Like Callisto, Regor is
an AM3 part so it can be used on both of AMD’s current desktop sockets. The
Athlon II X2 250 is clocked at 3.0 GHz.

Cool’n’Quiet and/or Intel SpeedStep were enabled (unless otherwise noted).
The following features/services were disabled during testing to prevent spikes
in CPU/HDD usage that are typical of fresh Vista installations:

Both our Intel and AMD systems consist of a moderately priced motherboard with
DDR3 memory support, 2x2GB of DDR3 memory in dual channel set to the same speed
(when possible) of 1333 MHz with timings of 9-9-9-24. A GeForce 9400GT graphics
card, WD VelociRaptor and OEM Seasonic power supply round out the test configuration.
Both AMD chips were tested at stock settings and with the core voltage decreased
to the minimum stable level (from 1.275V to 1.175V for the Athlon II X2, and
from 1.325V to 1.1875V for the Phenom II X2).

The power consumption of both chips was much higher than that of our Core 2
Duo E7200 sample. The Athlon II X2 came close when idle (3W more) but during
video playback, the system power draw was 17W higher and at full CPU load, the
difference doubled. The Phenom II X2 was worse off as expected, idling 8W higher,
drawing 18W more during video playback and 41W more at full load. From these
results one may think that either Intel is very conservative with their power
ratings or AMD is very loose.

The Phenom II chip was between 5% and 28% faster in our tests (average of 16%)
compared to the Athlon II. As the X2 550 is clocked only 100 MHz higher, the
6MB of L3 cache is likely what gave it such a sizable performance advantage.

When it comes to absolute energy efficiency (i.e. the average AC power used
by the system multiplied by the time it took to run each test), the E7200 came
out on top once again. Between the two AMD chips, the Phenom II was slightly
more efficient — it completed the benchmarks fast enough to offset its
higher power consumption. The difference between the two was virtually nil once
we undervolted the Athlon II.

Performance on the AM3 platform is only one part of the equation. As many users
have AM2+ motherboards, it is prudent to see how power consumption and performance
differed on AM2+. For AM2+ testing, we used an Asus
M3A78-T motherboard and 2x2GB of G.Skill DDR2 memory running at 800
MHz with 5-5-5-16 timings.

General power consumption was similar on both platforms for both of AMD’s new
processors. Both CPUs used a few watts less on the AM3 platform, but it was
too little to cause any concern.

The Athlon II performed slightly better on the AM2+ platform, but used more
power in all the tests it won. The Phenom II X2 favored the AM3 test configuration
in the same way. This is rather appropriate seeing as the X2 250 is the cheaper
processor and more likely to be paired with an AM2+ motherboard.

From our tests results, we would say the Phenom II X2 550 Black Edition is
comparable to the $113 2.66 GHz Core 2 Duo E7300. However, the 2.80 GHz E7400
shares the same price-point. The recently released Pentium E6300 is also a compelling
product — it is essentially an E7400 with 1MB less L2 cache and is priced
at only $84. From a pure price/performance standpoint, the X2 550 underperforms.
If you take power consumption into consideration, things get worse. If our E7200
sample is indicative of the average power consumption one can expect from all
of Intel’s 45nm dual core chips, any of them could easily wipe the floor with
the X2 550 in an energy efficiency contest. At idle, they use about the same
amount of power, but at load the difference is about 40W.

The X2 550 BE has a few less measurable advantages, however. It supports AMD-V,
AMD’s virtualization technology which is required for Windows 7’s XP mode, which
runs XP in a virtual machine to solve potential compatibility issues. The next
iteration of Windows is heavily anticipated, and this feature may bypass many
of the issues that plagued PC users when they adopted Vista. The E7000 and E5000
series do not support Intel’s version of the required technology (Intel VT)
— the only dual core Intel chips with VT are the more expensive Core 2
Duo E8000 family and the older discontinued Core 2 Duo E6000 line. The X2 550
also has an unlocked multiplier, so it should be easier to overclock. In addition,
there are reports that the 3rd and 4th disabled cores in some X2 550’s can be
unlocked to give users a free, high-speed quad-core upgrade. How well retail
samples unlock and whether or it can be done stably with any amount of certainty
is impossible to know however.

The $87 Athlon X2 250 was about 20% slower than the X2 550 in our tests, so
we expect the E6300 or even the E5400 would probably be better performers. The
X2 250 used 34W more on load compared to the E7200, and though our sample undervolted
fairly well, it narrowed the gap to only 20W. The X2 250 also supports AMD-V,
but it does not have any extra cores that can be potentially unlocked or an
unlocked multiplier to aid in overclocking.

Intel’s advantage is simple: their chips perform well for the price and are
more energy efficient. Depending on how often and how heavily the system is
used, the savings on your electricity bill could be significant. As Intel’s chips
use less power, they also dissipate less heat, and are thus easier to cool in
a quiet and/or silent fashion.

AMD holds one critical advantage. Compared to Intel, motherboards for AMD CPUs are cheaper, offer more features, and have better integrated graphics — everything users look for in a budget PC. For example, today you can spend $80 on the Intel-based Gigabyte GA-EG41M-US2H from Newegg. Alternatively you could pay $80 minus a $10 mail-in rebate for the AMD-based ASUS
M3A78-EM, and get a faster IGP, 4 memory slots instead of 2, an
extra SATA port, 2 additional rear USB ports, and extra connectivity in the
form of eSATA, FireWire, and DisplayPort connectors. Amazingly, an extra $50
is required to get an equivalent Intel board.