Anitec Computers of Vancouver, BC is now offering a new SPCR-certified PC for silent PC seekers in Canada. This unique, compact, capable computer combines best-of components for the lowest SPL measured of any retail PC examined by SPCR.

Anitec Computers is the system integrator and vendor of these systems. SPCR has no involvement whatsoever in their sale, distribution or servicing; only the verification of acoustic and thermal design objectives in the production sample supplied by Anitec. For details of the partnership, please see SPCR Certified Computer Systems.

A slim, compact all-purpose personal computer, the acoustic signature of the SilenT3 is below the ambient noise level of most urban homes. It has been designed for the same constant low noise level within a wide range of work loads, from idle all the way to maximum load, in a broad range of ambient temperatures. Based around an Asus T3 barebones system, this PC is very small and attractive enough to complement any decor.

The design goals for SPCR SilenT3 were: 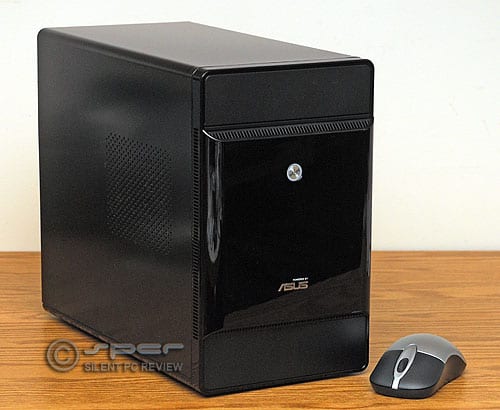 Asus T3 barebones system is the base.

COMPONENTS in SilenT3 Base Configuration

The performance of the system is perfectly good for all applications, including playback of HD 1080p video. The C2D E7300 is a good processor choice for the machine, as is the GF 9400GT video card, which offers HDMI output and capable enough with 3D to allow casual gaming. The Seagate laptop drive is a touch slower than typical 3.5″ 7200 RPM drives, but it will hardly be noticed by any user, while the low noise level affording by its inclusion will certainly be appreciated.

The Asus T3-P5945GCX features a clam-shell style case which allows the use of a full ATX12V power supply and a custom form factor socket 775 motherboard with Intel 945GC chipset. A key aspect of Anitec’s customization is the replacement of the stock power supply with an Enermax Modu82+ 425W modular cable power supply. The Modu82+ series is one of the most energy efficient on the market, and offers the best acoustics of any fan-cooled PSU. (See SPCR’s review of the Modu82+ 625W.) Despite its role as the primary heat extractor for the system, because the thermal envelope has been kept way down, the thermally controlled PSU fan spins at extremely low speed at virtually any load.

The system came with Windows Vista Home Premium installed, with these settings engaged:

Temperature, noise and AC power consumption were measured under various loads in ambient conditions of 11 dBA and 21~23°C. These tests were performed mostly in SPCR’s anechoic chamber, as shown below.

All the temperatures were modest, well within safety limits. The measured SPL never changed, and this reflects the subjective experience: The computer always sounds the same. The noise can be described as a barely audible hum. A bit of muted clicking noise is also audible when the hard drive is seeking. Atop the desk, even just 2′ away from one’s head, it’s difficult to hear when there’s any other noise. Greater than 3′ distance, you have to work to hear it.

The following recording, made in the anechoic chamber with a lab reference audio recording system, lets you hear the sound for yourself. The original was made as 24-bit / 88 kHz WAV files with a high
resolution, lab quality, digital recording system inside SPCR’s
own anechoic chamber (11 dBA ambient), then converted to LAME 128kbps
encoded MP3s. We’ve listened long and hard to ensure there is no audible degradation
from the original WAV files to these MP3s. They represent a quick snapshot of
what we heard during the review.

The recording starts with 7s of room ambient, followed
by 8s of the product’s noise. For the most realistic results,
set the volume so that the starting ambient level is just barely audible, then
don’t change the volume setting again while comparing all the sound files.

This system is the quietest commercially built system we’ve tested or heard, by a small margin. The use of the laptop drive, is probably the single biggest factor in achieving this result.

Because the speed of the PSU fan is thermally controlled, a check was made of acoustics at a much higher ambient temperature, to simulate hot summer conditions. A 900W radiant space heater was placed about two feet diagonally in front of the PC and left for nearly an hour with full load testing ongoing. When a thermometer placed at the front of the PC read 30°C, measurements were recorded, as shown below.

There was a slight increase in the PSU fan speed, but the overall noise barely increased, neither subjectively nor by SPL measurement. Temperatures remained perfectly safe. It wasn’t possible to achieve higher ambient temperature in our lab, but it’s safe to say that in hotter weather, the PSU fan may speed up more and the whole system may get louder. In such weather, you probably wouldn’t spend much time in front of your computer.

Note: Anitec Computers also offers this system without any operating system for those who already have their own.

The SPCR SilenT3 by Anitec Computers works exactly as intended. It is highly capable and virtually silent.