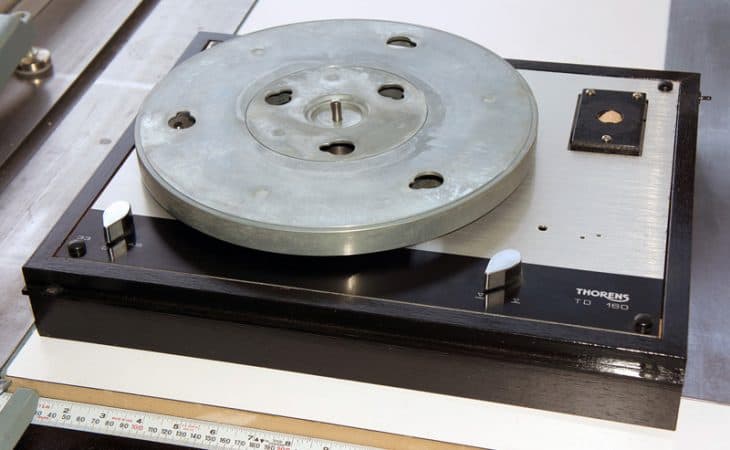 The Thorens TD160 is a poor man’s Linn, and still amazingly popular as the vinyl revival continues. This is the story of a 160 reborn, with many components “borrowed” from the Linn.

The AR Turntable (1961), the Thorens 150 (1965) and the Thorens TD160 (1973)
are the progenitors of the UK floating subchassis turntable wave that began
with the first Ariston, which more or less became the Linn LP12 in 1973. The
Linn LP12 managed to stay in production continuously since then, morphing in
many ways to become an elder statesman of vinyl play, with the top Klimax
LP12 today priced at around £15,000. The first LP12 models were more or
less a better execution of the Thorens 150 and 160, with better quality parts
and finer precision.

The Thorens 160 is long out of production, but remains a perpetually popular
record player among enthusiasts, having enough of the core qualities that made
the LP12 so successful, at a fraction of the cost on the used market. It is
also a popular target for restoration and modifications. A professionally restored
Thorens 160 can fetch US$1,600~$2,000 even with a fairly modest tonearm like
a low-end Rega.

I acquired a moderate quality sample of the TD160 early this year. It came
without a tonearm. Functionally, it was sound enough. The motor was quiet, its
shaft straight, the pulley in good condition. The platters were OK, if a bit
oxidized over the decades. The main bearing showed a bit of wear, but all-important
point and sides were unscratched. A slight pock mark showed the wear of the
10mm shaft point at the bottom of the main bearing housing, but very close listening
with a stethoscope in my anechoic chamber revealed no low frequency noise when
spun by hand.

The previous owner had removed the original Thorens TP16 tonearm in favor of
another, and he had drilled a hole for the armrest of that other tonearm, and
there were also holes left on the top plate left behind by the removal of the
original armrest. The teak veneer plinth must have been in poor shape because
it had been painted thickly with semi-gloss black paint. In short, this TD160
was ready for the major makeover I planned.

Most audio enthusiasts are familiar with the concept of a platter/main bearing
bolted on a subchassis that is suspended on springs riding on bolts which extend
down from the top plate. The motor is secured to the top plate and isolated
from the platter/tonearm by the springs and resilient belt. What the drawing
below doesn’t show is that the tonearm is also attached to the subchassis.

The TD160 has a 16-pole synchronous AC motor with a 2-step pulley made of
high quality plastic, and a mechanical switching arm that allows 33 or 45 RPM
with a simply turn of the switch on the front panel. Both the top plate and
the subchassis are made of plain sheet steel, although the top plate has a stylized
layer of aluminum glued to it for cosmetic reasons. I didn’t take any photos
of the underside; it was no different than a dozen other TD160s I’ve examined
over the years.

An Aside: Looking with the clarity of hindsight, the floating
subchassis introduced another variable for speed instability, the very real
possibility of relative movement between platter and motor, either due to external
shock, or transient increase in drag from a highly modulated part of the groove
or even a burp on the AC line. This has the potential to affect speed stability.
Awareness of such issues didn’t escape the engineers of the time, surely, but
one thing the soft spring subchassis turntable did better than all its competitors
— when properly placed on a rigid stable table — was to avoid acoustic
feedback and reject external vibration. It was, at the time, so much better
than anything else, that perhaps the other factors paled in comparison

A NEW PLINTH FROM RECOVERED WOOD

The first task was to build a new plinth. There was a strip of Mahogany wood,
probably from Central America originally, recovered from a partial renovation
project I helped with in our house a few years ago. It had been part of a beat
up banister. I had hoped it could be cleaned up and used for a turntable plinth.
There wasn’t enough of it for the larger TD125 project I’d already done, but
there was just enough for this TD160. I spent time cleaning up the wood piece,
planing and then sanding it. It was far from perfect, as there were some small
holes that looked like they’d been made by parasites in the original tree, and
the grain was not perfectly consistent. But I love the idea of repurposing old
things, so I went ahead and miter-cut four pieces to size.

At this point, I decided that the top plate, with its additional holes, had
to go. I ordered a new cosmetic top plate from a Swiss dealer on eBay selling
"New Old Stock" (NOS) Thorens parts. It would be nearly US$100 delivered,
after taxes, but I felt the cost justified.

I was also looking for a suitable tonearm, one that would mate well with a
wide range of cartridge, including higher mass, lower compliance moving coils.
I found just what I was looking for: A used Linn
Akito tonearm, probably from the early 1990s, in very good condition,
except for the usual mounting marks around the headshell. I’d actually sold
and owned these tonearms before, and knew them to be significantly superior to
Rega tonearms of similar price, with much better bearings and as good rigidity
in the armtube and headshell, which is fixed. The Regas have a justified repuation
especially in the UK, for excellent value, but the bearings of the lower priced
models never impressed me, and the single large nut to secure the arm to the
turntable was never as functional as the Linn 3-bolt setup, which also eases
tonearm height adjustment.

The NOS Thorens top plate didn’t have the same markings as the original, but
this seemed moot, as the turntable was being transformed anyway. I peeled the
old aluminum skin away first.

At this point, I decided to improve the internal damping of the subchassis.
The subchassis in this type of turntable is arguably the most important mechanical
part. It holds the main bearing and platter as well as the tonearm; everything,
in fact, except the motor. Improving the rigidity and internal damping of the
subchassis has been one of the biggest areas of evolutionary development in
the Linn LP12 over the years. In the TD160, the subchassis is also the easiest
to access and modify.

I happen to have some heavy elastomer sheets with adhesive backing, made expressly
for the purpose of damping the sheet metal in PC cases, to help improve their
sound blocking and reduce the effect of vibration. This was marketed by Acousti
Products a decade ago; they are still in the business of IT noise control,
now more actively in sound containment server cabinets. The material is easy
to cut with a pair of scissors and utility knife.

A setup jig table for the Linn LP12 is too big for a standard Thorens TD160,
but just about the right size with my new Mahogany plinth. The turntable was
set on it, the jig leveled, and then the turntable suspension leveled and fine
tuned for "good bounce". Getting a good bounce for a turntable may
seem odd, but Linn owners know the concept well. It’s simple in theory: The
suspension has to move in order to work, and you want it to move as linearly
up and down as possible. Each spring is a spiral, and thus has a lateral component
to its motion. By twisting each spring in turn, their lateral forces can be
cancelled out so that only the vertical motion is left. When done well, a Linn
LP12 moves up and down very smoothly and easily to any physical impetus, assuring
the best tracking and high isolation from feedback and shock. This is not so
easily done in the TD160, which was never designed with such adjustment in mind.
But after some patient work, a reasonably free and linear suspension movement
was achieved and the tonearm cable "dressed" to not interfere with
the suspension.

Linn’s "magic" black oil, which they introduced for the main bearing
in the late ’80s, was used to lubricate the main bearing (about 25 drops) after
a thorough cleaning. A quick check of the inner platter’s motion under actual
motor drive showed no wobble of any kind. A new belt completed the remake.

The finished product looks something like a cross between a Thorens TD160 and
a Linn LP12 for obvious reasons.

This reborn Thorens TD160 has been spinning LPs in my system for a couple of
weeks now. It sounds really good, with excellent dynamics and detail, zero sense
of speed instability, very low noise both off the LP as well as mechanically.
Three ways it could probably sound even better:

Much as I have enjoyed building and listening to this Thorens TD160, it is
looking for a new home. I already have several other turntables, and more in
the process of being built. If you’re interested in this fine, unique, hand-built
turntable, get in touch with me.