Antec P100 Case: Performance One on a Budget

The Antec P100 is a slimmed down, budget version of the P280, an attempt to bring Performance One to the US$70 price-point.

Antec was one of the first manufacturers to make a serious attempt at merging quiet and performance case design. A collaboration with SPCR editor Mike Chin culminated in the P180, which I consider the most influential ATX case model of all time. Even a decade after its release, elements from the P180’s design can be seen in practically every tower available today. Through the years, Antec has produced several revisions, but they stayed more or less true to the original layout except for the P280 which introduced a completely open front vent scheme, a non-removable drive cage, and abandoned the separate power supply compartment.

The P100 is currently the only low cost variant of the Performance One line, a trimmed down version of the P280 that does a fairly nice job passing as its bigger, better equipped brother. From the outside, this US$70 model looks remarkably similar. It has the recognizable solid aesthetic, open front air vents, dual fan placement on the top, and exposed front ports over a shimmering front facia. The door is actually plastic with a smooth glossy layer that could easily pass as aluminum. Being a budget model, its not as well built, with thinner construction just about everywhere. The P100 is also smaller, being slightly narrower and about 4 cm shorter and shallower than the P280.

Having lost some height, the P100 also discards a couple of expansion slots bringing the total down to seven, and loses a 5.25 inch bay, leaving two behind, which should be sufficient for the vast majority of users. Instead of three stock fans, you only get two, but they’ve added plastic covers on the top keeping them dust free when not in use and preventing noise from leaking out of the ceiling. Larger 140 mm fans at the top and front are now an option if you prefer. Furthermore, the noise-deadening polycarbonate sheets on the side panels have been swapped out for a cheaper, less dense foam. Other than that, the two cases are quite similar.

The accessories are jammed into a plastic bag tied to one of the 5.25 inch bays inside. Antec provides a very basic product overview, a handful of zip-ties, screws and standoffs, and a pair of 3-pin to 4-pin molex adapters for the included fans.

The metal panels of the P100 are fairly thin compared to previous Performance One cases but about as good as one could expect from a US$70 model. Having a non-removable drive cage running from ceiling to floor certainly helps with structural integrity.

The assembly process is uncomplicated as all the components install using typical methods. The interior isn’t as spacious as most ATX towers though due to the non-removable drive cage that occupies the front third of the case.

The P100 ships with two 120 mm TwoCool fans which sport a standard 3-pin connector (a pair of optional 4-pin molex adapter are provided if you prefer) and a two speed switch. The ones that shipped with our sample appear to be the same as the retail model which has a specified speed of 1200 RPM. The low and high speed settings correspond to 60% and 100% when running on motherboard fan control, producing average speeds of 760 and 1140 RPM respectively. Together, the stock fans output a moderate noise level of 25 dBA at full speed, while I would classify 800 RPM and lower as quiet by my standards. 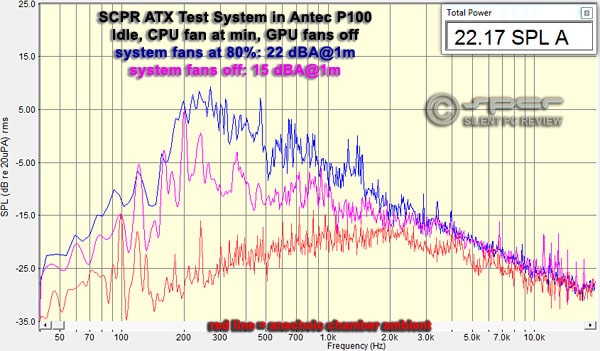 The included fans produce relatively inoffensive acoustics but they don’t sound as smooth or soft as some of the better fans on the market. They are still above average in terms of noise quality however, to the point where you don’t really notice them when combined with the noise generated by the other components.

The sound produced by the hard drive inside the case is interesting. From about a foot away, the hum of the hard drive is audible but as the drive is well isolated, no noticeable vibrations are passed to the rest of the case. The way the drive is mounted also causes its seeks to sound duller, so it thumps rather than clicks. I’m not entirely comfortable with the drive not being totally secured but I can’t deny it’s a very quiet solution.

The results of our load tests show that the 80% fan speed setting is the sweet spot, at least in terms of overall noise. Of greater interest is the sizable cooling improvement as the system fan speeds are increased with the CPU temperature dropping 4°C going from 60% to 80%, with another 3°C reduction at 100%. A 1~2°C decrease is more typical with ATX towers, even with models with more than two fans. However, the GPU fan speeds required to achieve the target temperature are fairly high at each level.

All together, this suggests that the P100 would benefit from having an additional fan, and that the exhaust fan may be more effective than the intake fan, due to the fixed drive cage getting in the way. I later found that removing the front filter had no effect on performance (incredibly rare!), confirming that the front intake vents aren’t the issue. The open sides behind the door are a great way to feed fresh air into the system. 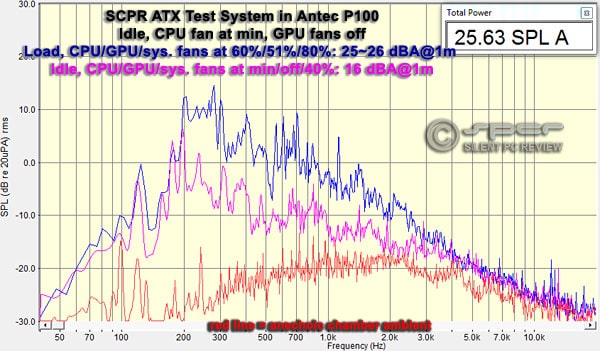 On load, the effect of a higher CPU fan speed and the GPU fans spinning up, doesn’t affect the overall sound quality greatly. The video card fans give the machine a rougher character but the system doesn’t sound at all unpleasant, aside from the actual volume.

Compared to previously tested budget cases, the P100 generates middling temperatures at a slightly higher noise level. For our system configuration, it’s not efficient as the SilverStone KL05 or the Fractal Define S. It’s notable that every other case tested had an open space at the front directly next to the video card which obviously allows for better airflow, suggesting again, that the impedance of the P100’s fixed cage is the likely cause for its somewhat higher temperatures.

To produce this more affordable version of the P280, Antec has made several changes resulting in a lower cost but also lower quality tower. The P100 is thinner all around, the door is plastic, the buttons cheaper, and the dampening sheets are less dense. Instead of three fans, you get two, and their speed switches are only accessible from inside. However, for a budget chassis, none of these downgrades sound unreasonable.

The build quality actually looks pretty good compared to the anorexic SilverStone KL05, which occupies the same US$70 price-point. The P100 is more attractive as well, as the semi-reflective brush finish mimics aluminum convincingly, giving it a splash of elegance. And while not 100% secure, the hard drive mounting system isolates the drives so well that it effectively eliminates vibration completely. It also offers a few benefits over the P280, as it supports 140 mm fans, and includes plastic panels to cover the top fan positions when not in use.

When I examined the P280 back in 2011, I had mostly positive comments, but by contemporary standards, the P100’s layout is subpar. The fixed drive cage restricts the front intake airflow and limits the length of the graphics card. The older P18x series and most modern cases use removable drive cages, resulting in both superior versatility and performance. That being said, the P100 is still a pretty solid option for a budget case, especially for a server that takes advantage of all those non-removable drive bays. However, its core design limits how well it can deal with hot, power hungry configurations.

Our thanks to Antec
for the P100 case sample.