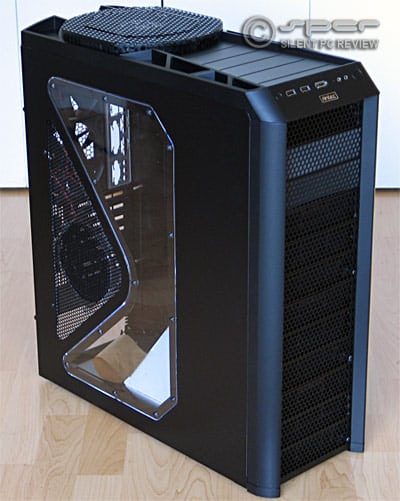 The Twelve Hundred is essentially a larger version of the Nine Hundred Two, sharing the same core design, but taller, accommodating two extra fans, an additional hard drive cage and support for the excellent Antec CP-850 power supply. It’ll be interesting to see how much difference this combination makes.

The Twelve Hundred is the grand daddy of Antec’s gaming line of cases. It is
essentially the big brother of the Nine
Hundred Two, sharing the exact same aesthetics and open, well-ventilated,
multi-fan design. The height of the Twelve Hundred is greater to allow for an
extra 120 mm front and rear fan, an additional hard drive cage, and support
for the incomparable Antec CP-850
power supply.

A quick glance at the Twelve Hundred may lead one to think it cannot possibly
be any quieter than Nine Hundred Two — this isn’t necessarily true. In
most gaming systems the main source of noise is the cooler(s) attached to the
video card(s). With more breathing room and extra airflow, the GPU fan(s) may
not need to spin as fast, resulting in a quieter, overall gaming experience.
More significantly perhaps is support for Antec CP-850 power supply which is
extremely quiet under low loads and its fan does not ramp up as quickly as most
other units. It’ll be interesting to see how much difference this combination
makes.

System temperatures and noise levels were recorded with SpeedFan and GPU-Z
(if possible) at idle and on load using 4 instances of CPUBurn K7 to stress
the CPU and FurMark with the Xtreme Burn option (if possible) to stress the
GPU.

Noise measurements were made of the case with the rear, top and one of the
front fans supplied at standard switch settings in various configurations. The
air cavity resonances inside a case amplify fan noise, as do any vibrations
transferred from the fans into the case, so these measurements can be regarded
as the baseline SPL levels for the Twelve Hundred with the stock fans.

Quality control might be a problem for these fans as we determined that 3 of
the 6 included were either defective or damaged, possibly during shipping. The
upper rear fan made a brushing type sound like something soft was rubbing up
against the motor, the upper front fan had a slight hum, and the lower front
fan had a rattle. The other three fans did not exhibit these sounds so we assume
they are the norm.

The one good rear fan is fairly innocuous sounding with a mostly broadband
acoustic profile when set to Low. The top 200 mm fan is no louder than either
of the rear ones, except at High speed. It also produces an audible clicking
sound at closer proximity which is masked by turbulence when the fan speed is
cranked up. Both the top and rear fans have 3-speed switches accessible from
the back of the case, but they can only be described as quiet when set to Low.

All the hard drive cages have their own front intake fan, each with a variable
speed controller knob at the front. The front fans are enclosed by the hard
drive cages and impeded by the front filters, resulting in a mostly turbulent
noise profile, even at minimum speed. They also have a much greater impact on
the overall system noise level due to their shorter distance from the mic.

The system with no active system fans ran fairly hot with the GPU fan spinning
at 2170 RPM just to keep the GPU at 88°C. Turning on the center front fan
at its minimum speed resulted in temperature improvements across the board,
4~5°C on average. Once the various component temperatures stabilized, the
overall noise level improved by 1 dB overall because the extra airflow allowed
the HD 4870 stock heatsink to slow by 500 RPM.

A tradeoff resulted when we shut off the front fan and turned
on the top and rear fans set to Low — the CPU and southbridge ran cooler while
the video card and hard drive ran warmer. This configuration was slightly quieter
as the front fan generates more noise than all three fans at the back combined.

To test the effectiveness of the side fan mount, we installed
a spare TriCool there and tested it against the center front fan. The rear and
top fans were set to Low. The front fan produced better results, both acoustically
and thermally. It generated 1 dBA less noise, and delivered better southbridge,
hard drive and GPU temperatures. The ATI stock cooler, encapsulated in a plastic
housing really has no use for airflow blowing from the side. Perhaps it would
do better with a more open third party heatsink. The front intake, despite being
much further away, had a greater impact.

The overall acoustics of all the configurations tested could be
described as loud, but with a smooth character. The noise was mostly broadband,
lacking tonality, whining, and vibration-induced effects. It was fairly impressive
for a gaming machine.

The Twelve Hundred’s performance was compared with several other cases that were tested with the same components, except for the power supply.

Whether due to the increased case volume, or the Antec
CP-850 power supply, the Twelve Hundred posted a small win over the
Nine Hundred Two in CPU and southbridge
temperatures, and did so with 2 dBA less noise. Our GPU temperature for the
902 was higher, but that result is a bit of an albatross as it was tested on
a day with an unusually high ambient temperature so the stock heatsink ramped
up to compensate. We adjust temperature recordings to simulate the same ambient
temperature and for the most part it works pretty well as typically the adjustment
is only 1-2°C so the GPU fan speed differences are usually minimal. Our
guess is that the GPU temperature difference would likely be nil on a level
playing field.

The 5 fans we had been testing on Low seem to be a good match
for our CrossFireX configuration as the noise level remained effectively the
same whether 3, 4, or 5 of the fans were turned on. We decided not to crank
any of the fans to Medium as the various temperatures were good enough and 31~32
dBA was already too loud.

Again, turning on the front fan resulted in a healthy improvement
to hard drive and GPU temperature and in fact allowed the GPU fan to spin 200
RPM slower. The addition of the side fan seemed to help the CPU temperature
more than anything, but only slightly. It remained mostly ineffective as it
did in our single video card configuration.

As before, the Twelve Hundred’s performance was compared with several other cases that were tested with the same components, except for the power supply. Silverstone’s Raven got added to the mix as it was tested with 4870s in CrossFireX, while the Silverstone Fortress FT01 was omitted because it was only tested with one 4870.

Our CrossFireX system configuration illustrates the superiority of the
Twelve Hundred with hotter components over the Nine Hundred Two and P183.
Usually when we add a second HD 4870, the SPL sky rockets to the level of a
blow dryer, but in the 1200, the GPU fans spun at more reasonable levels. Not so in the Twelve Hundred, which kept the GPU fans running 900~1000 RPM slower respectively compared
to the other Antec cases. The CPU temperature was also lower by a very substantial margin, and most of the other component temperatures were at least a bit lower

Interestingly, the Silverstone Raven edged the Twelve Hundred in overall noise, due mostly to better cooling for the second GPU, which ran at half the speed in the Raven. However, this GPU in the Raven test was not at 100%, as the total system power measured at the AC outlet was nearly a 100W lower than the >530W in later 4870s CrossFireX tests. We expect that with full 100% CrossFireX load, the noise level of the Silverstone Raven would likely have been similar to the 31-32 dBA of the Nine Hundred.

It should also be noted that the sound of the fans in the Raven was judged to be very smooth, better than the Antec’s fans. While all of the other parameters for these two cases were close enough to call them ties, the CPU ran 10°C cooler in the Twelve Hundred. Still, it can be argued that 56°C in the Raven is a perfectly safe temperature for the CPU.

The Twelve Hundred takes all the qualities of the Nine
Hundred Two to a whole new level. The extra height brings
several advantages: more room to breathe for all the components, the option
for two extra fans, an extra drive cage, more holes for routing cables behind
the motherboard tray, and ability to pair it with the Antec
CP-850, one of the quietest and coolest high-end desktop power
supplies around. This combination really shines in multiple GPU setups
like stock HD 4870’s in CrossFireX, posting thermal gains over the Antec P193
and Nine Hundred Two, while operating at a much lower noise level. For a gaming
or any other kind of high power system that requires a healthy amount of cooling,
the Twelve Hundred is a very nice choice.

Among all the big cases we’ve tested, only the similarly priced Silverstone Raven stands up as a worthy contender for a quiet, high-end gaming system, and its overall noise signature might be better subjectively, due to its smooth benign quality.

Fortunately, creating a quiet, heavy-duty gaming PC does not necessarily require
a case of the 1200’s size. With quality third party CPU and GPU coolers, you
could make up for the thermal shortcomings of a smaller case.

This requires more careful planning, and precise component choices. Finding a quiet power supply that won’t ramp up quickly when the system is pressed to full load would still be a challenge. The 530~540W AC power draw at full load on our translates to about 450W DC PSU power output; the fan on most PSUs would be spinning up audibly at such a load. The Antec CP-850 PSU is an easy choice,
but of course you need a P183,
P193, or the Twelve Hundred to take advantage of it.

In the end, to build a relatively quiet high end gaming system without worrying much about your components’ thermal characteristics, the Twelve Hundred with the CP-850 PSU is an obviously good choice.

Our thanks to Antec
Inc. for the Twelve Hundred sample.

The Antec Twelve Hundred is Recommended by SPCR