This clever implementation of hard drive suspension using bungee cord in a Chieftec Dragon case was first posted by Aphonos in the SPCR Forums some weeks ago. It really is a universally adaptable drive suspension technique and therefore deserves a permanent place in SPCR’s main Storage sector. Drive suspension is a much-discussed technique to reduce hard drive noise, especially seek noise. It works very dramatically, by decoupling the hard drive from the case and thus eliminating HDD vibrations from causing case panels to vibrate and make noise.

Scott has degrees in Information Systems and Divinity, presently works in the IT department of a bank, and seeks a long-term theological post. Scott regularly contributes to SPCR’s editorial efforts by proofing articles. This is his first article. 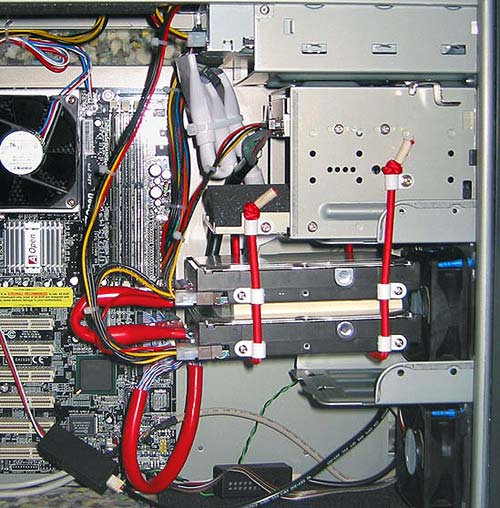 The pictures pretty much tell the story. The lower drive cage is removed. The bottom of a broken floppy drive is screwed into the lowest slot of the top removable drive cage. The bungee cord makes a U-shape under the drives. The cable clamps prevent the drives from sliding out of the back of the bungee cord. The strips of rubber carving block isolate the drives from one another and provide a means for airflow in between the drives. 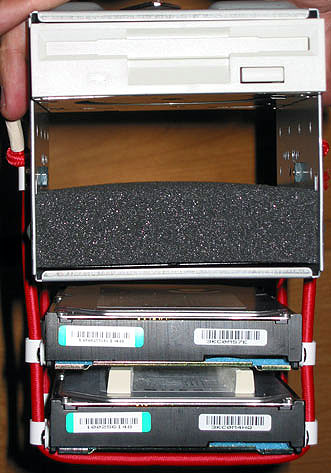 This setup allows me to put an undervolted fan right in front of the drives to provide a bit of active cooling. Seagate hard drives sometimes run a bit hot, especially when they are suspended and lose the heatsink effect that hard-mounting them to the case provides. My goal was to keep my drives as cool as possible and I set 40°C as my target. With a 5V 80mm NMB fan on the front of the case, the drives hovered around 39°C. With the fan removed, drive temps climbed into the high forties. The undervolted NMB (which has since been replaced with a 80mm Panaflo FBA08A12L1A) did not produce any extra noise (i.e. from back pressure) by having the drives so close to the fan.

It is hard to say what effect the suspending had on the drives’ noise since I’ve had them suspended from day one with this case. The single platter ‘Cudas are quiet to begin with. Theoretically speaking, suspending tends to eliminate some whine (which my Barracudas did not have) and helps prevent the transfer of vibration to the case, thus eliminating the low frequency hum that is caused by such vibration. If I pushed the drives against the case’s drive cage (above) or the lower drive cage’s bracket (below), I could create a bit of vibration and hum in the case. So, I suppose my suspending eliminated that noise source.

Seeks are quiet on these drives because (a) they are Barracuda Vs and (b) the acoustic management feature is enabled. With the case closed, the 80mm NMB quietly clicking at 5V was about as loud as the seeks on the two drives and I had to be pretty close (<1m) from the case and right in front of the PC (so as to be in line with the sound path from the front intake) to hear either the fan(s) or the HDDs.

Bungee/shock cord from www.mcmaster.com, page 1304, product # 8858T21, 3/16″ diameter. I ordered 10ft because my original idea called for nearly 6ft of cord. You could get by with less, but hey, extra bungee cord is always handy.

Bottom of a broken floppy drive from parts bin at work. If you don’t have one on hand, use any creative solution to give yourself an anchor point for the cord that holds the back of the drive (dowels, pencils, piece of plywood, an unplugged/broken hard drive, metal mounting brackets, etc)

Tape (electrical or masking) to seal the ends of the bungee/shock cord. You could also use a match or lighter to melt the end of the nylon to prevent fraying.