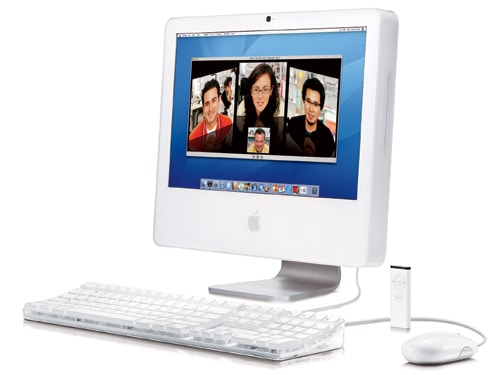 SPCR reader Randy Harris’ appraisal of his new 20″ iMac, powered by an Intel Core Duo processor, comes on the heels of last week’s PR extravaganza at the Spring 2006 Intel Developers Forum and the ensuing tech media frenzy. How does this first product of the new Apple / Intel alliance look and sound to a noise-conscious Wintel user?

I recently bought a new Intel powered Apple iMac computer, and I found myself very pleasantly surprised by its virtual silent operation for such a fast computer.

On a Windows XP machine I’m a power user. I’m the guy who everybody comes to for help when they have problems or want a recommendation when it’s time to buy a new computer or component. In my experience, when Windows XP is running well, then everything is good, but too often Windows XP can be corrupted. Sometimes all it takes is installing a program to mess things up beyond repair. Of course the more programs you install and the more heavily you use Windows the more often these faults seem to come to light. I’ve had to reinstall Windows twice this past year alone.

About two months ago my video compression programs stopped working. I mentally threw my hands up in the air and wished out loud that Vista were here today because I was done with XP! That was the last straw. I decided to seriously evaluate my options.

I do a lot of work with video footage, creating DVD’s of that footage, work a lot with Digital Pictures, as well as the usual Internet and email usage that most people engage in. When I read about Apple’s iLife 2006 suite of products I immediately thought this was a killer app and wondered why nobody had created something similar for XP. iLife’s ease of use, capabilities and full integration is something that does not seem to exist on any other platform.

I decided to give the Mac and its OS, OSX, a serious look as an alternative to my Windows XP machine. Talking with some friends who use both XP and Mac, I was very impressed that none of them have ever had to reinstall OSX or any programs – unlike me and so many others on Windows. The promised stability combined with the great Apple hardware, and the integrated iLife 2006 suite persuaded me to make the Switch from XP to OSX.

The new Intel Powered Apple Macintosh computers had just recently been announced. Deciding between the G5 iMac and the new Intel iMac, I knew that the new Intel machines are the future of the Mac. I wanted a computer that I could run for the next several years; the Intel iMac seemed to be the most logical choice. There may be a few issues until commonly used programs are written to run natively on the Intel Mac Universal Binaries. The Intel iMac should be faster than the G5, especially as the OS and programs are better optimized to take advantage of the Intel CPU.

After a visit to the local Apple Store I felt that the 17″ iMac was a compelling package at the price? but I would regret not getting the 20″ iMac.

Cosmetically, the Core Duo iMac models are unchanged from the previous G5 incarnations.

When making any large purchase I check online for deals. Amazon.com had a good deal, MSRP less a $150 rebate, free shipping, and no sales tax. The savings paid for the three goodies bought for the iMac: 1GB SODIMM memory (for a total of 1.5GB), 320GB AcomData Firewire/USB2 External drive, and a Belkin 7 Port USB hub.

I felt like a kid at Christmas when the delivery guy brought the new computer! The packaging of this computer is stellar. A lot of thought, design, and effort went into the packaging alone.

The iMac computers are arguably the sleekest, most elegant computers available today. Apple has managed to package a very fast computer and an LCD screen in a format hardly any larger than a stand-alone LCD monitor. 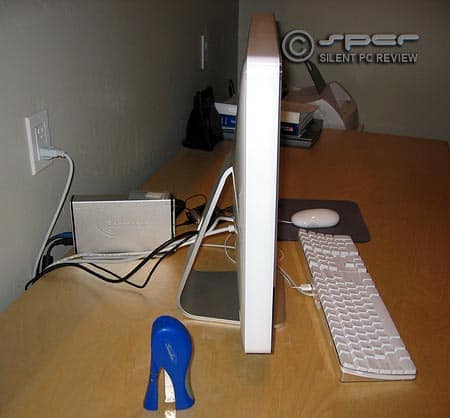 The compact monitor houses most of the iMac.

It took me less than 10 minutes to:

OSX asked a few questions during setup; this was very simple and complete with impressive graphics compared to the forms Microsoft uses to collect information. When the computer was ready to run, the first thing I noticed was the absence of marketing hooey on the computer. You know how so many computer systems cross promote services like AOL, online banks, Virus protection, etc: There was none of that on my iMac! How nice and clean.

I hadn’t used a Mac since a Mac Plus I owned in college back around 1985, I’ve been on Microsoft OS machines ever since, except for a very brief try on OS/2. In a broad sense Windows XP and the Mac OSX aren’t that different from each other and they can both do the same tasks. Navigating around the system and programs, and things like system and programs settings took a bit of getting used to. My approach was simple: Try not to configure or change things to be like I’m used to on Windows XP, but give things an honest try and see how well it works. 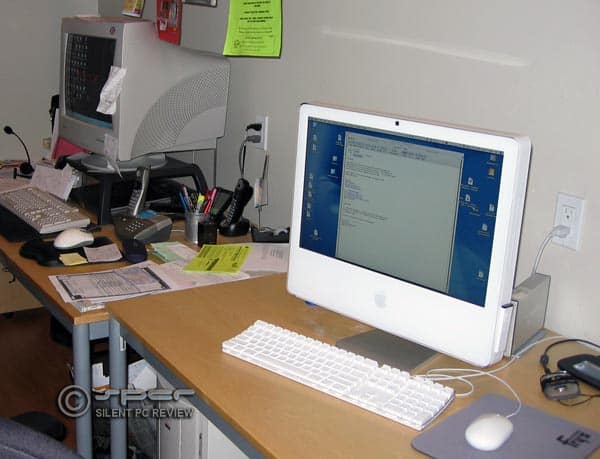 The 20″ iMac on my desk; Windows PC box below with monitor on background desk.

After just a month with the new iMac, I prefer OSX to Windows XP. I now realize that it’s the myriad of config and setup options on XP that cause people so many headaches. Windows is more of an administrator’s OS while OSX seems more like an OS for users. It is easier to get around and do things in OSX. It is less cluttered than XP. OSX needs less fussing; you just get on the Mac and do your work without futzing with the OS.

This is a key thing for me because I’m a busy guy. I put in 45+ hours a week at work, I’m enrolled in an evening MBA program, and I have a wife and two young kids. My free time is in very short supply and I find that I no longer enjoy tweaking or administering my computer. I want to use my computer as a tool to get a job done. Even if I weren’t a busy person, I am sure I could find better things to do than administering my home computer.

OSX has some built in features which require third party programs on XP, things like automating tasks, nice Calendar, Address Book, OS level usr/pwd data retention for use with programs and WWW, native PDF read/write support, native ability to mount image files, etc. Spotlight is a fantastic feature on OSX. Windows Vista is supposed to have Spotlight type function, and Windows users will love it if it’s implemented as well as it is in OSX.

My Windows desktop is an open system allowing easy changes or additions of cards while the iMac is a closed system allowing you to only add memory. Everything else needs to be either USB or Firewire. Because the iMac comes so well configured I wasn’t concerned about this. I could have opted for a Mac in a Tower Case like the G5 or its upcoming Intel successor, but didn’t feel it was necessary. 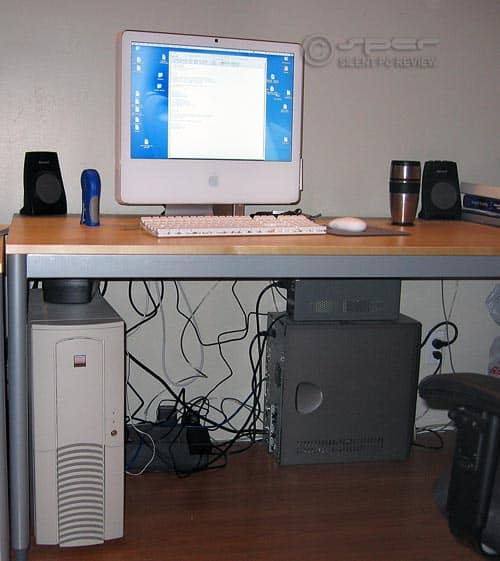 The iMac – with its dual core Yonah Intel CPU and multiple processor optimized OSX – is fast, noticeably faster than my XP/AMD 64 3000+ system. The speed difference is especially obvious when the CPUs are maxed out. In XP the overall system would respond slowly if a processor intensive operation like video encoding was going on. In OSX, even when both cores are maxed out the system still responds very quickly and always has a snappy feeling to it. This was a pleasant. [Editor’s Note: To be fair, a dual-core XP / Athlon 64 machine would likely exhibit similarly improved multitasking speed under high load as the new Core Duo iMac.]

My Windows XP Machine case is underneath my desk, only a couple of feet from where I sit. When there is no noticeable ambient noise in the house, I can hear the power supply very clearly in the XP machine, but the noise didn’t bother me much because it wasn’t harsh or high pitched. When writing to the hard drive you can definitely hear the drives working away, the drive noise bothered me much more than the fans. I never got around to suspending my hard drives with rubber because of the cost of prefab solutions, and hassle factor of doing it myself. Overall I would have told anybody that it was a pretty quiet machine, definitely the quietest modestly-fast PC I had ever owned.

I knew from some online reviews that the iMac would be quiet, but I had no idea how quiet. The iMac is by far the quietest computer I’ve ever used. It isn’t completely silent, I estimate the light hush from the fans to be roughly equivalent to an 80mm Panaflo at 7V from about a foot or 18 inches away. I don’t hear the hard drive at all even when reading and writing many GB’s. This was a very welcome surprise for somebody who highly values a silent PC! Apple has done a great job combining elegant design with extremely low noise and capable performance.

DRAWBACKS TO THE MAC

There were only a couple of drawbacks to the Mac for me. I find Quicken for Mac to be less than stellar compared to Quicken for Windows, and I use Quicken pretty extensively. This is the only big issue for me. There are a couple little programs I run which have no Mac version, but I could live without them. Luckily this wasn’t much of an obstacle for me, I still have a Windows XP MCE machine that powers my home entertainment system, so I installed Quicken on it, and I operate it via Remote Desktop from my iMac. I find this a better solution for me than switching to Quicken for Mac.

Also, my HP Scanjet Scanner had no OSX compatible drivers, so I sold the HP on eBay and picked up a Canon CanoScan LiDE 60 which is well supported with OSX. This was a minor inconvenience, but only had a net cost of about $25 to make the switch. The font Anti-aliasing on the Mac took me some getting used to. On Windows XP I never used ClearType (Anti-Aliasing). The Mac OSX doesn’t let you turn it off, allowing only light, medium and automatic settings for Anti-Aliasing.

Apple will continue to convert some Windows users to the Mac. Security on OSX is arguably better than on Windows, probably because Windows is far more often targeted by hackers than the Mac (rather than higher security in absolute terms), but the end result is the same. There is also the iPod Effect, Windows XP and Apple iPod users who may look to make the Mac their next computer.

I bought my new Intel 20″ iMac because it is a beautiful machine which runs a very stable operating system with a lot of performance and software that appealed to me. But I felt like I really struck gold when I realized how incredibly quiet the new iMac runs.

If anything I’ve written about is intriguing to you, I recommend that you give the Mac, particularly the iMac your consideration.

Much thanks to Randy Harris
for taking the time and effort to share his experience with the 20″ iMac with Core Duo.