Sometimes it is still a rat’s nest of equipment, computers, components, wires and other assorted geeky things that my home office was before the launch of SPCR. But 30 months later, the SPCR lab has taken over the downstairs kitchen and half of the adjoining TV/den. A lot of equipment, instrumentation and plain old stuff has been acquired. The most recent additions to the lab include various audio equipment acquired for the purpose of making sound recordings of computers and components. Here’s a short tour through the SPCR lab.

The first reviews for SPCR emerged from a rat’s nest of equipment, computers, components, wires and other assorted geeky things that my home office had become during many months of experimentation prior to the launch of the site. Two and a half years have gone by since those early days, and now the lab has taken over the downstairs kitchen and half of the adjoining TV/den. A lot of equipment, instrumentation and plain old stuff has been acquired, some by happenstance, others as a result of careful planning.

The most recent additions to the lab are related to the sound equipment carefully acquired for the purpose of making recordings of computers and components. It’s probably of interest to regular visitors of SPCR.

Numerous audio software was loaded in the Shuttle Zen and tried over the last few months. These include:

M-Audio WireWire 410 interface software, which comes with the hardware.

All of this software (and many others) were extremely useful in the learning process to make high fidelity recordings of PC noise sources. Currently, Steinberg WaveLab is the main tool of choice, for many reasons. It is used to capture the sound as a high resolution WAV file, and also to create 44.1kHz / 16-bit / 96kbps MP3s, the files actually posted for download to SPCR. They have high enough resolution for fine details of quiet fans at very low speed to be clearly discerned on a decent PC audio system or good headphones, yet are just 170kb file size for 15 second segments.

In case you have not already heard these files, this is the gist of the relevant portion of first SPCR review incorporating new sound files.

Finally, here is a view through a doorway of the adjoining TV/den that the SPCR lab is slowing annexing. It is far too much of a mess to show you more at this time. Suffice it to say that this room will be featured in many recordings. It is where most of the fan and hard drive noises will be recorded, as it has the benefit of a lower ambient noise floor (14 dBA after midnight), reduced reflections due to carpeting and heavy drapes, and larger dimensions (20′ x 10′ x 8′) for reduced wall proximity effects in both recordings and SPL measurements. 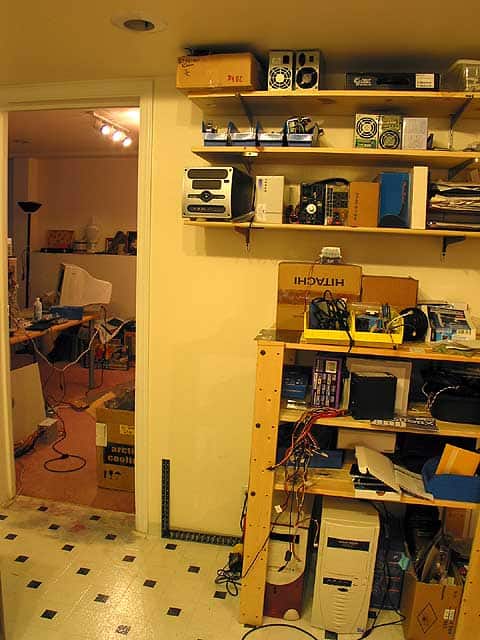 Just a peek at the recording lab through the adjoining door. The visible table is temporary.

Much thanks to all the contributors and sponsors who gave valuable time, expertise, equipment, money and other forms of support for SPCR’s lab resources. With such support and continued dedication, SPCR will keep growing our quiet niche of the PC world.