The last time we looked at a mainboard with support for two full bandwidth 16x PCI Express slots, the cost was high power consumption. The ASUS A8R32-MVP Deluxe, probably the last of the high end 939 boards now that AM2 is just about here, also features high PCIe bandwidth, but it uses ATI’s single chip solution — CrossFire Xpress 3200 — instead of nVidia’s nForce SLI x16 chipset. Does this board fare any better in the low power department? The small, passive heatsinks suggest that it may.

The ASUS A8R32-MVP Deluxe is more or less an ATI-based equivalent of the
super-high-end A8N32-SLI Deluxe. Both feature a stupendous amount of PCIe
bandwidth, integrated everything, and passive cooling for the chipset.

Despite much hype around the efficiency of its 8-phase power regulation, the
A8N32-SLI turned out to be a power-hungry motherboard. Passive
cooling or not, it required 20~40W more power than other socket 939 motherboards we
tested. The reason: An extra I/O chip designed specifically to provide extra
PCIe bandwidth.

After this experience, we were leery about
another high-bandwidth chipset board, but ATI’s CrossFire Xpress 3200 chipset
has gained a reputation for being a power miser, so we decided to give it a look. 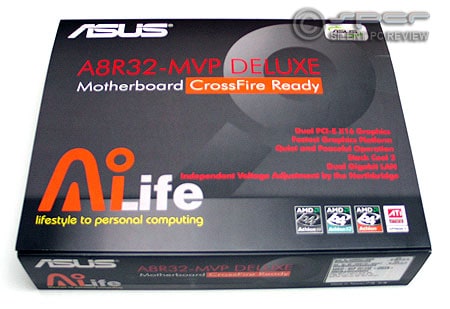 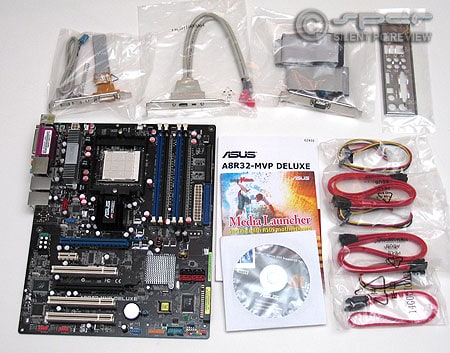 There are extra PCI brackets for two USB ports, two firewire ports (one 4-pin,
one 6-pin), a game port, and a serial port.

A quick glance at the cooling system gave us reason to hope. Gone are the massive
copper heatsinks and complex heatpipes from the A8N32-SLI. In their place are
two passive heatsinks that are decidedly smaller, suggesting lower heat disspation. 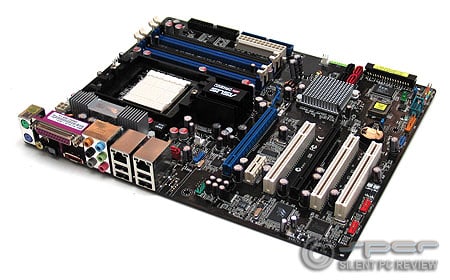 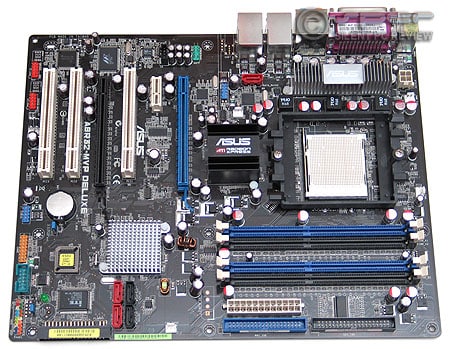 Only a high-end board could make a full-ATX board look this cluttered.
Click image for a higher resolution view.

A
complete list of features and specifications can be found on ASUS’ web site.
As can be expected of a high-end board, I/O connectors are plentiful. The board
is so feature-rich that it would take several pages to describe them all in
detail.

The big selling feature is the CrossFire Xpress 3200 chipset, which provides
a total of 40 PCI Express lanes — enough to let both 16x slots run at their
full bandwidth with a few more left over for peripherals. Only a CrossFire-based
setup with twin graphics cards is likely to even approach this amount of bandwidth,
and even then the advantage over a board with less bandwidth is quite small.

Two flavors of S/PDIF, eSATA and twin gigabit ethernet ports are highlights
on the back panel.

Considering how challenging it is to cool a dual graphics setup quietly,
few noise-conscious users are likely to want the A8R32-MVP for the extra PCI
Express lanes. Some other features will have to justify it’s top-of-the-line price. Some people will simply
opt to go with a cheaper board, but there are enough unusual features that it
may still be worth a look. For example:

The RD580 northbridge chip around which the CrossFire Xpress chipset
is built has a TDP of just 8W (according to The
Tech Report), so it shouldn’t take much to cool it effectively. 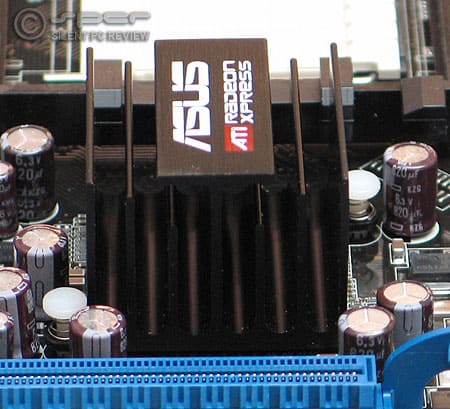 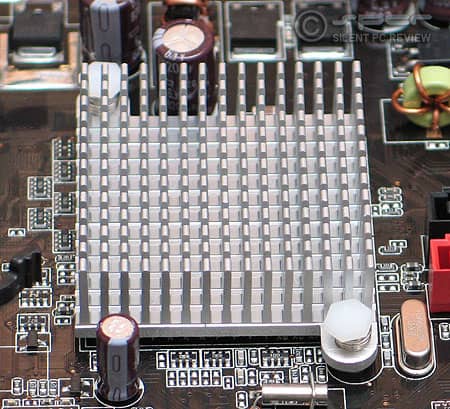 …and a tiny low profile heatsink for the southbridge.

ASUS has also slapped a heatsink on the VRMs that supply power to the CPU socket.
This is more an overclocking feature than a necessity, since it helps keep the
voltages stable under high temperatures and heavy loads. For a low-noise system
that uses low-heat components, it should help compensate
for the cooling that is lost around the CPU socket when a cross-blowing CPU
heatsink is used or when airflow is reduced to the minimum. 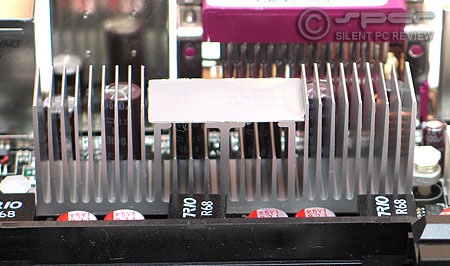 The VRMs get a heatsink of their very own. 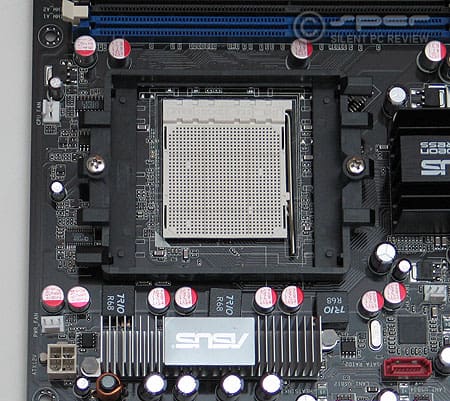 There’s some tall heatsinks around the CPU socket,
but they should be far enough away that they don’t cause much interference.

There is enough clearance around the CPU socket that most large heatsinks should
fit without a problem. The heatsinks for the northbridge and the VRMs are far
enough away that just about any heatsink should fit. Installation may be another
matter; the heatsinks may not interfere directly but they can still restrict access
around the bottom. 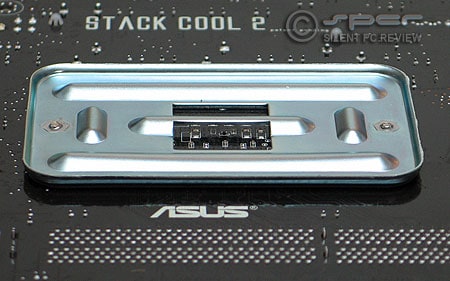 As befits its status as a top-of-the-line overclocker’s board,
the BIOS allows just about everything to be adjusted, including a number of
obscure voltages involving the northbridge. Alternately, there are a number
of automatic options that allow the board to adjust the voltages as it sees
necessary. Unfortunately, none but the CPU VCore can be adjusted downwards —
a pity, since the RD580 northbridge has gained a reputation for allowing heavy
overclocks at the stock voltage. With that amount of overhead, it would have
been nice to be able to adjust the northbridge voltages downwards to improve
power efficiency. 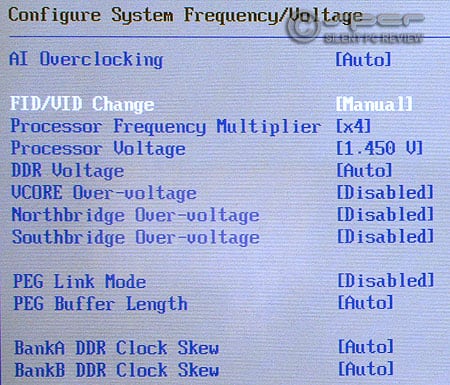 By contrast, the range of adjustment for the CPU VCore is mostly
downwards. The board itself is capable of supplying as little as 0.8V, but users
will probably encounter the AMD-enforced limit of 1.1V if they try and push
things too far. The maximum voltage depends on the processor, but it seems to
top out at ~0.1V above the stock VCore. A voltage offset mode that works with
Cool ‘n’ Quiet is also available which can boost the voltage by a further 0.2V.
It would have been nice to be able to select a negative offset, allowing the
processor to be undervolted while still allowing Cool ‘n’ Quiet to function. 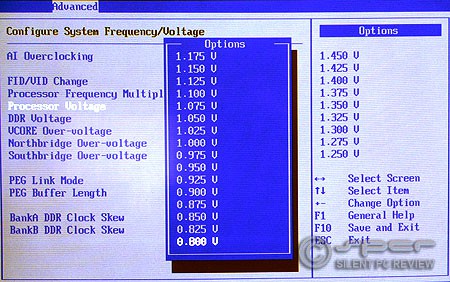 CPU Voltage can be adjusted to well under what AMD allows.

A voltage offset mode allows a limited amount of overvolting even with Cool
‘n’ Quiet enabled. 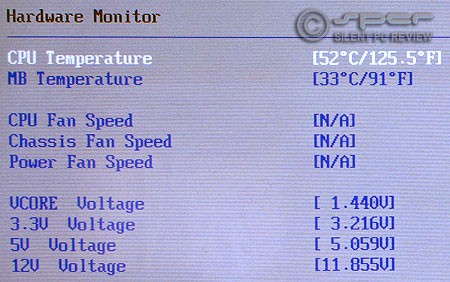 The usual range of thermal, voltage, and fan speed sensors.

Fan control is much improved over the A8N32-SLI, which only allowed the fan
controller to be enabled or disabled. Two channels of control are available:
One for the CPU and one for the Chassis. It is not clear exactly which fan headers
on the board (there are four) are controlled by which channel.

Both controllers allow a start temperature, a full speed temperature, and a
PWM temperature (a trigger point when the fan speed starts to rise) to be set.
The Chassis controller also allows an “off” threshold to be set to
turn the fans off completely below a certain point. All trigger points can be
set to any value between 0-100°C in 1°C increments.

The chassis fan controller was tested in a SilverStone TJ-07, with the
same configuration that we used in our review of that case. The stock trigger
points (shown below) were used to control one of the stock intake fans plugged
into the Chassis fan header.

The fan controller worked more or less as expected, running at a reasonable
minimum speed until the start temperature was reached, then increasing in speed
as the motherboard temperature rose. The trigger temperature was not reached
until the system was placed under heavy load, when it sped up smoothly after
several minutes and stayed steady once the new level had been reached.
Very little “warbling” was heard; the fan controller had enough hysteresis
built into it that it never appeared to be “hunting” for the correct
fan speed.

Although the CPU controller was not tested, it is probably less likely to be
so well behaved — as a general rule we avoid using thermally controlled
fans on the CPU because the temperature range is so dynamic that rapid changes
in fan speed occur quite frequently. 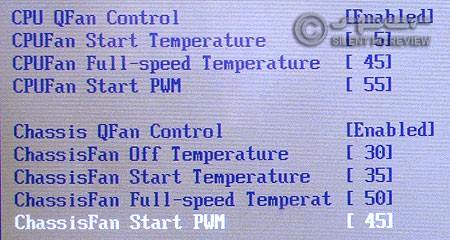 Extensive control over at least two of the fans.

As a general rule, motherboards do not consume a large amount of power, but
when they do, it’s often the voltage regulation module (VRM) that
is at fault. A high wattage processor requires
a voltage around +1.5V. But the PSU supplies with only +3.3V, +5V,
and +12V to the motherboard. Therefore, the motherboard must convert one of these voltages into
+1.5V for the processor. The +12V line is almost always used to supply Vcore.

But, the conversion from +12V to +1.5V is not perfect. There are inherent losses
in this process, losses in the form of
heat. The less efficient the conversion, the more heat is produced, and the
more power is drawn by the system overall. Motherboards that can perform the voltage
conversion more efficiently run cooler and require less power under load. Typical
VRM efficiency runs between 70-85%, althought it’s not linear, dropping at both high power and low lower levels.

Let’s put that in perspective. Assume that a processor draws 75 watts under
load (a conservative estimate for many of today’s processors). A motherboard VRM
that is 85% efficient will add >13 watts of additional heat to the system.
A 70% efficient motherboard will add double that amount!

Our review of the A8N32-SLI
Deluxe drew our attention to the fact that high end chipsets sometimes require
much more power than regular chipsets. In addition to the power lost to the
VRMs, the main I/O chips on the motherboard may also require a lot of power.

The ASUS A8R32-MVP Deluxe was tested against two other Socket 939 motherboards,
including an A8N32-SLI Deluxe. A common set of components was used so than any
differences in power consumption could be attributed to the motherboard alone.

The following components were used for the comparison: 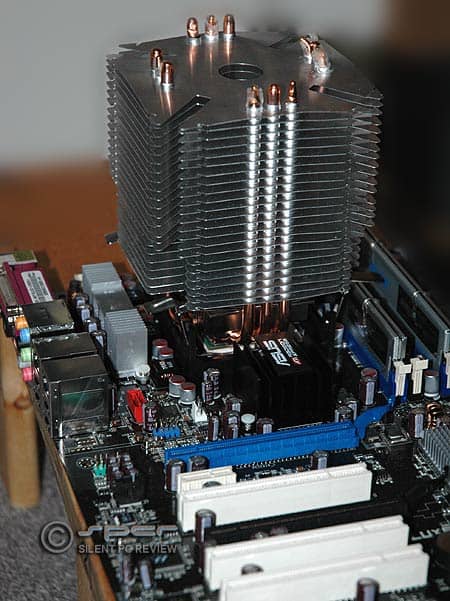 Yes, the Scythe Nija HS fits with room to spare.

The ASUS A8R32-MVP Deluxe was compared against an ASUS A8N32-SLI Deluxe and a DFI LanParty NF4 Ultra D. The motherboards were tested in three CPU states:

The results confirmed what we had already heard — the A8R32-MVP is a pretty
cool cucumber. Unsurprisingly, it beats the A8N32-SLI easily, but it also managed
to achieve a 5W improvement over the DFI board, which is based on a regular
nForce 4 chipset.

Surprisingly, the DFI board consumed slightly less power under load, which
suggests that the VRM efficiency in the ASUS board was not as linear as it could
be. It also suggests that the VRM could have been affected by increasing heat and may benefit from a bit more airflow than the open test bench setup allowed. Even so, the 3W difference is not really significant from a cooling or energy efficiency point
of view; its performance in idle is much more important.

With power efficiency in mind, we used the BIOS to disable as many unneeded
peripherals as possible on the A8R32-MVP in hopes of cutting the power consumption further.
Unfortunately, none of our tweaking had any effect at all on power;
no matter how much we disabled, all of the power figures stayed the same.

If you’re looking for a high-end 939 board that will run cool and
quiet, the ATI-based A8R32-MVP Deluxe is a pretty good way to go. At lower power levels, where
most systems spend most of their time, it consumed less power than either
of the nVidia nForce4 chipset boards that we looked at.

For most people, and silencers in particular, the high PCIe
bandwidth is a poor selling point because it is difficult to saturate a “regular”
chipset even with dual graphics cards. If CrossFire is not used, the extra
bandwidth is simply meaningless; no other application requires anything near
that much bandwidth.

The
eSATA port, the extensive BIOS options, good power efficiency, epecially at lower power levels, and passive cooling seem the most compelling features for a noise-conscious buyer. With socket AM2 just at the launching pad, the A8R32-MVP Deluxe may be just about the most advanced 939 board we’ll see from Asus.

The bottom line is that if you have an exceptional set of components already picked out or planned around a hot socket 939 processor, the A8R32-MVP Deluxe can probably go a long way towards
ensuring that the system stays stable, well cooled, and quiet.

Much thanks to ASUSTeK
for the opportunity
to review this motherboard.