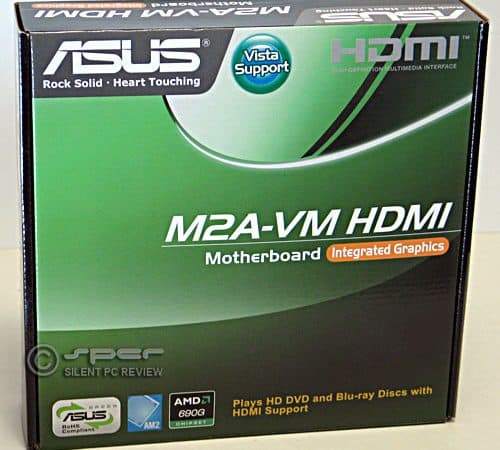 The last AMD 690G chipset motherboard we reviewed, the Albatron
KI690-AM2, was a great home theater PC candidate, boasting a ridiculous
number of features in a tiny package. However, its price, availability, and
mini ITX form factor placed it squarely into a niche market and out of reach
of many consumers.

Today we look at the Asus M2A-VM HDMI, a micro-ATX motherboard using the same chipset,
and sporting an almost identical feature-set as the KI690-AM2. Compared to mini
ITX, mATX motherboards are much more affordable, and the extra space allows
for better cooling and more expansion slots, making it a more versatile platform.
On paper the M2A-VM HDMI offers an incredible value — it is loaded with
features and retails for only $75US.

The board offers everything under the sun, including many features normally
found on premium boards: RAID, FireWire, and gigabit ethernet (connected via
the PCI-E bus). Asus also provides S/PDIF audio, and more video options than
you can sneeze at. Displays can be connected via HDCP-compliant HDMI, DVI, VGA,
component, S-Video, and even composite out. The 690G chipset also supports a
less-publicized feature known as SurroundView, which allows the Radeon X1250
graphics chip to not only provide dual simultaneous displays, but also to operate
in tandem with a dedicated video card to provide four displays at once.

Asus includes something they call a “Q-connector kit.” Instead of
painstakingly connecting each individual front panel and USB plug to the appropriate
pins on the board (which inevitably results in a lot squinting and cursing),
plug them instead into the Q-Connectors which act a convenient go-between. These are great little time savers, and we wish all motherboards would come with them.

Since Asus decided to include a parallel port, there simply wasn’t room for
extra video outputs on the back panel. To supplement this, they include an expansion
card with HDMI, S-Video/component, composite, and S/PDIF out. To be used, this
card must be installed in the PCI-E 16x slot, which may be a huge negative for
some users (most notably gamers).

The layout is fairly good. All the main connectors are located on the edges
of the board and nothing is glaringly out of place. The IDE port is placed on
its side which can help get a bulky IDE cable out of the way. There are three
fan headers: one 4-pin next to the AM2 socket for the CPU fan, one 3-pin in
a corner near the DIMM slots and one 3-pin at the very bottom next to the USB
headers. The CMOS jumper is sandwiched between the SATA ports and the front
panel header which makes it a bit difficult to access.

Clearance around the socket is a little tight with the northbridge heatsink
millimeters away on one side and a line of tall capacitors on another. The heatsink
covering the northbridge is surprisingly small and held on by a retention clip
hooked onto two hoops. Replacing this heatsink may be problematic as there are
no mounting holes. The heatsink on the southbridge chip, common on many Asus
boards, is very short with shallow grooves — not ideal for thermal dissipation.

The BIOS offers voltage control options which are usually absent on mATX boards.
The CPU can be undervolted all the way down to 0.800V and overvolted to 1.550V.
Memory and chipset voltages are capped at +0.30V over default. LDT Bus Frequency
(a.k.a. HT multiplier) is adjustable as is memory frequency, but memory timings
cannot be manipulated at all. The maximum amount of memory one can allocate
to the integrated video subsystem is 256MB. There is also a CPU Fan Speed Warning
setting which can be set as low as 800RPM, so the board will not chirp if a
moderately low speed fan is used to cool the processor; it can also be disengaged altogether.

The Hardware Monitor menu offers automatic fan control for the CPU fan in the
form of Q-Fan. There are no customizable options for it however — it can only
be turned on or off. CPU Fan Type can be set to either DC or PWM, indicating
that it will function with both 3-pin and 4-pin PWM fans.

When we loaded up SpeedFan,
it reported five fans even though there were only three headers. After some
investigation we found that Fan1 correlated to CPU_FAN, Fan2 to CHA_FAN, and
Fan4 to PWR_FAN. The Core temperature reported was quite low, so we decided
to ignore it. Temp1 rose 30°C when the CPU was put on load so we assumed
this reading was the CPU temperature.

The only working fan speed control setting we could find was Speed02, which
controlled the CPU fan. To enable this you must first enter the Advanced menu
and change PWM 2 mode to “Software controlled” (note: if you set this
to “SmartGuardian” it gives control to Q-fan). Once this is done,
you will have a full range of control (0 to 100%).

With the system idle, using an AMD heatpipe cooler, Q-fan had the fan spinning
at 1050RPM, which is approximately 45% in SpeedFan. When we ran CPUBurn, the
CPU temperature peaked at 50°C, but the fan speed did not increase. We had
to manually stop the fan and let it heat up before we noticed the fan start
to ramp up, which began at around 52°C. Beyond this point, the fan speed
increased quickly.

Our test procedure is designed to determine the overall system power consumption
at various states (measured using a Seasonic Power Angel), and to test the integrated
graphics’ proficiency at playing back high definition videos. Standard HD-DVD
and Blu Ray discs can be encoded in three different codecs by design: MPEG-2,
H.264/AVC and VC-1. MPEG-2 has been around for a number of years and is not
demanding on modern system resources. H.264 and VC-1 encoded videos on the other
hand, due to the amount of complexity in their compression schemes, are extremely
stressful and will not play smoothly (or at all) on slower PCs, especially with
antiquated video subsystems.

Since we did not have a HD-DVD or Blu Ray drive at our disposal, we instead
used a variety of H.264 and VC-1 video clips encoded for playback on the PC
for testing. The clips were played with Windows Media Player 11 and a CPU usage
graph was created by the Windows Task Manger for analysis to determine the approximate
mean and average CPU use. High CPU usage is indicative of poor video decoding
ability on the part of the integrated graphics subsystem. If CPU usage reached
extremely high levels and the video skipped or froze, we concluded the board
(in conjunction with the processor) failed to adequately decompress the clip.

WVC1 VC-1: Microsoft Flight Simulator X trailer is encoded in VC-1. It’s a compilation
of in-game action from a third person point of view. While the source
image quality is poor compared to the other videos in our test suite,
it was one of the few decent length clips we could procure encoded using
the Windows Media Video 9 Advanced Profile (aka WVC1) codec, a more demanding
implementation of VC-1. 1280×720 | 60fps | ~11.9mbps

Cool ‘n’ Quiet was enabled and Aero Glass was disabled during all the tests.

Overall power consumption was excellent on our test platform. Idle power was
only 35W — the energy efficient 80 Plus approved power supply and processor used
certainly had a hand in this, but both are widely available in the marketplace. The lowest stable underclock/undervolt we could
achieve with our BE-2400 processor was 1.0Ghz using 0.950V (approximately 0.10V
lower than using Cool ‘n’ Quiet). This resulted in only a 2W decrease at idle.
Both load tests came it at under 90W and power consumption during video playback
was nominal at 52~65W.

The Radeon X1250 integrated graphics chip powered through the video playback
section of our test effortlessly until the WVC1 encoded test clip.
Though the average CPU usage was only 64% during this test, CPU usage peaked
at about 85% on both cores during the most stressful portion of the video. Still,
playback was smooth, without visual hiccups.

Decreasing the amount of video memory (from the default 128MB) to 64MB resulted
in a small increase in CPU usage during playback of our WVC1 test clip. Using
32MB, it exhibited some stuttering and CPU usage peaked at 100% frequently.
At the opposite end of the spectrum, increasing the video memory to 256MB did
not result in any measurable improvement, so it would seem that, at least for
video playback, 128MB is the sweet spot.

It was obvious the moment we started to examine the M2A-VM HDMI that Asus was looking
to create an all-in-one solution. It looks like they succeeded. The number
of features and connectivity options are vast. High definition video playback
is good, and power consumption low. There are just enough adjustments available
in the BIOS to satisfy the majority of users.

Our only major complaint is that the HDMI module requires the use of the PCI-E
16x slot. While SurroundView allows you to use the integrated graphics
for extra displays, Asus’ implementation of the video outputs severely limits
the options of those who plan on using a dedicated graphics card if you also want HDMI. Very few video cards have HDMI output, and those that do have a price
premium attached. We’d happily trade the parallel port for a built-in HDMI port.

The rest of
our concerns can be considered nitpicks by some: the tiny southbridge heatsink could
use an upgrade and there are some minor BIOS restrictions, e.g. lack of memory
timing adjustments.

Overall, the Asus M2A-VM HDMI is a great choice for all kinds of applications. With such a low price tag, you won’t feel cheated even if you don’t
use all its functionality — but it’s nice to know the options are there
if the need ever arises.

Our thanks to ASUSTeK
for this motherboard sample.