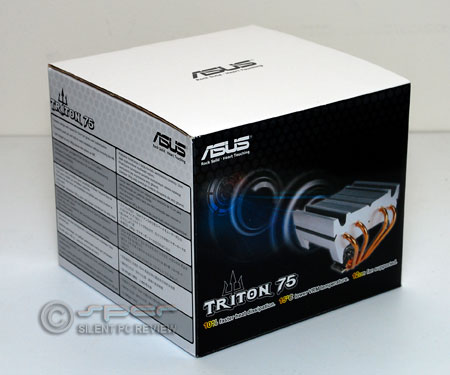 Asus makes not only motherboards and laptops, but also… just about every type of consumer IT product. They have a couple dozen heatsinks in their thermal solutions range; the Triton 75 is the first Asus heatsink to survive SPCR’s torture chamber.

Asus has become one of the biggest companies in the computer industry, a fact that gained some widspead exposure when it recently entered the Fortune 500 list for the first time. The company offers just about every type of computer product, from tiny handheld multifunction phone/GPS/computing devices to massive server boards. It’s not clear that Asus actually makes all the products that bears its brand; it’s likely many products are made for them by OEMs. No matter.

Not long ago, Asus began offering heatsinks for DIY enthusiasts. Their thermal solutions range is quite large, with over two dozen models listed on their web sites. The Triton 75 is the first Asus cooling product to be tested by SPCR.

Our Triton 75 sample came in a sturdy retail box with full color graphics notable for its lack of plastic, which is laudable, environmentally. The heatsink is billed as a fanless design and comes without a fan; this is a surprise for a mainstream brand with a reputation for overclocking friendliness in its motherboards.

No plastic at all used in the packaging. 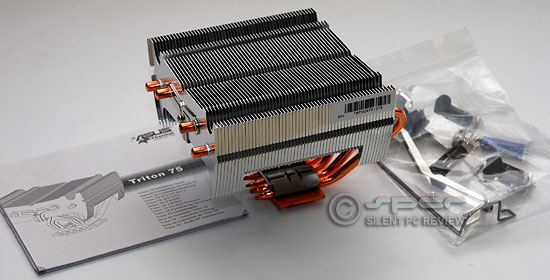 Just the quickest of glances shows that the Triton 75 is no innovative leap in electronic cooling design. It bears a striking resemblance to… any number of other designs that have been around for some time. (More on this later.) It’s quite a big heatsink, although there are so many huge models these days, that the Triton 75’s size doesn’t impress as it once might have.

The "manual" unfolds into a big sheet of well-illustrated instructions printed on both sides in 14 languages, which makes it obvious that Asus intends worldwide distribution. The drawing below from the instruction sheet shows all the parts.

The photos below show that the Triton 75 is a straightforward design that combines a minimalist base, copper heatpipes that loop in a C-profile into many thin, large aluminum fins. It strongly resembles various Thermalright designs (SI-128 and SI-120) which have been emulated by many others (Spire Fourier IV and Thermaltake Big Typhoon, to name a couple). You could say the Triton 75 is in good company, as most of those designs have been good performers. 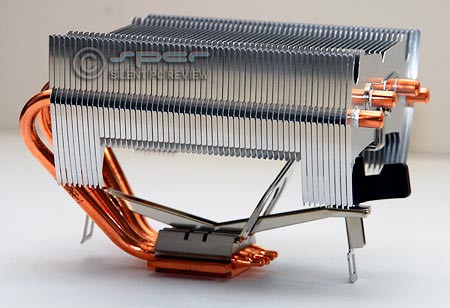 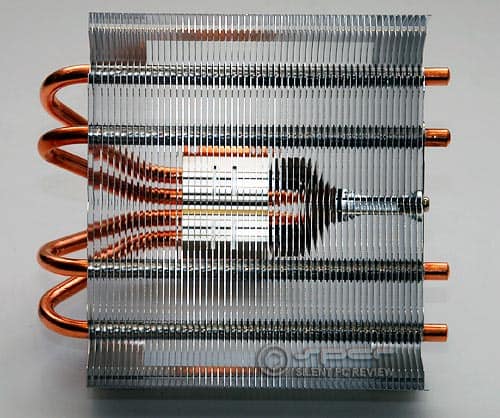 Fin spacing is about 2.5mm, which is good for effective cooling with low airflow. 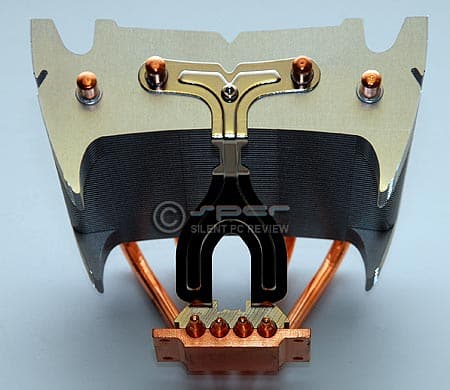 Note the even spacing of the four heatpipes and the odd "claw" at the bottom of each corner.

The image below shows the push-pins for the 775 socket installed on the base. There are two push-pins on each of two steel bars that attach via screws. It’s the metal bars that are threaded, and they are quite thin, so you need to take care not to overtighten, as the threads are probably easy to strip. 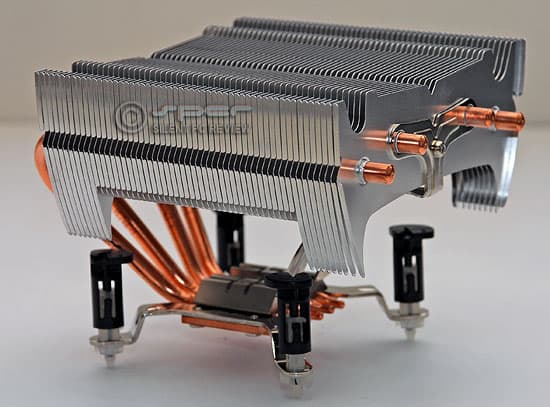 Set up for socket 775 of our heatsink test platform. Note claws again.

The push-to-lock pins employed for this heatsink were designed originally by Intel for use on their stock heatsink, whose dimensions remain inside the perimeter set by the pins. This means the pins are easily accessible from the top on almost any motherboard. Not so if the pins are used with heatsinks that have fins extending over the pins. The Asus Triton 75 is such a design, as all the photos have clearly shown. You have to reach under the fins to get to the pins. 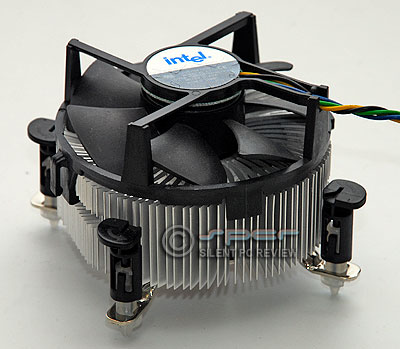 Locking pins were made originally for this heatsink design.

It was not until this phase of the testing that the fangs or claws mentioned on the previous page were noticed. What function could that little protrusion from the fins in each corner possibly serve? Certainly the effect on cooling with the extra bit of fin surface would be utterly trivial, so better thermal performance is not the goal. No, we can verify without a doubt that the sole intended function of those fangs or claws are to draw blood from the fingers or hand of the DIY enthusiast whose satisfaction will surely increase from doing battle with the Triton 75… especially the fangs closest to the heatpipes where they emerge from the base. The result of our bloody battle is shown below, with the heatsink securely mounted on the heatsink testing platform. 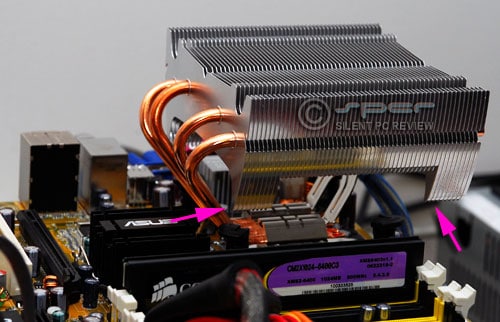 Clearance around the CPU socket is not an issue; the bulk of the heatsink sits
well above the motherboard. The overall size of the fins could be an issue, however, depending on the layout of your motherboard. On ours, the CPU socket is very close to the "top" edge of the board. With the Triton 75 mounted as shown, the fins hung over the the "top" edge by at least an inch. This would interfere with the power supply on that side in most cases.

There was no way we were going to do any load testing without a fan, so our reference fan was installed using the provided wire clips, which are easy to use.
Because they go over the thickness of a 25mm fan, whether the fan has closed or open corner flanges is not a concern. 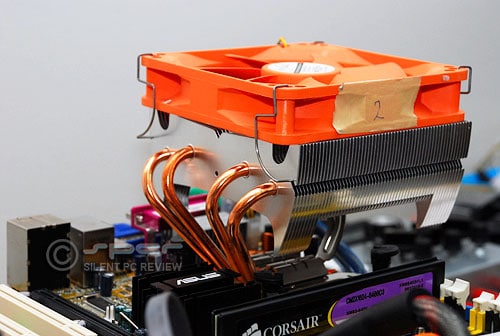 Testing was done according to our
unique heatsink testing methodology. A
quick summary of the components, tools, and procedures follows below.

Load testing was accomplished using CPUBurn to stress the processor, and the
graph function in SpeedFan was used to make sure that the load temperature was
stable for at least ten minutes. Every fan was tested at four voltages: 5V,
7V, 9V, and 12V, representing a full cross-section of the fan’s airflow and
noise performance. The fan speed control cable was not used, but its performance
is equivalent to the 9V level of our test.

The ambient conditions during testing were 18 dBA and 20°C.

The results were excellent. The performance was good enough to compare against some serious heatsinks that we’ve tested and highly recommended.

The Asus isn’t embarrased by any of these high performance, low-airflow, cooling champs. It substantially outperforms the SI-128, which it’s closest to in design. Especially at the very low airflow level of the reference fan at 7V, only the Ninja beats it by any significant margin.

For the record, the fan was removed while the CPU load program was still running. (We lied about never testing this cooler fanlessly.) The CPU temperature reached 88°C in 10 minutes, at which point the test was stopped. Our earlier comment, that this heatsink is not suitable for passive cooling, holds.

The reference fan was not re-recorded on the Asus Triton 75, because the recording above (made with the fan just blowing into free air) is very close to that of its sound while mounted on the Triton 75. If there is any audible difference, it would be at the 12V full speed level, where a touch more turbulence might be heard. But inside a case, this difference would not be audible.

If we awarded prizes for innovations in design, this Asus would not even get near the podium, but the proof of a heatsink is in the cooling. The Triton 75 is an excellent heatsink, offering great cooling performance with either low or high airflow fan settings. The Triton 75 can run within a few degrees of the coolest, baddest coolers around despite its low weight (whether it’s 398g or 350g, it’s lighter than most high performance CPU coolers). Leaving the choice of fan up to the user is a great idea that’s been long practised by Thermalright. It works well here, because the Triton 75 is equally at home in an overclocked extreme gaming rig or in a super quiet SPCR-ideal system, and the only difference would be the fan chosen (and the speed at which it’s run). The downward flow of the fan is a benefit to cooling of the VRM on most motherboards.

The "fangs" and the stock Intel locking pins for socket 775 mounting are annoying, but now that you’re warned, you can take care to avoid injury. With some motherboards (like the test platform board), the heatsink fins might extend too far over the edge of the board and interfere with the power supply on that side. Aside from those cautions, the only other downside to this cooler is that it’s not that widely distributed right now, at least not in the US and Canada.

The pricing of ~$35 in the US is quite good, especially if you already have a fan (or a collection of them) to go on the Triton 75. With so many motherboards now supporting some kind of fan speed controller, it should be easy to get a quiet operation with this cooler, and never worry again about overheating your CPU.

Much thanks to Asus
for the Triton 75 sample.