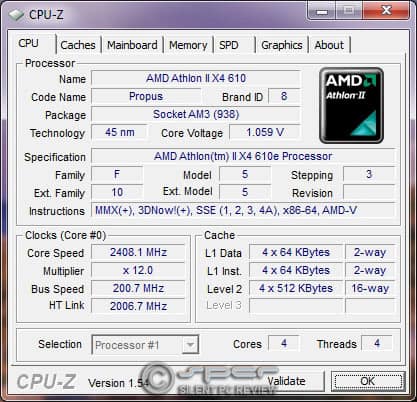 The Athlon II X4 610e and Phenom II X4 910e are quad core processors from AMD with very low thermal design power of 45W and 65W, respectively. Are they as energy efficient as they claim and are the higher price tags justified?

It has been 4 years since Intel took the reins from AMD with Core 2, claiming
the performance crown and never looking back. To this day, AMD remains dominated
by their Santa Clara rivals, particularly in the high-end processor market.
While the glory days of Athlon 64 are long over, recently it seems they have
returned to their roots, delivering tremendous value with their budget CPUs,
the kind of chips that made them the popular alternative to Intel in the first
place. It is simply amazing that today you can purchase a reasonably fast triple
and quad core AMD desktop processor for as little as US$70 and US$100 respectively.

AMD is also known for producing energy efficient chips, models that are easily
recognizable by a lower case ‘E’ at the end. These CPUs are typically expensive
compared to the standard models and do not offer a great performance to cost
ratio. They do run cooler though and are thus ideal in smaller cases where heat
and the noise associated with dissipating it are problematic. The two main question
are A. are they as energy efficient as AMD claims, and B. are they worth the
extra cost?

Enter the Athlon II X4 610e and the Phenom II X4 910e, a pair of quad core
chips with thermal design powers of 45W and 65W respectively. The downside is
they are clocked much slower than the competition. We will do our best to quantify
the performance and power difference.

Our first test procedure is designed to determine the overall system power
consumption at various states (measured using a Seasonic Power Angel). To stress
CPUs we use either Prime95 (large FFTs setting) or CPUBurn depending on which
produces higher system power consumption. For video playback we use a x264-encoded
1080p clip played with Media Player Classic – Home Cinema.

Secondly, we run a series of benchmarks, most of which are timed tests of real-world
applications. During the first 10~15 seconds, AC system power is measured at
the wall (and later converted to DC) and current/voltage measurements are taken
at the AUX12V connector to determine how much power is drawn by the CPU and
VRM circuitry alone.

Certain services and features like Superfetch and System Restore are disabled
to prevent them from affecting our results. Aero glass is left enabled if supported.
We also make note if energy saving features like Cool’n’Quiet and SpeedStep
do not function properly.

Before we jump into power consumption numbers, please note the operating voltages
of the processors tested today as sort of a disclaimer. Different samples of
the same processor often run at slightly different operating voltages which
can greatly affecting power consumption. With Cool’n’Quiet and C1E enabled,
most AMD chips typically run with a core voltage of about 1.0V when idle and
1.3V on load.

The X4 610e comes out on top in general system power consumption, but it only
beats the Core i5-661 by a small margin. The X4 910e ranks third, sandwiched
between the two Core i5s and uses about 30W less on load than its closest analog,
the X4 810. The majority of the rest of the lineup has remarkably similar power
consumption when idle and during video playback. On load, the X4 955 and 965
are extremely energy demanding, using 42~54W more than the Core i5-750.

When we measure power directly from the AUX12V connector, the X4 610e is the
thriftiest once again at idle and during video playback. On load, all the processors
except the X4 635 use less than their rated thermal design power, though if
you included the unknown amount of loss to the VRMs, it certainly does not exceed
95W.

No surprises here, the CPU load temperature is proportional to power consumption.
As such, the X4 610e and X4 910e run very cool compared to the 95W and 125W
AMD quads.

The i5-661 surprisingly well in PCMark05 despite being only a dual core processor
— its high clock speed definitely makes up for it. The X4 810 comes in
last which is a bit of anomaly, though individual runs of PCMark can vary by
as much as 200 points in our experience.

Our Photoshop test is a variation of Driver Heaven’s Photoshop Benchmark V3
using a smaller test image. A variety of filters are applied to the image and
the times elapsed are added up.

The more expensive X4 955/965 and Core i5s dominate this test, with the rest
of the field a step behind.

Our NOD32 test is a simple anti-virus scan of a folder with dozens of files
including archives. It’s one of the most common tasks performed on a PC.

The X4 610e completes this test with very low power consumption, but its lack
of cache and low clock speed makes its inferiority fairly noticeable, coming
in well behind the X4 810 and the rest of the pack.

Our WinRAR test consists of archiving a RAR file with a large group of files
of varying size.

WinRAR is a program that loves cache, so the Phenom II X4 910e and X4 810 jump
ahead of the Athlon IIs with higher clock speeds.

Our iTunes test is simply the encoding of a MP3 file into AAC.

After several split decisions between the X4 955/965 and i5-661/750, the Intel
chips finally best their AMD opponents outright.

Our TMPGEnc test consists of encoding an XVID-encoded AVI to VC-1.

Few surprises here except for the i5-661 using a ridiculous 27W less than the
i5-750 during encoding.

A similar test to TMPGEnc, only this time encoding to H.264.

This is the only test where the i5-661’s lack of 4 proper cores really hurts
its performance, falling behind the entire field except for the lowly X4 610e.

Our timed benchmark results multiplied by the average power consumption during
each test gives us an estimate of how much total power was used during testing.

As far as total system power is concerned, none of the AMD processors tested
today come close to the Core i5-661 and i5-750. The 610e and 910e are about
7 watt-hours behind, and the rest of the field are 11 watt-hours back.

On our test suite, the X4 630 and 635 gave us 75~80% performance of the i5-750
but at half the price, confirming that AMD can’t be beat when it comes to pure
value. The Core i5s were very fast, but also priced high, resulting in a much
poorer value score. The two energy efficient X4s are even worse, an undesirable
combination of lukewarm performance and high price.

Unfortunately, just as there is no such thing as a free lunch, there is no
ideal combination of both value (performance/dollar) and power consumption.
The best value processors, the X4 635 and 630 are among the most energy inefficient,
while their low power brothers, the X4 610e and X4 910 only offer minor power
savings coupled with poor value. The Intel chips fare better in this regard,
but keep in mind that we did not factor in motherboard cost. Intel boards typically
the cost 20~40% more than comparable AMD boards, driving down their value further.

The "E" processors total power consumption during our timed benchmarks
was only 10% better than the faster 95W and 125W AMD quad cores, and still a ways off from Intel’s Core i5s. They are slightly more energy efficient
when idle, but the difference is too small to make a real impact in the grand
scheme of things. In addition, the price premium attached to these processors
makes them rather poor values; equivalent or better performance can be found in the ~$100 Athlon II X4 635. From what we can
gather, the only real selling point of these CPUs is the lower operating temperature… but then again, most standard AMD processors undervolt fairly well.

Our thanks to AMD
and for Athlon/Phenom II X4 samples used in this review.