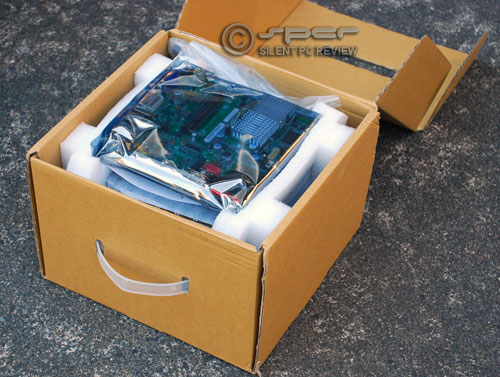 The first Atom-embedded mini-ITX board from Intel to feature the mobile 945GSE Express Chipset. You can hear the cheers from minimalist, green, and silent PC enthusiasts. Along with the lower power profile, the physical profile has also been dramatically reduced, allowing fanless operation in the 1.2-liter Morex T1610 case.

The D945GSEJT is the first Atom-embedded mini-ITX board from Intel to feature the mobile 945GSE Express Chipset. You can hear the cheers from minimalist, green, and silent PC enthusiasts who have griped about previous Intel Atom boards, equipped a little noisy fan to cool the Northbridge chip even though the CPU heatsink was fanless. Along with the lower power profile, the physical profile has also been dramatically reduced, making it possible to install the new board into all kinds of tight spaces.

Earlier Intel Atom boards were saddled with the desktop 945GC Express Chipset, which Intel’s own specifications show as having a TDP of 22W — far greater than the 2.5~4W TDP of the various single core Atoms or the 8W of the dual-core 330. It’s no surprise that the heatsink on the Northbridge chip on the earlier Intel Atom boards is equipped with a fan.

A sample of the new D945GSEJT came from Intel not in the familar small blue-colored box, but in a larger plain cardboard carton. It turned out to be a complete kit for a very small PC system,

Before we delve into the kit, let’s take a closer look at the new Intel D945GSEJT board.

The performance of the D945GSEJT is hardly a mystery. Any of the umpteen Atom netbook reviews is relevant to the peformance of this board. It has the same single-core Atom processor and the same GMA950 graphics as every Atom netbook. (If you really must have SPCR’s take on it, our Gateway EC1803h review compares its performance to that of the Atom netbook Asus 1005HA.) In a nutshell, it provides good-enough computing for web surfing, email, non-HD video playback, light image editing, and light "office" work.

The BIOS is typical Intel, with none of the options overclockers, power users, and silent optimizers take for granted. There is a fan control utility which can be turned on or off, with the slowest fan speed switchable between slow and off. Hmmm. About the only notable screen worth showing is the boot menu, which does allow the board to be booted from a wide variety of devices.

Several aspects of the D945GSEJT stand out:

The photos and specs on the previous page should have told you pretty much everything. Here are more details aboout the components that were part of the Intel kit.

The rest of the package was all part of the Morex 1610 Fanless mini-ITX case, which includes a 60W AC/DC adapter.

The Morex case is made of cast aluminum and finished with a glossy paint that seems resistant to wear and tear. Compared to something like the Asus Eee PC, the main weakness is the lack of any front panel ports. The board itself has headers for four USB ports, not used on the T1610 case (although Intel’s documentaion is careful to point out that they can power only one USB flash drive). There are only three USB ports on the back panel, and two of these will be used for the keyboard and mouse… although USB expansion hubs are a dime a dozen.

Thermal and power tests were run on the assembled system, mostly to confirm Intel’s power specs and establish that the case can adequately cool the board.

Both CPU and HDD temperature look perfectly safe in our relatively cool room. On the back on a monitor in summer, it may run 10°C hotter, but that’s still safe, and few users with normal applications will ever subject this system to the kind of extreme stress applied in our lab tests.

What’s interesting is that the power figures of this system are substantially lower than what we recorded for the Asus Eee Box B202, which uses the same CPU and chipset. This suggests higher efficiency in the power circuitry of the board, and perhaps of the AC/DC adapter. They are almost as low as the power figures recorded for the Asus 1005HA netbook. There’s almost no point comparing it to the Intel D945GCLF Atom board (with desktop chipset and an 80 Plus ATX12V PSU), which drew at least twice the power in all active operational states..

Aside from the power consumption, the compared systems/boards feature virtually identical performance, as the CPU and GPU are the same, with the amount of RAM being the single largest variant. The Intel GMA 950 isn’t good for anything 3D or higher than "easy" 720p video playback, at best, while the Atom doesn’t have the muscle to handle Flash video playback or Flash-heavy web sites well.

There’s little to discuss with regard to the system’s acoustics. Since there are no moving parts on the board or in the case, the only source of noise is the hard drive, so your choice there is obviously critical for noise. The Fujitsu supplied as part of the Intel D945GSEJT kit is a reasonably but not exceptionally quiet modern 2.5" drive. In the damped mounting of the Morex T1610 case, the drive measured about 22 dBA@1m or 20 dBA at the 0.6m distance of the ISO7779 defined seated user position. Seek noise pushed peaks about 2 dBA higher. There was some transmission of vibration into the desktop, but it was modest.

Quieter 2.5" drives are available, for 3-4 dBA lower noise. For a silent ultra small PC these days, a decent sold state drive is the preferred option. In any case, mounting the system on the back of a monitor easily reduces the perceived subjective noise, and drops the measured SPL by 3-4 dBA depending on the environment.

The Intel D945GSEJT Atom-embedded board is a product that will be welcome by SFF PC enthusiasts. Its reason for existence is the low power/thermal profile, and very slim physical profile made possible by the mobile 945G chipset. This board is likely the low power champ of x86 computing today.

It’s interesting to note that the D945GSEJT was preceded by products from Intel’s partners, such as the Asus Eee Box B202, which combined the Atom processor and the mobile 945G chipset a whole year before. There are a few complete ultra SFF PCs (of about 1-liter volume) other than the various Asus Eee Box models competing in the same space. Two examples are the Lenovo IdeaCentre Q100 and the Acer AspireRevo AR1600-U910H, both of which use an Atom 230 but paired with a non-Intel GPU/chipset — SiS 307DV for the Lenovo and the nVidia ION LE for the Acer. Given the pricing, a combo DIY Intel D945GSEJT kit such as that examined here faces stiff competition from these ready-mades. We know without a doubt that the ION GPU is far superior to the Intel 950, although its power demand is higher. Less is known about the SiS 307DV, but unlike the D945GSEJT/Morex T1610, the Lenovo Q100 has a much fuller array of ports. One final point is that the price of the complete systems includes at least Windows XP.

This comparison casts the Morex T1610 case in a relatively poor light. The absence of front panel ports or multi card reader finds it wanting against the ready-mades, at least for home/media PC use. The passive cooling and the high power efficiency of the included Seasonic AC adapter are nice, but from a system integrator or DIY point of view, passive cooling is easy to achieve with the D945GSEJT board, and the Seasonic is probably available separately at a modest price. Still, the T1610 is the smallest DIY case for mini-ITX available on the market today, and this counts for something. The asking price of $65 is not onerous, either.

Going back to the D945GSEJT, Intel’s promotional brochure says it is

ideal for entry-level or secondary home entertainment, small- to medium-sized businesses, call centers, and a host of innovative applications such as infotainment devices, kiosks, and home surveillance.

Given the widespread distribution of HD video, including HDTV, the qualifiers "entry level or secondary" for the first suggested function, entertainment, are very important. For those seeking good HD video playback with Atom, nVidia ION chipset appears to be the only viable option today. Much better yet is almost any discrete CPU mini-ITX board — let’s face it: Atom + GMA 950 is barely capable of 720p. For all the other functions, the new board is emininently suitable. In the Morex T1610, hung on the back of an inexpensive LCD monitor, it would be a fine choice for lots of office/business applications. In the right case with the right peripherals (such as a SATA or RAID expansion card), it could make a small, capacious, energy efficient and highly effective file/media server.

Our thanks to Intel
for the sample kit.