Be Quiet! Silent Base 800 ATX Tower

Be Quiet!’s first entry into the PC case market is a tall tower that like many others, attempts to combine elements of both quiet and performance chassis design into one.

Be Quiet!, the German outfit with the unusually commanding name, is known mostly for producing silence-oriented aftermarket desktop computer gear like case fans, CPU coolers, and power supplies — the last category being the base of their strong reputation, particularly in Germany and the EU. The Silent Base 800 represents their entry into a new category, the PC case. It’s a natural step for Be Quiet!.

The Silent Base 800 is a large, black ATX tower with three different options for front bezel trim colors: black, silver, and orange to match its logo. The top, bottom, and front of the case are made of plastic, as are the stands which help keep its hexagonal form from being accidentally tipped over. Like many cases geared toward silence, it presents a strong, mostly solid exterior that presumably contains noise better than more open models. It features acoustic damping sheets, rubber drive rails, and fans with padded corners, but no fan controller.

Like most models these days, the Silent Base 800 doesn’t pigeonhole itself. It’s a jack-of-all-trades that attempts to give all users everything in one shot — features, performance, and noise reduction, all rolled into one bulky package. Inside, you’ll also find a dedicated compartment for large radiators, numerous hidden fan placements (even on the sides), dust filters, and removable hard drive cages.

The Silent Base 800 is packed very well with large polystyrene inserts protecting the case’s corners. The stands are tucked away on the opposite side of one of these inserts to be installed after the fact. Included with the chassis is a multi-language user manual, all the necessary screws and standoffs, a set of orange rubber/silicon drive hard drive rails, and a few zip-ties and a single solitary adhesive hook for managing cables.

While the side panels are relatively thin and the top/bottom panels are hollow, the bones of the case are fairly well constructed. All the various panels fit well and are held securely, especially the sides. The side panels are attached with thumbscrews while plastic tabs hold the top compartment and front bezel firmly in place.

The assembly process is more or less the same as most tower cases. As our board is a microATX variant, some standoffs have to be added but for ATX models, it’s not needed. Other than that, the only notable aspect is using rubber rather than steel drive rails.

For our baseline noise tests, the system is left idle, the GPU fans are off completely by default, and the CPU fan is set to its minimum speed while the system fans are set to a variety of speeds. This gives us a good idea of what the stock fans sound like at different speeds with minimal interference from other sources.

When the system fans are disabled, the system measures just 14 dBA@1m which is very low for this configuration. With most cases, hard drive vibration usually pushes the noise level higher, but the Silent Base 800’s soft drive rail system handles this issue quite nicely, even without the stabilizing presence of the upper drive cage. Only faint tremors are passed onto the side panels.

The included fans have a sufficient speed range to satisfy most users, whether they’re biased more towards silence or performance. The fans stay relatively quiet up to about 60% speed, which generates a noise level of 20~21 dBA@1m, while full speed drives that mark up to 29 dBA@1m, nearly double the subjective loudness. Interestingly, the smaller 120 mm rear fan has a much higher nominal speed than the 140 mm front fans, an odd choice that may be an attempt to make up for the intake/exhaust airflow imbalance.

The quality of the noise emitted by the stock fans neither impresses or disappoints. Both fan models have similar acoustics consisting of a light but dry underlying hum, and smooth turbulent noise up to about 70% speed for the front fans and 80% for the rear fan. Beyond these levels, they take on a rougher character and begin to drone. With the CPU and GPU fans going, these issues should be at least partially masked.

At 40% system fan speed, the system measures 19~20 dBA@1m when sitting idle with cool internal temperatures across the board. On load, in order to achieve our target GPU temperature, GPU fan speeds of 1230~1400 RPM (44~48%) are required depending on how fast the system fans are running. The sweet spot seems to be 70% which produces a quieter result than both the 60% and 80% levels, while generating similar thermal performance. 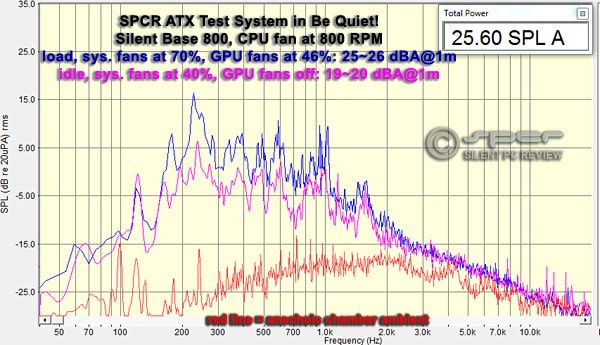 The GPU fans add a good amount of low frequency noise to the mix but combined with the CPU, they somewhat soften the harsher qualities of the system fans. However, overall, the machine sounds more or less the same, just louder than during our baseline tests.

Earlier I mentioned the fan speed discrepancy between the rear and front fans but this doesn’t have a major impact on overall performance. With the front fans going at 80% speed and the rear fan slowed to 60% to attain a better fan speed balance, the result is almost identical to all the fans running at 70%. The front dust filter, which blocks a sizable portion of the intake vents, also isn’t a game-breaker as its removal produces a very slight cooling effect on the CPU and SSHD. Even if it did make a big difference, the door covering the fans latches onto the filter, so if you pull the filter out, you might as well toss the door out as well.

Leaving the filter on and opening the fan door causes a significant improvement thanks to a huge influx of cool air. The GPU fans can be slowed to the minimum 40% speed while the CPU, MB, and SSHD temperatures all drop noticeably. This is the only change that results in a positive noise outcome, with the machine running quieter by 1~2 dB.

When compared to recently tested cases, the Silent Base 800’s best result (without major modification) is a bit of a let down. It runs cooler than the CM Silencio 652S and NZXT H440, but also 1~2 dB louder. My inability to coax the noise level down further suggests there is some X-factor at work, whether it be the fans being inefficient, or the bottom and top compartments amplifying/echoing the noise being produced inside.

The Be Quiet! Silent Base 800 hits most of check-boxes I look for in a >US$100 case. While not made of the thickest material, they somehow managed to make it feel better built than it is. The side panels are especially worthy of praise, fitting so well I never had to fiddle with the alignment when getting them on, which is rare. The interior is strong with all portions of the internal frame solidly connected to one another and rolled edges to keep nicks and scratches to a minimum. The drive cages allow a decent amount of air to pass through the unused bays, and while they on the thin side, they fit well and are remarkably stable as they are secured on three different sides. This, combined with the rubber drive rails, does a better job than most at limiting hard drive vibration.

The other features are pretty much standard for midrange cases such as the noise isolating foam lining much of the chassis, too much in fact as it’s of little use on the right side and behind the doors. The included dust filters that cover the bottom and front fan positions are of decent quality. Compatibility is fairly good as the drive cages are removable allowing for long graphics cards, and fan placements are available at the bottom, side, and top of the case. Radiators up to 280 mm size can be accommodated on the ceiling, but Be Quiet! takes the additional step of providing a separate compartment to ensure there’s a bit more clearance above the top edge of the motherboard. Cable management behind the motherboard tray is lacking from an organizational standpoint, but there’s enough space that it doesn’t really matter.

The Silent Base 800’s product page states that the “look of the case is based upon its intended function and purpose” but I found this counter to my findings. The hollow sections occupying the top and bottom of the case are prime examples. To maintain a more solid appearance, the ventilation of these compartments is restricted to a limited area at the rear of the chassis. The fan position on the case floor is further impeded by a dust filter and has to fight the PSU for airflow, while a radiator at the top would occupy an inch of space, making it difficult for its fans to direct hot exhaust air out the back. The top section is actually useful, though, while the bottom only provides physical symmetry, and along with the stands, makes the case much taller than it needs to be. The side panel fan placement on the right side is also pointless, and the covers hiding both side fan mounts use clips that can interfere with the innards of the case.

When originally unpacked and examined the Silent Base 800, I was impressed by how well put together it was despite some odd design elements. This first impression made me want the case to succeed but it ultimately fell short of expectations. Real-world testing produced disappointing results and a closer look at its various flaws revealed they were more problematic than I initially realized. The foundation of the case is great but it’s obscured, seemingly led astray by a misguided desire for a solid, symmetrical, hexagonal exterior. Sometimes it’s acceptable to lose some functionality to achieve a certain aesthetic but here the price seems too high.

Our thanks to Be Quiet!
for the Silent Base 800 case sample.