The GTX 1080 Ti rocked the gaming world, and that was just the reference card.

Then came a flurry of bespoke third-party cards with custom cooling and factory overclocks, giving even more of an edge on performance.

Which one should you choose? Fortunately we’ve sorted through them all and listed the top five, as well as a budget option for those looking for great value.

Read on to find out which one is right for you.

What Makes the 1080 TI Graphics Card Stand Out?

The GTX 1080 Ti remains one of the best high-end options for enthusiast gamers.

It was revolutionary at the time of its release, since it was the first to deliver 60fps gameplay at 1440p resolution.

It’s still one of the most powerful GPUs in existence, packed with 3,584 CUDA cores and a memory clock of 5,505MHz.

It’s future-proof too, with a massive 11 GB of GDDR5X memory.

Frankly it’s wasted on 1080p gaming, since your CPU will actually bottleneck performance.

However, if you have deep enough pockets and are after excellent 1440p or 4k gaming, you can’t go wrong with the 1080 Ti. 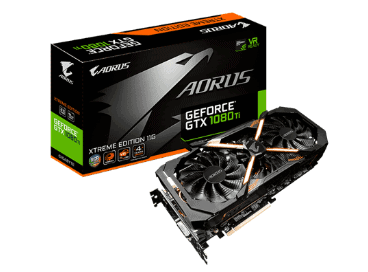 This thick three-slot 11GB model has a massive processor and is the most powerful choice.

This card means business and is aimed at people with large Ultra HD gaming screens, where it has no problem delivering 80-100fps.

It’s also perfect for VR fans, with seven connectors (so plenty of ports for monitors) and a front-facing HDMI port to plug in your Oculus Rift or HTC Vive easily.

There’s three 100mm fans, and a copper base plate and backplate. The backplate actually helps draw heat from the rear of the GPU.

The max temperature is 70°C, which isn’t the best in the range. However, it is very silent, with noise levels of just 37/38dBA under load, which is extremely impressible.

The design is a bit atypical, fairly porous matte back with silver and orange accents. It makes a nice change from the typical blacks or black and red. The RGB is particularly customizable, with a ton of animations.

It sucks up to 280W, and power delivery is via an 8-pin power connector with enormous 12+2 power phases.

What’s more, performance definitely won’t be limited by memory in any way, as it comes with a staggering 11GB. If you want a future-proof card, this is it.

This is one expensive card, but for many enthusiast gamers, it’s worth the money. 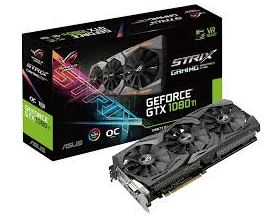 This is one of the best of the 1080 Ti cards, another absolute powerhouse that’s wasted on those who don’t have an Ultra HD monitor.

The HDMI 2.0b connector means you can hook it up to the latest big screen TVs, and it can even handle 5k.

The base clock is 1569MHz, with a boost of 1683MHz. There’s no game it can’t play decently at the highest settings.

It runs cool and silent, with three fans that can spin up to 3500RPM. However, they won’t spin up to 55°C, and max temps only reach 67°C. Even at full load, it only reaches 39dBA, which is silent, and there’s no audible coil outside the chassis either. Incredible.

This is where it really stands out to the reference card, which is pretty noisy and runs pretty hot too.

The look is plain matte black, however the fans and logo come packed with cool RGB lighting effects controllable by Aura Sync software.

The backplate is nickel-plated and also matte black, with plenty of ventilation slots. There’s 40% more heat dissipation on the heatsink than Asus’s previous 1080 model.

It uses up to 285W under full load, with a beefy 10+2 phase power supply and powered by two 8-pin power connectors for extra overclocking capability.

You’re looking at around a 10% improvement or more in performance compared to the reference card if you do some tweaks. 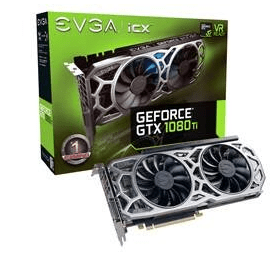 This is another beast edition of the Ti, but with unique touches.

It’s got a slightly higher out-of-the-box boost clock speed of 1670 MHz, overclocks like a champ, and it still packs that hefty 11GB of memory.

They went adventurous with the design; you’ll probably either love it or hate it. Instead of the traditional solid matte black, it’s actually a porous metallic affair, showing the heatsink underneath.

And what a heatsink it is; EVGA have introduced something truly unique here called  iCX. GPUs are normally monitored by just one temperature sensor on the processor; this one has nine all over it, including each of the fans, the rear, the power controllers, and the memory.

These control the speed of the fans independently, of which there’s only two. For example, if only the memory is heating up, only the memory fan will speed up. Pretty revolutionary stuff, and very effective.

Like the Asus, temperatures only reach a cool 67°C.

RGB takes a practical turn here, with three lights above the logo indicating how hot the GPU, memory, and PWMs are. You can change the colors, though.

The max power draw is 303W, so slightly less efficient than the Asus. It’s got 8-pin and 6-pin power connectors, and a 7+2 phase power supply.

Despite the innovative cooling and bigger clock speeds, gaming benchmarks don’t quite seem to match the Asus. For example, Hitman reaches 95fps on 1440p, much lower than 134fps on the Asus. Ashes of the Singularity reaches 95.1fps on 1440p, and Rise of The Tomb Raider runs at 83.91fps. 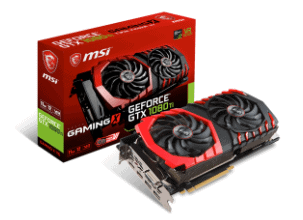 This is a slightly cheaper typical model from MSI. It’s not as powerful but the build is quality, with an emphasis on silence.

The looks are the traditional black and red and it comes with a solid, well-ventilated backplate.

The red RGB is subtle, contrasting well with the black and the red accents, with a few animations available.

The TwinFrozr VI cooler has been improved, with two new Torx fans with steeper curved blades to improve airflow. They will stay passive up to an impressive 60°C, beating even the above two models.

The copper base plate is nickel-plated, with 8mm heat pipes.

It’s overclocked to a 1,657MHz boost and a 1,544 base, and overclocking isn’t quite as strong as the above models.

It’s powered by two 8-pin power connectors with an 8+2 power phase for a bit more room for overclocking.

At 51mm thick, it’s not the slimmest, and may even take up three slots, though it’s listed as dual-slot. The 29cm length should make it easy to fit into most cases, though.

Connectors are standard with two DisplayPorts, two HDMIs and a DVI. Two HDMIs makes it ideal for VR.

It uses just 270W under full load, and only 69°C max, meaning no throttling.

As you’d expect it wipes the floor with competitors in terms of noise, reaching just 38dBA at load. So you can expect pure silence whilst gaming with this. 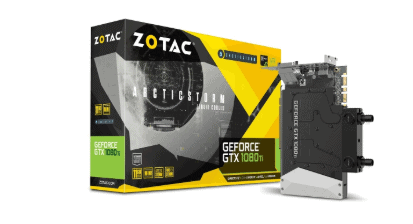 For compact PC builds, this little Zotac is around 5cm shorter than the other models on our list at just 20cm. However, it doesn’t compromise on performance.

It’s liquid-cooled, which means amazing cooling and silent operation; just hook it up to your liquid cooling loop. It reaches just 41°C max.

If liquid-cooling isn’t for you, there’s also a much cheaper non-AIO version (the Zotac GeForce 1080 Ti Mini), but this does tend to run hotter than most and the fans are noisier.

The looks are very slick, with subtle RGB lighting and a large Zotac logo. 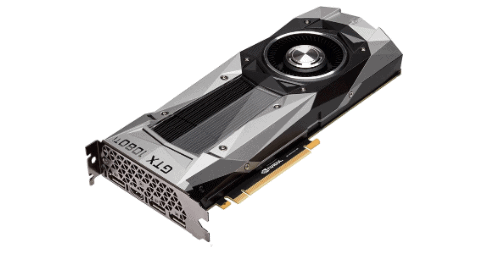 If your heart is set on the 1080 Ti but you can’t afford to splurge, Nvidia’s no-frills Founders Edition will do just fine.

You’ll still be getting the basic powerhouse introduced with the first 1080 Ti.

It’s not clocked as high obviously and overclocking is more limited, with a 1480MHz base clock and a 1582MHz boost.

However, overall you’re only sacrificing around 10% on performance compared to the top modified cards, and gameplay is still excellent.

It does run a little hotter, reaching around 75°C at full load. This is due to the backplate not being vented, trapping a lot of heat.

Noise levels are also slightly higher at 41/42dBA, which means you’ll be able to hear it during intensive gameplay, although there’s no coil noise.