Looking for a 5700 XT, but not sure which one to get? We take a look at them all, from the Sapphire Nitro+ producing 2080 Super-like speeds, to a budget model that still makes gains over the reference card.

And the 5700 XT is a card of firsts. It was the first to get to 7nm, the first to support PCle 4.0, and the first to use AMD’s new ‘RDNA’ architecture over the previous ‘GCN’.

This combo of 7nm and RDNA architecture means much better performance and efficiency.

It means redesigned Compute Units, a new cache structure with a 25% IPC boost, and  50% efficiency boost.

In terms of gaming, 1080p gaming is easy-peasy for this card, and it can also comfortably achieve 60fps at 1440p on the highest settings. With 4k, it can still reach 60fps on medium settings on some games.

Its only weakness is the lack of support for real-time ray tracing, which the GeForce RTX 20-series obviously has.

If you want ray-tracing and smooth 4k gameplay, you’ll need to take the leap to the 2080 Super.

But if you’re willing to make a few compromises, the 5700 XT is an excellent, and much more affordable, option. 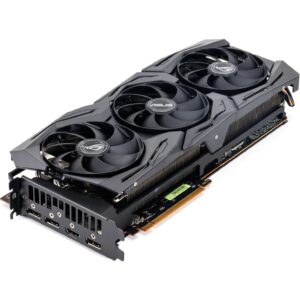 The Strix cards always look fantastic. It’s got the same premium Strix looks with well-placed RGB accents and an Aura RGB header on the rear, which can all be switched off at the press of a button.

Like all other ROG cards, there’s massive overclocks alongside great cooling, but at a hefty price tag.

The factory overclock is substantially higher than the reference card at 1905MHz, and there’s also great headroom for even more manual overclocking. It can be increased over 100MHz using the Asus Tweak II software, which does make a difference to gaming performance, up to 10fps.

The cooling is top-notch with three Axial-Tech cooling fans, a MaxContact cooler and hefty double-heatsink. Graphite thermal pads are used over inferior paste for heat transfer. There’s also an extra fan at the rear and a premium vented backplate.

Two BIOS modes really make a difference to performance. Performance mode focuses on cooling, reducing temperatures up to 10C. In Silent mode, you won’t hear the fans with a max 34dBA (in Performance mode, they go up to a normal 40dBA). The fans also don’t spin below 60C.

There’s a nice three DisplayPorts and one HDMI.

Maximum temperature goes up to 76C at load in Silent Mode, but only 68C in Performance Mode, so you can choose which to prioritize.

The biggest downside is the price. This is a high-end card for enthusiasts with deep pockets who want top performance.

The size will also be off-putting to some, essentially taking up three slots (technically 2.7) and on top of that its length might not fit in most cases.

Power consumption is also high at 249W at load, fed by two 8-pin connectors. You’ll need at least 550W on your PSU. 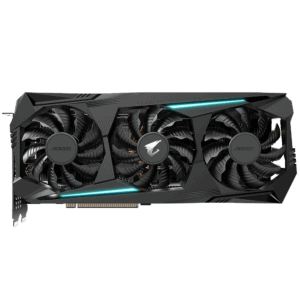 Another model with big clock speeds, dual-BIOS and a focus on cooling, this Aorus is Gigabyte’s flagship model, with similar prices to the Asus.

The neutral black plastic shroud has a couple of subtle RGB accents around the fans, and two more on the top of the card with the logo and also a ‘no fan’ indicator, to tell you when the fans aren’t spinning.

There’s a huge jump in clock speeds. It’s got a 1,905MHz factory game overclock, up from 1,605 MHz on the reference card.

It’s another beast of a card though, measuring 290 x 123 x 58mm. This length means it might not fit in a lot of cases again.

The Windforce 3 cooling system is comprised of three 82mm fans which spin in different directions to reduce turbulence. The center fan spins clockwise, whilst the outer fans spin counter-clockwise. The heatsink includes six copper heatpipes with two fin arrays, and thermal pads aid in cooling behind the GPU core and VRM.

Noise levels reached 40dBA in Performance mode, but only 34dBA in Silent mode. This is identical to the Asus.

However, it actually managed to keep a lot cooler than the Asus. Temperatures were 73C at load in Performance mode, but a very cool 61C in Silent mode.

As a bonus, there’s an unusual six display outputs. As well as the usual three DisplayPorts and one HDMI 2.0b, it includes two more HDMIs (1.4b).

The Aorus Engine software is also easy to use but not the most comprehensive. 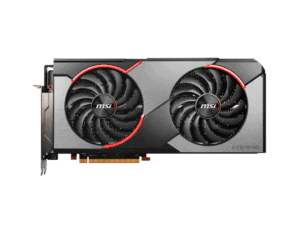 This MSI model differs from the typical all-black PCB with a black and gunmetal gray, red accents around the fans, and an attractive brushed metal backplate. RGB is nice and subtle.

It’s refreshing, as well as a lot more premium-looking despite the cheaper price.

The gaming clock speed isn’t the highest on our list at 1870 MHz. Despite this, it beats many models, including the Sapphire Pulse OC, MSI Evoke OC and the Gaming X, in all tests.

Unlike the above two models, this is only dual-fan, with two 90mm Torx v3.0 fans. Unsurprisingly, these two MSI fans are whisper-quiet, not spinning below 60C.

MSI have finely honed its coolers with Zero Frozr technology. The Wave-Curved 2 heatsink maximises fast airflow across the heatsink and through the fins. Thermal padding covers the memory and PWMs, and an aluminium plate aims to keep the power delivery nice and cool.

It also uses cubed Spaced Armour to increase the gap between the backplate and PCB to 3.3mm, up from 1mm on the reference cards.

All these features are obviously effective, creating a maximum temperature of just 65C.

Power is via two 8-pin connectors. Power Allocation Technology is another new feature from MSU, preventing overloading by drawing more power from the power connectors rather than the PCle slots. The TDP is ust 254W.

Here’s another card that’s 290mm in length, so again, check it can fit your build first.

Another downside is, unlike previous models, there’s no dual-BIOS to play with. 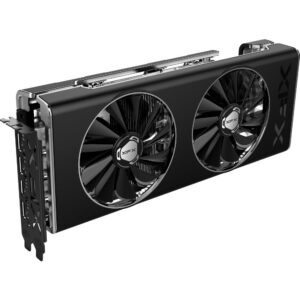 First up, wow, what a looker this card is. Completely one-of-a-kind, it’s Double Dissipation design exudes class, with matte black and chrome accents and a fantastic chrome grille on the end. A metal backplate with the XFX logo keeps things rigid.

There’s absolutely no RGB on this, which wouldn’t really fit with the classic look.

It’s another relative giant, 292mm in length and covering 2.5 slots.

There’s the typical three DisplayPorts and one HDMI, and it does have dual-BIOS.

It comes with a massive factory overclock. The base clock is 1,730MHz, the game clock is 1,870MHz, and the boost is 1,980MHz. However, in practice it goes up close to the boost speed in most games, even reaching 2,000MHz at times.

This elite performance requires a lot of oomph, and it draws a whopping 320W max, way more than any other model on this list.

However, the cooler is extremely effective. A Ghost Thermal 2.0 cooler includes two large 100mmm fans, a thick heat sink, and four 6mm composite heat pipes. This keeps it running at an ice-cold 62C.

The fans don’t spin unless under load so they’re silent during low activity. However, they definitely aren’t the quietest when pushed. 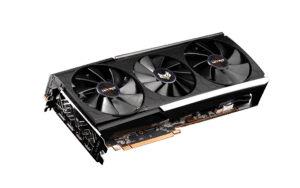 However, the real magic comes with its software. It’s extremely clever ‘Trixx Boost’ software can also give huge fps gains with miniscule sacrifices in resolution.

However, using Trixx Boost software bumps Far Cry New Dawn up to 96fps at 1440p and 73fps at 4k, with no visible difference to resolution. Amazing.

With this, the Sapphire blows all competition out of the water and is able to achieve 2080 Super/2080 Ti-like performance, making it a bit of a steal.

Despite this maximum power draw is actually less than the XFX at 364W.

The Tri-X cooler consists of three fans and a huge full-length heatsink that even reaches past the shroud and backplate, making it an enormous 304mm in length.

The fans have tunnel-curved blades, and each fan rotating in a different direction to its neighbor to reduce turbulence. The fans both stay quiet under load and keep things cool at a max of 66C. By comparison, the XFX is a bit cooler but a lot louder, with their fans spinning up to 2,300RPM against the Sappire’s 1,800RPM.

Although the looks can’t compete with the XFX, it’s still attractive enough, with a black, silver and blue design and a honeycomb imprint. There’s a nice metal backplate and it comes with a ton of RGB on the edge and logo on the back, as well as a header for syncing to your motherboard.

As a nice touch, you can also easily upgrade the fans to ARGB with ‘Nitro Glow’.

Sapphire brings the big guns with a 7+1+2-phase digital power delivery and not two, but three BIOS profiles. 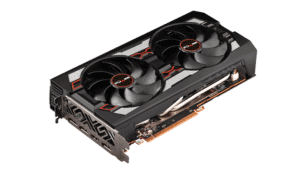 This is a nice budget model from a reliable brand that makes some nice gains on the reference card without breaking the bank.

The looks are either a love-or-hate scenario, daring to be different from the usual all-black shroud with interesting perforated gray and red stripes. You still get an aluminium backplate to keep things solid.

The top side also features an RGB Sapphire logo and part of it is cut away to give a nice view of the silver heat pipes.

At 254mm it’s a bit more conservative than the other cards on this list, but it’s still pretty thick at 48mm.

The Dual-X cooling solution works much better than the reference card, with two 92mm fans with airfoil section blades, heatsinks for the memory and PSU cooler, and horizontal fins that push heat out the back-end.

The reference card reaches over 100°C under load. The Sapphire Pulse manages to get things down to just 68C, which is incredible for a budget card.

The blower-style fans on the reference card are also high-spinning and loud, whereas the Pulse fans keep things nice and quiet.

You still get three DisplayPorts and one HDMI, and even dual-BIOS.