Have you landed a great Ryzen processor, and now you need the right motherboard?

Well, AM4 is your best bet. It’s the most popular socket, supports a whole range of chipsets, and best of all, it’s future-proof: AMD has promised long-term support.

Check out our guide to the best AM4 motherboards for every budget and purpose whether you’re a gamer, video editor or streamer.

What Makes a Good AM4 Motherboard?

Motherboards are all about compatibility. Motherboards have different chipsets, but AMD’s are way more forgiving than Intels.

You also want to check it supports your RAM and it’s got enough PCIe slots, memory slots and ports, taking into account any extras you might want to add later.

Finally, think about casing; make sure it can actually fit into your case.

There’s 3 main sizes (or to use the more technical term, form factors) of motherboard: ATX is the largest and most ‘standard’ size, Micro-ATX is smaller and Mini-ITX is the smallest. (I know, you would think Micro would be the smallest but it isn’t).

Generally, the bigger the board, the better; it will have more features, and more connectors, heatsinks, card expansion slots, and RAM slots.

Micro and Mini have to inevitably make some pretty large sacrifices, and you’re never going to get as good value as an ATX board, so we recommend ATX if you can swing it.

How We Choose AM4 Motherboards

Although specs are important, real-life testing is even better. For example, gaming benchmarks, overclocking testing, and efficiency all paint a much better picture of performance.

The price has to be reasonable, but even more importantly, can you get more for your money elsewhere? 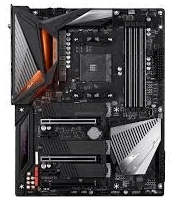 If you’re looking to use a AMD Ryzen 3rd or 2nd Generation chip such as the quality Ryzen 7 2700 or 3700X, this is the best motherboard sporting the latest AMD X570 chipset.

This model holds its own against more expensive X570 boards, the only major difference between losing 2.5G network capabilities and 2 less SATA ports.

It’s a very well-rounded board with 3 M.2 slots, premium audio, wifi, a quiet fan and plenty of USB slots.

The voltage regulator heatsinks are a bit revolutionary, with a direct-touch heatpipe and a fin design that increases heat dissipation area by 300%.

There are 3 full-length PCIe 4.0 slots, the top 2 of which are reinforced, supporting two-way SLI and up to three-way CrossFire multi-graphics card configuration.

It overclocks well with no issues and no overheating, similar to more expensive X570 boards.

RGB lighting is more subtle than some, on the left voltage regulator heatsink and audio section, though it does come with a few headers if you want to add more.

Best Bang for the Buck AM4 Motherboard 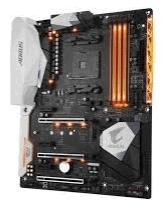 If you’re looking for a well-rounded budget board that’s not just for gaming, you can’t go wrong with the Gigabyte Aorus AX370-Gaming 5.

It’s got a very well thought-out layout, and beats its ASRock competitor, the X370 Taichi, in features.

Memory is still a standard DDR4 over 4 RAM slots supporting up to 64 GB memory.

It actually offers 2 Realtek ALC1220 audio codecs rather than the standard 1, with one each on the front and back ports.

The only downside is the UEFI, which is a bit awkward to use.

The board aesthetics are rather bland, but it comes with full-on RGB lighting.

Best AM4 Motherboard for Gaming 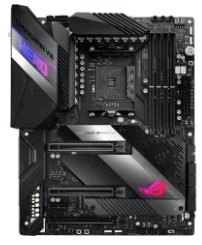 This is the best high-end AMD X570 for enthusiast gamers and overclockers who want some extra oomph. It pairs well with the much-lauded Ryzen 9 3900X chip.

It’s packed with features, and is incredibly powerful and reliable.

There is the more expensive Crosshair VIII Formula variation, but we think the extra money just isn’t worth it in terms of overall performance.

It comes with a strong voltage regulator, lots of USB 3.2 Gen 2 ports, Wifi 6 and a stellar audio codec in the form of ROG SupremeFX.

Memory is DDR4 RAM supporting up to 128GB over 4 RAM slots and 8 SATA ports.

There’s 3 full-length PCIe slots, 2 of which are reinforced. All support SLI twin or CrossFire twin- or triple-card installations.

The voltage regulator is covered by 2 heatsinks, which are cleverly connected by a heatpipe. The chipset also has a large heatsink and a small fan, which is quiet and can last up to 60,000 hours.

The only issue is the chipset fan might be blocked when using a dual-slot graphics card, which isn’t ideal.

There’s 16 IR3555 PowIRstages that can handle 60 amps each, perfect for overclocking.

It comes with a power and reset button, as well as very handy voltage read points.

The BIOS is well-organized. It features beginners and advanced modes, as well as a ton of overclocking options.

It’s all-black aside from a grey steel diagonal stripe running across the board.

They go for an understated RGB look on the rear I/O shroud and chipset heatsink, including an ROG logo, but it comes with more headers if you want the full bling effect.

ASRock Phantom Gaming X – slightly cheaper if you don’t want to overclock as much.

Best AM4 Motherboard for Video Editing 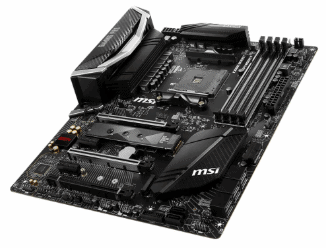 This motherboard is much more suitable for video editors than gamers, with an emphasis on stability, storage and audio quality, rather than overclocking and aesthetics.

It’s also mid-range in price, allowing you to invest more in a decent CPU which is crucial for video editing.

The board is rather plain looking, just black with some silver lines, and some RGB lights on the rear I/O shroud, chipset heatsink, and one of the edges.

The memory and PCIe x16 slots are steel-reinforced.

It features 8 SATA 3.0 ports and a generous two M.2 slots for storage devices. The first slot has a heatsink and is designed to connect to your CPU, and works perfectly with Ryzens, operating with a PCI Express 3.0 x4 connection, the best possible.

Audio is high-quality for the price. First off, it’s separated from the rest of the motherboard to reduce signal degradation. It comes with a Realtek ALC1220 DAC audio codec that has a 120dB signal-to-noise ratio. There’s also high-quality capacitors, a headphone amplifier, and an EMI shield to help guard against electromagnetic interference.

The BIOS has rather basic overclocking options, but this isn’t an issue for video editors.

Best AM4 Motherboard for Streaming 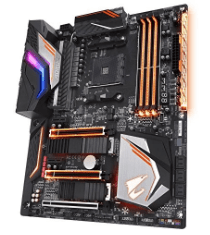 If you’re looking to use a AMD Ryzen 2nd Generation chip for streaming such as the quality Ryzen 7 2700X, this is the best motherboard sporting the AMD X470 chipset.

Memory is DDR4 with speeds of DDR4-3600, with up to 64GB over 4 RAM slots, and support for ECC memory for un-buffered modules.

It includes 3 PCIe slots, the top 2 supporting Gen3, and the bottom Gen2.

It’s wifi-capable with 2 wifi antenna ports, and also provides Bluetooth 5 support. A wifi antenna can be positioned away from the motherboard for a stronger signal.

For gaming, this model beat several competitor models when playing Ashes of the Singularity: Escalation at mid-quality.

Best Budget AM4 Motherboard for Gaming 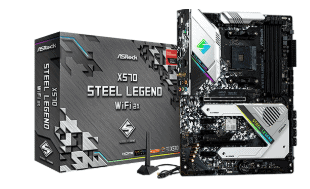 This model has enough power with its 10-phase power delivery to handle the top Ryzen 3000 processors, which is extremely rare at this price point.

Wifi isn’t included, which is to be expected, but you can install your own via the M.2 Key E 2230 slot.

In terms of gaming, it actually performed better than many higher-priced X570 models in all game settings, including against the ASRock X570, and Gigabyte X570 Aorus Master.

It was also 12% more efficient than these models.

Which AM4 Motherboard Should I Buy?

The best AM4 motherboard for most people is Gigabyte’s mid-range X570 Aorus Ultra, sporting the latest chipset with great performance, stability and overclocking.

Serious gamers, however, will want to opt for the high-end Asus X570 ROG Crosshair VIII Hero Wi-Fi, with an extremely strong and well-cooled voltage regulator and incredible memory and overclocking.

If you’re just looking for a cheap well-rounded motherboard, that would be the Gigabyte Aorus AX370-Gaming 5.