If you invested in a powerful CPU, chances are you also need a cooler, and a good one.

If you’ve bought this powerful CPU, you definitely need a good cooler to with it.

Otherwise you risk your precious processor burning out early, or performing more slowly, ruining your investment.

Fortunately, we’ve done the legwork for you and scoured all the current coolers to find the top 5 for the i7-8700k.

Read on to find out which is best for you.

What Kind of Coolers Are Out There?

Liquid coolers uses a pump and copper heatpipes filled with liquid to transfer heat away from the CPU, as well as a more efficient radiator. 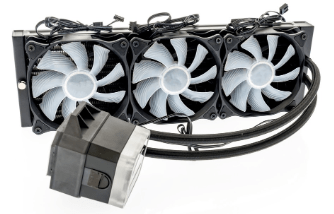 As the liquid is pumped through the side of the radiator, aluminium fins within the radiator conduct heat away, and the radiator fans dissipate the heat. The liquid then travels back along the radiator, cooling it further, before travelling back to the pump in an ever-repeating process.

Liquid is way more thermally conductive than gas, and radiators are better at dissipating heat, so liquid coolers are generally a lot more efficient than air coolers.

Liquid coolers will keep your CPU running cool at all times, improve overclocking potential, and are less noisy.

But due to this, they’re more expensive.

Air coolers use pipes to transfer heat as gas away from the CPU, which is less efficient.They don’t have a pump or a radiator, and just use a fan instead. 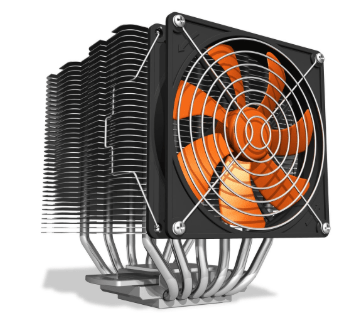 The metal pipes can be composed of copper, which is best, or aluminium, which isn’t so efficient, or a combination of both.

Believe it or not these pipes actually contain a liquid coolant at the base, but this evaporates as it’s heated up by the CPU, and travels up through the pipes as gas.

Fins surround these pipes, conducting the heat out to a larger surface area. The fins are cooled by the adjacent fan, which pushes the heat out of the system. The gas then condenses back to liquid and falls back down the pipes, to repeat the process.

However, the lines are becoming blurred. High-end air coolers can perform as well or better than a 240mm liquid cooler.

And many large air coolers are near silent, with whisper-quiet fans and enormous fins. 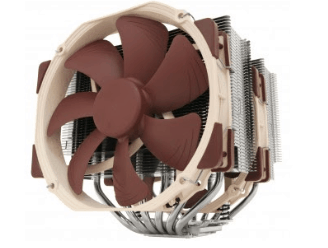 This air cooler is the best option for most people.

Noctua is a small cooler company that offers a great caliber few manufacturers can match, and all of its products are high quality.

The NH-D15 is their best offering and although expensive, it represents amazing value for money. It’s an air-cooler, but performs just as well if not better than many liquid coolers. So you get great cooling performance for much less.

One major downside of air coolers is that they tend to be noisier, but again the NH-D15 bucks this trend by being near silent.

Compared to its predecessor, the already excellent NH-D14, the fins are widened by 10mm and spaced further apart for even better heat dissipation.

It’s a dual fan arrangement with up to 1500 RPM, coupled with six heat pipe dual radiator design. Their fans are one of the best out there in terms of design.

It also comes with an incredible six year warranty. 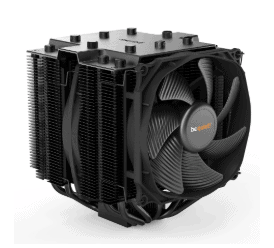 Like the NH-D15, the Pro 4 has two tower radiators, a middle and front-side fan.The seven copper heat pipes conduct heat away very effectively.

Although the cooling performance of the Pro 4 is a little bit behind the NH-D15, it’s only by a few degrees, and many users much prefer the design over the brown NH-D15, with it’s sleek all-black look and lack of RGB lights.

The Silent Wings 3 120mm and 135mm fans keep it incredibly silent when not overclocked, and extremely quiet when overclocked as well.

It’s actually more silent than most other models before overclocking, including the NH-D15 and pricier models.

The mounting system is much improved on its predecessor, the Dark Rock Pro 3, and it’s much easier to assemble and install.

The bottom fins leave space for memory, so there’s improved RAM compatibility despite the size.

It comes with a 3 year warranty.

If you want to make the leap to a liquid cooler, this is the best option.

However, although the H100i Pro is only 240mm, its cooling performance is similar to a 360mm model, for example the NZXT Kraken X72, and even its own H150i Pro. This means you get incredible bang for your buck.

On the flipside, its fast 120mm fans running at 2400+rpm means it’s not the quietest of liquid coolers, and gets noisy at full speeds.

You can control the fans through its iCue software, meaning it’s pretty customizable.

Design-wise, it’s RGB lighting is a bit understated, which may be a pro or con depending on your preferences.

Finally, it comes with a great 5-year warranty.

The X62 is a high-end 280mm liquid cooler for those who want to really push their CPU. You’ll have plenty of extra capacity to overclock.

Armed with a large 280 mm radiator typical to the Kraken series, this gives it a larger surface area to cool, really enhancing cooling capacity.

It’s pretty much just as good at cooling as the subsequent X72, which is a lot more expensive, so we reckon you should save a few bucks and stick with the X62 instead.

Best of all, despite all this power it’s near silent, even at high loads. It clocks around just 33 dB(A) at full load. This might be in part due to its redesigned quieter pump.

It also comes with a generous 6-year warranty.

The CAM software lets you control cooling, customize lighting and of course keep an eye on temperatures. 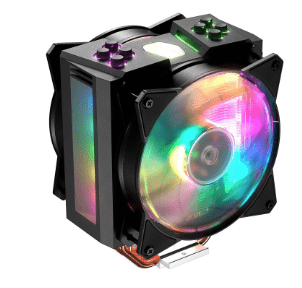 This mouthful of an air cooler is our pick for a more budget option, suitable for slight to moderate overclocking.

You can also add a second fan to the back of the tower to improve cooling by a few degrees.

It also includes a thermal probe for accurate temperature readings via the RGB lighting. There’s also a nice option to change the RGB colors to help you monitor temperature changes (red for too hot and blue for cool).s

The LED setup is unusual, laid out around the fin stack rather than on the fans, which seems to have gone down a storm with users.

For this price, something has to give…and that’s the noise levels. Noise levels weren’t bad at normal speeds, but are louder than most at high loads.

It’s also a bit of a pain to install.