Are you looking to buy a cooler for your precious CPU?

You want it to be capable enough and look good, but also quiet; who wants loud fans droning in their ear all day?

But how much do you need to spend exactly? Can you afford both decent power and near-silence within your budget?

In this article, we look at the best options for budgets and purposes, from gaming to video editing, as well as general use.

What Makes a Good CPU Cooler?

There are two main types of coolers: air coolers and liquid AIO coolers. Air coolers use gas heatpipes and fans to cool, whilst liquid AIO (all-in-one) coolers use a pump, liquid, and a radiator.

Air coolers tend to be cheaper but larger and less efficient, as air is much less thermally conductive than liquid, and radiators make a more efficient cooling system.

In general, the larger the radiator or fans, the better the cooling performance. Basic models have 1 fan, whereas higher-end models have 2 or 3.

Noise is also a major issue, as many users prefer a silent or near-silent PC experience. Some manufacturers, like be quiet! prioritize silence in their builds.

The more fans there are, the more likely it is to be noisy, so sometimes you have to sacrifice silence for power, though there are exceptions.

How We Choose CPU Coolers

Real-life testing is crucial for coolers, as specs can’t tell us much about how coolers actually perform.

Some can be vague, particularly for noise. For example, 9-36dBA doesn’t mean a lot, as you want to know what kind of noise is produced at different loads and when overclocking.

Testing all coolers against the same CPU is helpful to compare performances between coolers, even if that CPU isn’t the one you’re going to be using.

We always bear the user purpose in mind in our recommendations, instead of just saying “this is the best cooler.”

If you can get away with a budget cooler, why spend more?

We look for coolers that punch above their weight in terms of budget. We always ask, can you get better elsewhere for the same price?

For example, if a fancy new expensive version of a model comes out but doesn’t make enough performance leaps, we’ll take a pass. 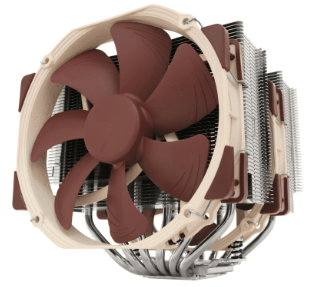 Rotation frequency: Up to 1500rpm

You can’t beat this much-loved cooler from the incredible Noctua company for overall performance and value.

You might not have heard of Noctua, but they’re famous in the cooler world for being a small but extremely high caliber cooling manufacturer. All of their products are of a great quality few competitors can match.

The NH-D15 is their flagship product. Although its an air cooler, it performs in the same league as a decent liquid cooler, representing great value for money.

And it also bucks the trend of air coolers being noisy, achieving near silence with giant 140mm whisper-quiet fans. Their fans are one of the best out there in terms of design and noise levels are just 24.60dbA max.

It has a six heat pipe dual radiator design, with fan speeds of up to 1500rpm. The aluminium fins are 10mm wider and spaced further apart than its predecessor, the already top-of-its-game NH D-14.

It also comes with an incredible 6-year warranty, which is rare.

This does of course mean it’s rather bulky, pretty much the only downside we can see for this cooler. It may not be compatible with some PC builds, so it’s worth checking first. 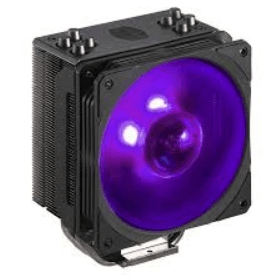 The Cooler Master Hyper 212 Evo was always one of the most popular budget coolers, and for good reason.

For the money, this series generally outperforms all the competition.

The new RGB Black Edition is a welcome release in the latest of minor updates, with a sleek black look and now RGB lights.

It comes with an improved 9-blade 120mm fan and is well-designed, still boasting a quad-pipe heat design with Direct Contact Technology and stacked fins.

The big question is can you get away with using this? It’s suitable for most mainstream builds, but won’t be able to do battle with top chips like the Ryzen 9 series, or Core i9s.

It’s great if you want to a little better performance than your stock cooler, or if your chip doesn’t come with a cooler at all.

At this bargain price it’s obviously not going to be the quietest of coolers, and at full fan speeds there’s no getting around that it’s rather noisy. However, at 50% or less it’s great because of the single fan. This means it’s actually quieter in some cases than it’s mid-range cousin, the Cooler Master Masterair MA410M.

It comes with a 2-year warranty, perfectly acceptable in this price bracket.

Cryorig H7 – an oldie but goodie

Rotation frequency: Up to 2,800rpm

Armed with a redesigned pump and hefty 360mm radiator, this behemoth will tackle even the most heat-generating processors.

If you’re a gaming enthusiast looking to overclock the hell out of their CPU, this is the cooler for you.

As long as you can stand the price and its compatible with your system, there’s no reason not to buy this top performer.

It clocks just 53C at full fan speeds, over 2C cooler than the Corsair H150i Pro

Despite the 3 fans, it still achieves near silence. A few other competitors are slightly more silent at the highest fan speeds, but we’re not really talking about anything noticeable here.

The silent mode is particularly effective. Whilst it may increase temperatures by about 2-3C max, it means you won’t be able to hear a thing.

The pump face is attractively mirrored and lit with RGB. Their CAM dashboard is rather advanced and lets you look at system memory and storage, as well as the usual cooling and lighting.

It also supports Threadripper processors, bringing the two giants together.

CoolerMaster MasterLiquid ML360R RGB – another monster of a cooler.

Rotation frequency: Up to 2,400rpm

The Corsair H100i Pro is another much-lauded favorite, and its specs make it perfect for video editors.

It’s one of the cheaper liquid coolers, since it’s only 240mm. However, cooling-wise it performs almost just as well as most 360mm models. This includes the top-end NZXT Kraken X72. Can you say value?

It’s also less bulky than most.

There’s a great 5-year warranty, which doesn’t quite match the NH-D15, but it’s still excellent.

The only downside is, I’m afraid, noise, but only at full loads when/if going into high-end rendering. In this it falls behind the Kraken mammoth, but you are getting a much cheaper, smaller model.

And you can’t really blame it, with its smaller 120mm fans running at an incredibly fast 2400+rpm.

The RGB lighting isn’t as in-your-face as other models. Some may think this more sophisticated, and others dull. This and the fans can be controlled through iCue software.

be quiet! Dark Rock Pro 4 – if being able to work in silence is your priority 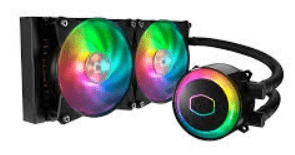 You need to invest a fair amount of money if you’re going to streaming, particularly if high-end gaming and streaming at the same time.

This is another cooler that punch above its weight, or should we size. It’s a 240mm model, but with a similar cooling performance to the much larger Raijintek Orcus 360, a 360mm model with 3 fans.

It also beats the NZXT Kraken M22 and Dark Rock Pro 4 in terms of cooling at 100% load, which is staggering.

The ML240R comes with a large pump and 2 120mm fans with 9 transparent blades. These go up to 2000 rpm according to the manufacturer, but can actually go higher in practice.

However, in terms of noise the M22 is quieter (and of course the be quiet! model is too). But noise levels are still only 35dbA at 100% load, which is considered less than silent. Overclock it, and it will pass the 40dbA mark, and will be noisier than a lot of models.

This model has been superseded by the Cooler Master MasterLiquid ML240P, but the actual performance gains aren’t worth the price in our opinion.

Although it’s not going to win any awards for top dog, this is all the power you need for cooling a decent streaming chip, at a great price.

Many approve of the design, with an all-black sleek look and large, RGB-filled pump. The RGB lights can be controlled by a handy LED controller.

The size is another plus, and it should fit in most modern cases.It’s easy to install, though there is a fair amount of cabling to deal with.

Unfortunately, it only comes with a 2 year warranty. 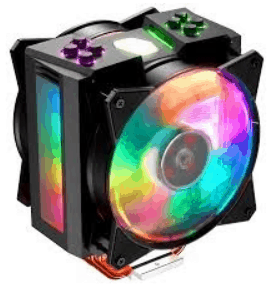 This is a perfect mid-range option that’s still powerful enough for a lot of gamers looking to push slight to moderate overclocks.

It’s a steady performer with 4 copper heatpipes, two 120mm Air Balance fans running up to a speedy 1800rpm, and 57 fins.

It’s smaller than the other air coolers beasts on our list, and so more likely to be compatible with most builds.

A nice trick is that it can take temperature readings via the RGB lighting, and change color to alert you to changes (blue for cool, red for too hot).

The RBG lighting is also very different to most, which some find extremely stunning. THe LEDs are around the fin stack, rather on the fans.

At this price and that fan speed, you can’t expect near silence. Noise levels weren’t bad at normal speeds though, but are definitely louder than most at high loads.

It’s also a bit of a pain to install.

Which CPU Cooler Should I Buy?

For most people needing a cooler for their power-hungry CPU, you really can’t go wrong with the amazing NH-D15 from Noctua. It’s an air cooler that behaves like a liquid cooler, and is super quiet.

But if you’re looking for a real bargain, the Cooler Master 212 series remains the queen of budget coolers, with the RGB Black Edition a nice RGB update.

For high-end gaming, the NZXT Kraken X72 beast reigns champion with a hefty 360mm radiator, but also near silence for the perfect gaming experience.

Gamers with tight purse-strings might try the mid-range Cooler Master Masterair MA410M instead, which can handle slight to moderate overclocks.

Video-editors should try the powerful Corsair H100i Pro, whilst streamers will do well with the MasterLiquid ML240R RGB.

Before you buy, remember to make sure it’s compatible with your processor as well as overall system.