Are you a gamer on a serious budget? Not everyone wants to take the risk of building their own PC, especially when there’s plenty of cheap prebuilt gaming PCs around.

After all, you can always upgrade later.

We’ve scoured the net for the best deals on gaming PCs under $400, so read on to find your dream gaming desktop.

Here’s the key specs to watch out for when shopping for a gaming PC:

Graphics cards accelerate the manipulation and creation of images, and are the most important component for gamers, no doubt.

Standard PCs just go for an integrated graphics, which are useless if you want to do any kind of meaningful gaming.

Unfortunately, decent GPUs are extremely expensive. Therefore, at under $400, you’re going to have to make some serious compromises. Forget 1080p AAA gaming on high, it’s just not going to happen.

But don’t despair, 720p gameplay, 1080p on low, MMORPG games and esports are well within your reach. There’s plenty of gaming fun still to be had.

The processor (Central Processing Unit) is like the brain of the computer that handles all the tasks. More CPU power means it can handle more intensive tasks, or more low-end tasks all at once.

For example, there’s Intel processors like i3, i5 or i7 ranging from least to most powerful.

An i7 is definite overkill for gaming, especially when your other specs aren’t going to match up. However, some $400 models sport an i5 equivalent, which is perfect.

Many gaming PCs opt for AMD Ryzens instead, which are suited to gaming.

RAM is the memory of your computer, and the more you have the more tasks can be completed simultaneously. A low RAM means a sluggish computer.

RAM should be 8GB minimum for comfortable gaming, particularly with Ryzen chips are they’re RAM-hungry.

Storage is where everything is stored, from photos to documents to the OS.

HDDs are cheaper and so can hold more, but SSDs are faster. Many PCs offer a hybrid of the two, which is ideal.

How We Choose Gaming PCs Under $400

Specs are important, but gaming testing and benchmarks are even better. You need to actually play the games to see what kind of playability you can realistically get. Also, how about the screen, keyboard and mouse? Are they comfortable to view/use?

We always bear the user purpose in mind, instead of just going for the highest specs.

PCs vary wildly in price, so don’t spend more than you need. And the most important question is, can you get more for your money elsewhere? 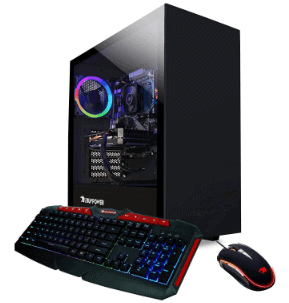 A popular budget model, it comes with AMD’s APU, a CPU with integrated graphics on board.

The CPU is a quality Ryzen 3 3200G. The 3rd generation of Ryzens up their game with the much-lauded Zen+ architecture, and includes 4 cores, 4 threads and a 3.6GHz base clock speed.

Radeon RX Vega 8 is of course included on the APU, however, oddly the Enthusiast also packs in a separate dedicated GPU, the NVIDIA GeForce GT 710.

But to be honest, the GT 710 is an ultra low-end graphics card anyway, and slightly inferior to the Vega 8. Including both is a bizarre choice and it’s a shame they didn’t use the budget on more RAM, or a better single GPU.

It can game comfortably at 720p on low settings. Fortnite achieves 60fps on medium to high settings. Esports at 900p are also solid. However, 1080p games on high reach just 31fps for GTA V.

Storage is plenty, with 1TB of HDD, though no SSD is included for increased speed.

RAM is also plenty enough at 8GB of DDR4 memory. A lot of budget models cut down to 4GB, which isn’t really enough for gaming.

What about looks? 10/10 in our opinion, with the typical black look, transparent side panel RGB-lit fans inside that give it a much more premium gaming look. Even the keyboard is back-lit.

You can either go for a full RGB option, or an all-red option with a diagonal stripe down the side which looks great against the black.

Best Bang for your Buck Gaming PC Under $400 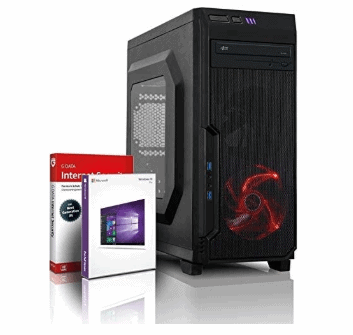 Shinobee definitely isn’t a premium or even well-known brand, but it does offer some really cheap gaming PCs.

You get a large 16GB of RAM. It should be noted this is DDR3, as opposed to the DDR4 most offer these days. However, gaming-wise there’s not much difference, as you can see on this gaming test.

So basically, 16GB of DDR3 RAM is definitely far superior than 8GB of DDR4 RAM, which is the standard at this budget.

You also get a nimble 128GB SSD of storage, along with a hefty 1TB HDD. This combination of the two offers the best of both worlds.

A dedicated graphics card is built-in, which is unusual, in the form of an NVIDIA Geforce GT 710. However, before you get too excited, this is actually inferior to the Vega 8.

The CPU isn’t so impressive, an AMD FX 8300. This is far inferior to a 3rd gen Ryzen, however it’s still got 8 cores. The base clock is 3.5GHz, whilst the boost is a respectable 4.2GHz.

Connectivity is ample with 6 USB ports, as well as Wifi.

It also comes loaded with Microsoft Windows 10 Professional. This a bonus if you need it, as normally only the Home version is offered at best.

You get a nice 2 year warranty with 24/7 access to support.

Looks-wise, it’s an all-black mid-tower that definitely looks like a gamers PC, however the style is a bit unusual. Part of the left panel is transparent, but most of the front panel is mesh instead of transparent, allowing you to see the two large at the front, one of which is red-lit. 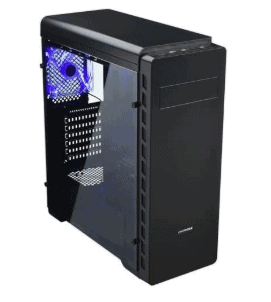 Again, AVGPC isn’t a well-known brand, however the build is quality with a solid chassis and cleanly-routed cables.

This is another model that sports the rare NVIDIA GeForce GTX 1050, a great GPU for the price that’s going to give you superior gaming.

Storage is plentiful with 8GB of DDR4 RAM, and a 1TB HDD. Sadly no SSD, but with that graphics card, we’re not complaining.

It comes almost fully kitted-out with Windows 10 Pro, and a keyboard and mouse. No Wifi though.

For connectivity, there’s two USB in the front and 6 in the rear. A DVD drive is also included.

The case is of the gamers style, with the transparent left side-panel, however the rest of the chassis isn’t anything to write home about. From the front, it looks like any other home PC. The blue-lit fan and power button are nice touches though. 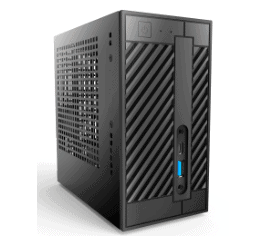 A nifty little compact option, but don’t let the size fool you; this packs more punch than most of the other models on our list.

If you’re looking for a huge RGB gaming PC with a transparent panel to show off to your friends, this isn’t the one for you.

Others will appreciate its compact size, so you barely notice it’s there, and making it extremely portable.

It even comes with a modern USB-C connector, so you can charge it on the go.

Alternatively, you can keep it one place and use its connectivity to sport up to 3 screens to really max out your gaming experience.

This is another AMD model running a solid Ryzen 3 3200G CPU, along with Vega 8 graphics, which is equivalent to a low-end discrete GPU.

However, it ups the game compared to most, with a fantastic 16GB of storage. This is extremely rare for our price range, and a gamer’s dream. It’s particularly relevant for AMD CPU’s as they are pretty RAM-reliant.

Also, storage: storage is NVMe SSD, instead of the usual HDD. NVMe SSD is basically the cream of the crop when it comes to storage, with extremely fast transfer speeds of up to 3GB/s.

Both the RAM and storage included are usually premium features, so you’re getting a far superior gaming experience than you should at this budget.

The downside is you don’t get the usual keyboard and mouse, or even, sadly, Windows, which is a chunk of change in itself.

Wifi’s included, but there’s also no optical drive. Although you get the famed USB-C, you only get one USB 3.0 port.

Also because of its nature, it’s obviously not upgradeable. But to be fair there’s not much to improve on, unless you wanted to spring for an expensive GPU.

You get an impressive 3 years warranty if you spring for the 512GB. 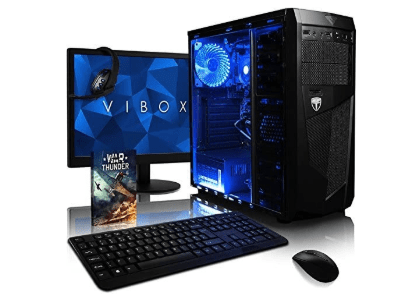 VIBOX’s stand-out feature is the discrete GeForce GT 1030 GPU, which is superior to AMD’s Vega 8 usually included in many budget gaming PCs. This means higher fps, less frame rate loss, and more games can be played acceptably at 900p.

Storage-wise, there’s a fairly standard 8GB of RAM, though it’s DDR3 unfortunately, and a 1TB HDD.

It’s fairly attractive, black with a two-thirds transparent panel on the left and a blue-lit fan inside. However the rest of the chassis isn’t clean-looking, and rather chunky.

Windows 10 Home is included, however you’ll have to buy your own monitor, keyboard and mouse if you haven’t got one already as this variation is PC-only to save on costs. 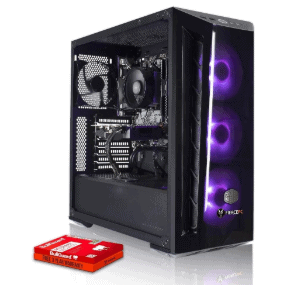 For gaming on a budget, this Fierce model delivers in spades.

Fierce is an expert at building a ton of gaming PCs for cheap. However, the motherboard is an Asus and the case is Cooler Master, so you’re in safe hands.

This model is hugely popular with budget gamers.

Storage is a large 1TB HDD, but again no SSDs here.

Gaming is great for esports and MMORPG games like WOW, and again comfortable at 720p on low for games such as CS:Go and Rocket League, but you may suffer some frame rate loss for the most intensive games.

Still, you can game comfortably at 720p on low settings. Fortnite achieves 60fps on medium to high settings. Esports at 900p are also solid.

You get everything included here: Windows 10, a wifi adaptor, and even a year of free Bullguard Internet Security.

Plus, an extremely generous 3 year warranty.

It’s one good-looking gamers case, with front-facing RGB fans visible through the transparent front panel, as well as another two-thirds transparent panel on the side. Plus, you get the Cooler Master logo. 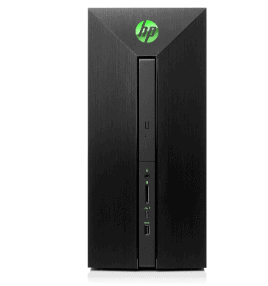 If you want higher-end gaming, but don’t have the budget, there’s also another option: a refurb of a much better PC.

This is far superior to any other GPU on our list. Forget 720p gaming on low settings…with this baby you’re looking at comfortable 900p gaming, or even some titles at 1080p gaming on low.

You also get a nice Intel i5 Quad Core processor, as well as plenty of storage with 8GB of RAM, and a 1TB HDD.

The downside is of course it’s refurbished, so there’s more risk, and you don’t get that ‘new’ feeling.

Also, looks definitely shouldn’t be a priority, since it comes in a clunky-looking case that just looks like a boring office PC. No RGB lights, sleek transparent panels or gaming keyboard here.

However, if you can sacrifice specs for looks and really want that 1080p gaming, this is a great option.

Which Gaming PC Under $400 Should I Buy?

Most gamers will be satisfied with the popular iBUYPOWER Enthusiast Gaming PC, with its combined Ryzen 3 chip and Vega 8 graphics for comfortable 720p gameplay and upwards.

If you’re not fussed about a gaming case, the compact CUK ASRock DeskMini A300 includes up to 512GB of NVME SSD.