Are you finally taking the leap to the RTX 2080, but not sure which one you should get?

Custom cards have so many different specs, sizes, and cooling solutions, it can be a little overwhelming.

We’ve sifted through them all, from budget to behemoth, to bring you our top five.

The RTX 2080 is the second most powerful card around, taking over from the great 1080 Ti with all-new Turing architecture enabling ray-tracing, all-new GDDR6 memory, and DLSS (Deep Learning Super Sampling).

DLSS is an AI technology which is able to smooth out rough edges without a performance-hit, as opposed to the usual anti-aliasing.

Not to mention, the RTX 2080 has way higher memory and clock speeds over the Ti.

Some argue that the 1080 Ti still gives better performance on some games. However, with ray-tracing looking to be the future of gaming (right now, around 14 games support it), the RTX 2080 is a very wise investment.

However, they turned this on its head with the 2080, bringing out a dual-fan, overclocked and attractive Founders Edition.

This meant custom GPUs have had to really up their game, and think hard about pricing, which is great for consumers.

Read on to find out our top five. 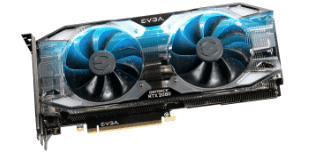 This card is widely regarded as the best RTX 2080. It’s made by EVGA, known for their quality and for having the best customer service around. So at least you know you’ll be in good hands.

It takes up a massive 2.75 slots, mostly due to the ultra-thick heatsink which runs the lengths of the card, enabling it to keep very cool. However, it’s not any longer than the Founders Edition card so it should fit into most cases otherwise.

In practice, however, it’s a lot higher; more like 1,920MHz. This translates into a huge boost in gaming performance.

The design is a neutral clear plastic shroud which will blend in with any PC build. Some won’t like that due to the build-up of dust being visible; a bit like buying a white car, you know it will never look as good as when you buy it.

However, the transparent design does show off the beefy heatsink, and it comes with RGB backlighting the massive logo too. You can also get it with either a black or red trim if you want it to look a bit more unique.

The backplate is sturdy yet well-vented, and aids in cooling with thermal pads on the memory and VRM.

There’s  three DisplayPorts, one HDMI, and one USB Type-C.

Thanks to the enormous heatsink, it runs nice and chill, reaching max temps of 68°C, and usually at just 62°C when gaming.

Acoustics aren’t quite as impressive, reaching 38dBA maximum, which isn’t the most silent model but since it’s not hitting 40dBA it’s probably not really audible either.

There’s a little room for overclocking, which is dead easy to do.

In short, it’s a top performer in the RTX 2080 range. You will pay a premium, but it’s not ridiculously expensive (as in, you might as well fork out for a Ti) and as such hits a premium sweet spot that will appeal to many. 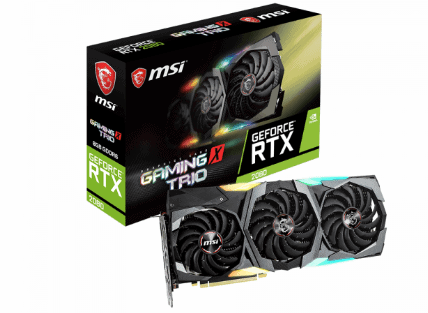 The MSI is another premium fully-featured offering, with aggressive overclocking, robust cooling, three fans, and RGB. It’s the highest air-cooled RTX 2080 from MSI.

Let’s start with the overclock; with a zippy 1,890MHz boost, that’s almost 10% higher than the Founders Edition card’s 1,710MHz. Basically, as high as you can get.

The power rating is much higher than most, too, at 260W, giving you plenty of juice for overclocking.

With three high-quality MSI fans and a massive heatsink to work with, MSI’s TriFrozr cooling is extremely robust.

There’s two larger fans and one smaller, which can be controlled separately. The fans also come equipped with double ball bearings to keep things silent, and don’t spin under 60°C.

If you’re a fan of RGB, the MSI is definitely the one to pick. It looks stunning visually, with lighting on the top and side of the card. A lot of cards on this list only have one zone. There’s lots of versatility with it too using the MSI Mystic Light software.

The backplate has a nice brushed aluminium finish.Definitely the best looker on the list.

The connectivity is pretty standard with three DisplayPorts, one HDMI, and one USB Type-C.

It’s extremely cool and quiet, too. The max temperature was just 67°C when overclocking, and it was just 35dBA at its noisiest.

Your only problem is going to be whether it can fit into your case. At 32.7cm, it’s a staggering 20% longer than the Founders Edition. It also takes up 2.5 slots, as do a lot of others on here.

It’s so big it comes with its own fancy-looking support bracket, which you can use if you wish.

It screws into the PCI-card backplane positions and there’s a rubber contact with the card to reduce vibration. 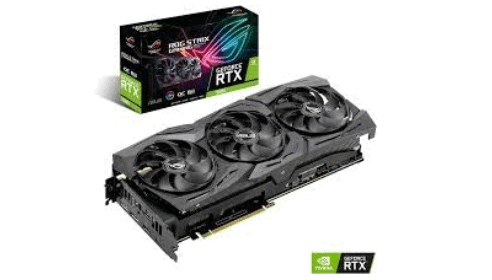 Another mammoth card, this three-fan model is packed with features and incredible on performance.

It overclocks to a boost of 1,860MHz, slightly lower than MSI but a lot higher than the EVGA. However, on OC mode using the Tweak II software, you can actually boost it to 1,890MHz, which is the same as the MSI.

It’s rated 225W and needs two 8-pin connectors rather than the usual 8 and 6 combo, which should mean more oomph for overclocking. However, overclocking beyond the specs isn’t as great as some other models.

It’s a nice-looking model typical of the Strix series, with a matte black shroud and dark accents. It’s a giant 30 cm long, and so they’ve included a metal brace to ensure rigidity.

The massive heatsink incorporates MaxContact Technology, with twice as much surface contact between the heat spreader and graphics chip.

It comes with a ton of RGB, on the two logos as well as on the fan accents, fully controllable via Asus’s Aura Sync software. If you want them off though, you can do this with a click of a button on the backplate. Very handy.

Maximum temperatures under load are a real high point for this card: just 64°C! This wipes the floor of the competition.

It’s also dual-bios, so you can flip between Performance and Quiet mode if you want a completely silent experience. Quiet mode means the fans don’t spin up to 55°C, whilst Performance Mode prioritizes lower temperatures.

Noise levels aren’t the quietest on our list in Performance Mode, though still under 40dBA.

However, you get silence in Quiet Mode, which we highly recommend using as default, since you get the same great performance as in Performance Mode, so there’s nothing to lose. 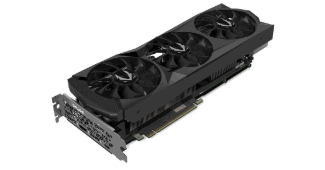 This is one giant of a card, taking up 2.5 slots, and it’s long too due to the three fans, measuring 30.7cm, so it might not fit in some cases.

If it does though, you’re onto a winner. This is Zotac’s flagship RTX 2080 card, yet is very affordable. The gameplay isn’t as strong as the more expensive cards on this list, but it still makes for comfortable 4k gaming.

First up, gamers will be pleased with the extremely high clock speeds, with a boost of 1,830MHz. Plus, there’s room for more overclocking too. Unfortunately, overclocking isn’t the easiest in the world.

Like the EVGA model, the Zotac goes big on its heatsink, with five 8mm copper heatpipes and aluminium fins galore visible through the fans.

The three fans are 90mm, with two fan controllers so you can control them separately.

The build is a bit cheap-looking, with a plastic fan shroud. RGB is present with eight color options, though it only backlights the logo.

Ashes of the Singularity: Escalation managed to reach an excellent 72fps on 1440p. Shadow of the Tomb Raider reached a similar 71fps on 1440p, and a still comfortably playable 43fps on 4k.

There’s 6-pin and 8-pin power connectors, and it’s got the same 225W power rating as the Founders Edition card.

Connectivity-wise, there’s three DisplayPorts, one HDMI and one USB-C. 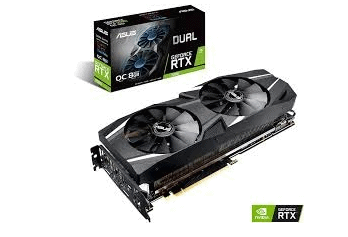 For those who can’t afford the Strix, this is a much more affordable dual-fan model from Asus that still gives a pretty great performance, but sacrifices on looks.

So if you can’t compromise on aesthetics and need that RGB, this isn’t the one for you. It doesn’t have any RGB, and the design is dark matte plastic with a few white stripes. Overall it’s very plain looking, and the white stripes cheapen it somewhat.

It’s not too long at 26.5 cm in length, so unlike a lot on this list it should fit in most cases.

Sadly it’s not overclocked to the reference card, with a 1515 MHz core clock and 1800MHz boost.

Both the temperature and noise aren’t the lowest on our list, but still decent. The max temperature is 71°C, and the max noise level is 38dBA.

Onto the gaming, and this is where you see some real value for money. Battlefield V plays at 104fps on 1440p, and an extremely impressive 63fps on 4k. Shadow of the Tomb Raider is disappointing, though, reaching 84fps at 1440p, but only 45fps at 4k.

All the standard connectors are here: three DisplayPorts, one HDMI, and a USB-C.

The power rating is an average 225W, with 6-pin and 8-pin power connectors. 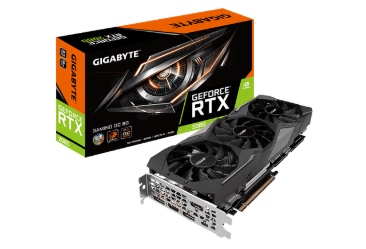 The best budget offering comes from Gigabyte, with a very affordable no-frills option.

It’s cooler and quieter than the Founder’s Edition, has semi-passive cooling, and also comes with a four year warranty, as opposed to Nvidia’s three years.

Surprisingly for a cheaper model, you get three fans. This makes it a bit of a monster, taking up three slots, but isn’t too bad lengthwise at 28.7cm.

It’s light too, at just 1.2kg. This is probably due to the lack of metal base plate and cheaper materials which are heavy on plastic.

They go for a typical matte black design, and it even comes with RGB on the logo, which is fully configurable using RGB Fusion software.

There’s also a handy white LED which flashes if there’s something wrong with the power.

It doesn’t skimp on connections: you still get three DisplayPorts, one HDMI and one USB Type-C.

The fans are 82mm, and use Windforce 3X cooling, which means the outer fans spin counter clockwise, whilst the central fan spins clockwise, meaning less turbulence between the fans.

The heatsink is also hefty, with six copper heatpipes. All this pays off with the system running nice and cool at a max of just 68°C.

It’s still slightly overclocked, with a boost of 1,830MHz compared to the Founders Edition’s 1,800MHz. The memory speed and memory is kept exactly the same with 8GB GDDR6 at 14Gb/s.

Obviously the gaming performance isn’t as great as the more expensive models on this list, however it still has no trouble at all with 1400p gaming on the best monitors at the highest settings.

If you’re on a very tight budget, Gigabyte also does a slightly cheaper Windforce model.