The AMD Radeon RX 580 is one of the best value graphics cards for gamers, giving you excellent 1080p gaming for a very low price.

But which variant should you choose? Companies like Asus and XFS put their own spin on this GPU, with different factory overclocks, cooling solutions, connectors and component quality.

These translate into a pretty significant difference in performance, size and looks, so it can be hard to choose. Read on to find out our top five.

What Makes the RX 580 Graphics Card So Special?

The AMD Radeon RX 580 hits a budget sweet spot that no other card can match, including Team Blue.

It delivers stellar 1080p gameplay, even pretty strong frame rates at 1440p, and VR gaming ability. All for an incredibly low price. When it was released, it literally redefined what was possible at its price point.

It pretty much makes all other budget cards pointless because for a few dollars more you can get a far better gaming experience, which most gamers deem worth it.

And Team Blue’s equivalents, like the GeForce GTX 1060, are slightly more expensive and slightly inferior.

So for most price-conscious gamers, this GPU is a complete no-brainer. 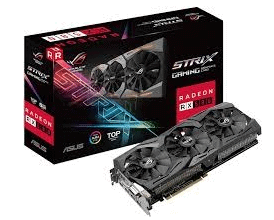 The cooling is second-to-none, thanks to the three Wing-Blade fans with IP5X-rated dust protection. Most 580’s make do with just two fans.

On top of that, there’s a massive heatsink with efficient heatpipes that runs the length of the card.

This is highly efficient, as you’d expect from Asus. It features Asus’s MaxContact technology, with a nickel-plated copper plate over the GPU, and another PCB plate to draw heat into the heatsink.

Despite the fans it’s near silent, producing just 37dBA at load and only 30dbA when idling, since the fans shut down when not necessary. This is an extremely low result compared to a lot of GPUs.

The design is premium-looking yet sturdy, matte all-black and with a metal backplate to prevent future sagging from this overly-long GPU.

The RGB of the Strix logo is a nice touch, along with a glowing Republic of Gamers logo.

The power consumption is understandably not the lowest and requires an 8-pin connector.

The biggest downside is the price; obviously you pay extra for all these premium features.

The other one is the size; with all those fans it’s a beast of a graphics card at 11.73″ x 5.28″, and is dual-slot. So double-check your chassis can handle it before you buy. 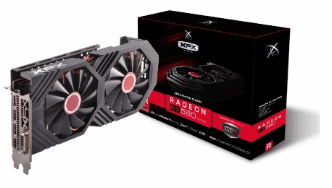 The GTS Black edition has an extremely high clock speed of 1425 MHz. However, although clock speed is higher than the Asus, overclocking margins are tighter, seeming to max out at 1440 MHz.

Two Supercell 100mm fans and a large heatsink taking up a lot of space, with 8mm quad piping, ensure pretty ample cooling, with a max temperature of 57 °C when overclocked.

The carbon fiber effect and red center on the fans combine for a unique look. The glowing XFX logo is a nice touch. There’s also an aluminum backplate to cool the PCB and provide rigidity.

There’s three DisplayPorts, one DVI-D and one HDMI.

Power requires an 8-pin connector and again needs at least 500W (preferred 550W). You can alternate between normal and low noise profiles via a handy switch, a useful feature for mining.

If the Asus ROG Strix won’t fit, this is your next best bet.

Sapphire is another quality brand known for its cooling technology.

Power is only 300W and it’s got the option of either a 6-pin or 8-pin connector.

A lot of gamers choose this GPU just for its looks. It rocks an unusual black and gray look with a metal backplate. The fans are LED-lit in silver, gray,or a nice cool blue. The Sapphire logo glows too.

The great thing about the Sapphire is these fans are easily removable.

The Nitro upgrade comes with Free Flow Cooling, which improves airflow out of the heatsink. Cooling includes two 6mm and two 8mm heatpipes, with 54 fins and black diamond chokes.

There’s two DisplayPorts, two HDMI for VR and one DVI-D.

It can overclock to an impressive 1505MHz, and ran very cool, only reaching 57°C. 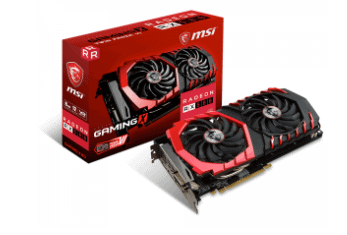 This dual-slot 27cm GPU is slightly cheaper than the above models.

It has a distinct chunky red and black look which you’ll either love or hate. With all that plastic, it’s not the most premium-looking card, however it does stand out, and comes with configurable RGB as well, including several animations.

It comes with a thick metal backplate with plenty of vents, and the heatsink is of a high-quality with 8mm SU pipes.

It’s overclocked to 1393 MHz, which isn’t the highest on our list.

Temperatures are impressive at idle at 35°C, but reached 72°C under full load, which isn’t as good as some other models. Sound levels were 42dBA max as well, which is audible. 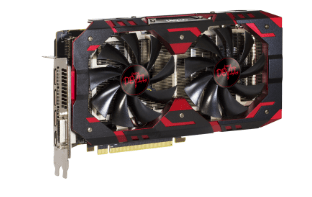 This brand lands on the cheaper side of things, but still manages to pack a nice 8GB.

Looks are similar to the MSI Radeon, a chunky matte black and red affair. However, RGB fans will be disappointed; only the Red Devil logo glows in red.

It still has a backplate for rigidity., though it’s not as well-vented as the others.

Although only 25cm, this is actually a large triple-slot card.

This is to allow for a large heatsink, since this model seems pretty power-hungry and tends to run hot, reaching up to 75°C.

It’s overclocked to a speedy 1425 MHz, and like the Sapphire, it’s got both a 6-pin and 8-pin connector. Connectors include three DisplayPorts, one HDMI and one DVI connector.

Like most of the other models, the two fans don’t spin up to 60°C. Noise-wise, these produce up to 40dBA at load, which is just about audible during gaming. 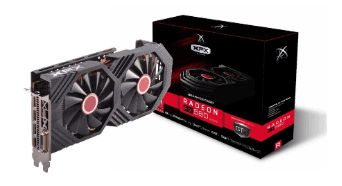 Like most it’s dual fan, dual slot, and with an 8-pin connector. It’s overclocked to 1386 MHz.

The look is pretty basic, no RGB and matte black aside from a dash of red, but it still includes a backplate.

There’s three DisplayPorts, one HDMI and one DVI connector.

It still includes Radeon Chill, a handy optional feature which reduces power consumption by up to 31% when idle, for example if you leave your computer for a while.

The main thing you lose is 4GB of memory, dropping down to just 4GB.

Although it’s a decent card otherwise and is the best of the 4GB models, there’s no getting around that this is going to hamper you somewhat for gaming.

So, we recommend splurging the extra few dollars on an 8GB card if you want to go beyond 1080p.