What’s the Best Thermal Paste for CPUs in 2021?

Even the best coolers won’t save your processor from a poor thermal paste. It’s often overlooked, but a quality thermal paste is essential for effective heat transfer that lasts long-term without drying or wearing out.

The paste it comes with is usually of poor quality and will bottleneck your performance, especially if you’ve bought a half-decent processor and are regularly overclocking.

Fortunately, excellent pastes are cheap nowadays, so there’s no need to break the bank. Read on to find the best current thermal pastes on the market.

What Makes a Good Thermal Paste?

A thermal paste is applied between the CPU and the cooler ensuring there are absolutely no gaps between the two, maximizing heat transfer and keeping your processor cool.

There are a few different features you’ve got to watch out for.

Heat conduction largely depends on what the paste is made of. There are many different types of thermal paste: ceramic-based, metal-based, carbon-based, and hybrids.

Metal-based pastes are generally more effective at heat conduction, but also the most expensive.

Ceramic-based pastes generally contain metal oxides, so aren’t as effective but are cheaper and more popular.

Carbon-based pastes can be as effective as metal-based pastes, and hybrids contain mixtures that combine the best of all worlds, making them the most expensive.

Different pastes have different viscosity, which changes how you apply them. Thicker pastes are generally harder to apply.

Metal-based pastes are also electrically-conductive, which is risky when dealing with electronics. They can short-circuit or damage your processor if applied incorrectly, and probably void your warranty too. Only experienced users should dabble with metal-based pastes.

Generally low-end pastes only last 2 years before they need to be reapplied, whilst high-end pastes can last for around 8 years.

How We Choose Thermal Paste

Although specs are important, real-life testing is even better, for example, how easy it is to actually apply the paste in reality, and how it performs in benchmark tests.

The price has to be reasonable, but even more importantly, can you get more for your money elsewhere? Fortunately, you can get a good quality thermal paste very cheaply nowadays. 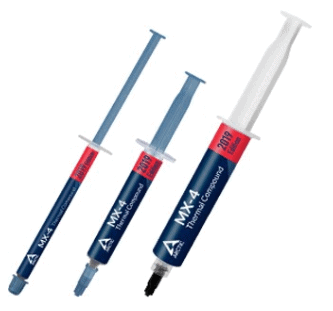 This is the best all-rounder by far, providing elite performance at a very cheap price.

Arctic’s Silver 5 paste used to be the most popular paste around, and every gamer was using it.

However, the newer MX-4 has definitely surpassed it. It performs much better in benchmarks (around 2°C better), lasts way longer, and is also non-conductive, making it much easier to apply.

The Silver 5 has a high silver content and dries out much more quickly.

The MX-4, by contrast, is made of carbon micro-particles, meaning it’s incredible at conducting heat despite not being metals-based, with a stellar 8.5 W/mK thermal conductivity.

Temperatures only increased by a maximum of 1°C under load when tested with the Arctic Cooling Freezer Xtreme cooler, an amazing result.

It’s also cheap, so there’s literally nothing to lose here.

The lifespan is incredibly long, 8 years according to the manufacturer. Not many pastes make this promise.

Application is easy due to its smooth viscosity and the fact that it doesn’t need time to cure. This is ideal for beginner users as it’s hard to mess it up. The syringe method of delivery is very basic.

This is also an improvement on its predecessor, the MX-3, as it is much less dense at 2.5g/cm³, making it much easier to spread evenly. Many MX-3 users complained that their mixture just wasn’t spreadable.

The 2019 version comes in a 4g tube, meaning you can use it on multiple processors if needed. Especially as less is definitely more with this paste.

On top of this, they’re carbon-footprint conscious, which is always welcome nowadays. They’ve reduced the environmental impact of their packaging by 40 %.

be quiet! DC1 – a similarly-priced paste with similar performance, but not as good all-round. 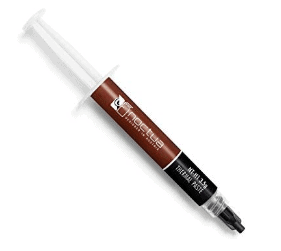 Noctua doesn’t just do amazing coolers, but a high-quality paste too.

The NT-H1 has been around since 2007 but is still a firm favorite amongst enthusiasts and has definitely stood the test of time.

This is mainly because it’s a hybrid paste, an elite mixture made up of different micro-particles, enabling stellar heat dissipation without any conductivity issues.

It’s gray in color and the application is quick and painless with a basic syringe-based method.

There’s no break-in period, and it’s even suitable for sub-zero cooling.

It used to be a much more expensive product, but is now slightly cheaper than the MX-4, making it an unbelievable bargain.

This is due to the release of a newer version, the NT-H2. Whilst technically a better paste, performing about 1°C cooler in benchmarks, it’s way more expensive, so this definitely wouldn’t be a budget option.

The only downside to this product is it only lasts 3 years, compared to M-4’s 8. However, at this price you can’t complain and it will be cheap to replace.

Arctic Silver 5 – if you want something super cheap, Arctic Silver 5 is still very popular, it’s from a good brand and does the job, though it’s conductive as it’s 99% silver.

This is the perfect option for advanced users and gamers in particular. It’s definitely more expensive, but worth it if you’re a serious overclocker.

It’s consistently tested as the best non metal-based option, made of nano-aluminum and zinc-oxide particles to achieve a whopping 12.5W/mK thermal conductivity.

This results in a serious boost to cooling performance. In testing, it beats most other models aside from its metallic big brother, the Conductonaut, which is much more expensive.

It can handle temperatures from -250 to 350°C, one of the widest ranges available, so it is great for both normal and sub-zero overclocking.

Fortunately it still sticks to a simple syringe-based package with spreader included, making application pretty easy, with no curing time. However, it’s quite dense at 3.7g/cm³, making it slightly less smooth to apply than the MX-4.

Predictably it’s built to last, lasting a minimum of 8 years according to the manufacturer.

IC Diamond 24 – comes just behind the Kryonaut in performance, however some users say it scratches up their surfaces due to the diamond content. 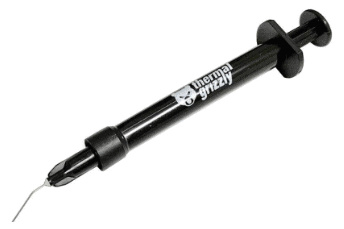 The Conductonaut is the best out there, period. It’s designed for the most extreme enthusiasts.

This can lower your temperatures by over 10°C compared to other pastes. For example, there’s a 7°C difference compared to using NT-H1 paste for an i9 chip with AIO cooling at load. It’s also 4°C cooler than the Kryonaut.

This behemoth is definitely not to be trifled with though; application requires extreme care, as the liquid is like mercury and can easily dribble over, wreaking havoc on your system since its metallic. We highly recommend masking your motherboard beforehand.

It also can’t be used on aluminum heatsinks, which it reacts with, causing serious damage. Nickel-plated heat sinks are fine, and copper-plated ones are mostly fine, though there will be staining aesthetic-wise.

Saying that, it comes loaded with tools and clear instructions to make the process as easy as possible. Clean the heatsink with isopropyl alcohol, then apply a tiny amount and spread it with the provided cotton swabs.

It’s extremely expensive gram for gram, however since its a liquid you need less of it, with 1g tubes being the tube of choice. So in practical terms, I’d argue it’s not far from the Kryonaut.

Coollaboratory Liquid Ultra – another very similar liquid-metal paste, though older and not as popular. 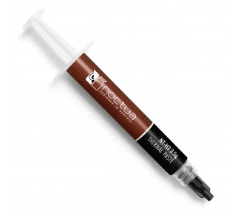 The NT-H2 is a welcome update to the much-lauded and ever-popular NT-H1.

It’s a lot more expensive, however it’s worth it if you’re willing to pay, as it will give you a performance edge, cooling your CPU about 2°C more effectively.

It also just beats the MX-4, but is slightly more expensive than this model too.

Composed of a new blend of metal oxide microparticles, it’s non-conductive with no cure time, and operates from -50 to 200°C.

It’s available in 3.5g or even 10g tubes if you need a lot and want to get more value for money.

It lasts slightly longer than its predecessor; 5 years. This isn’t as good as the MX-4, though, which promises 8 years of use.

It’s gray and easy to apply with a fairly low viscosity of 2.81 g/cm³, and comes with free cleaning wipes (3 with the 3.5g tube, and 10 with the 10g tube). The wipes are of decent quality, tightly-woven felt and include isopropyl alcohol. 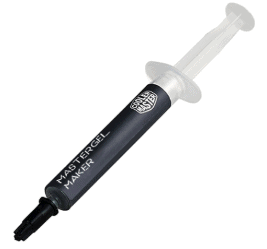 Cooler Master Master Gel Maker Nano is another nice nice mid-range choice. It’s priced between the MX-4 and Kryonaut, and its performance is in between the two as well.

The cool thing about this product is it uses nano-diamond crystals, which help fill microscopic gaps between the processor and cooler. This enables it to achieve a very high thermal conductivity of 11 W/mK, which is close to Kryonaut’s 12.5. Like the Kryonaut, it’s non-conductive.

It’s composition also allows it to operate within a wide range of temperatures, and avoid auto-oxidation or erosion over time.

In testing, the Nano produces temperatures 0.7°C hotter than the Kryonaut, but 0.7°C cooler than the MX-4. Bang in the middle.

Some swear off diamond pastes because of the risk to your surfaces. However, unlike other diamond products, these nano-diamond particles won’t scratch up your surfaces since they are too small, and in Cooler Masters words “non-abrasive”.

Applying it is easy and it’s easy to spread since it has a smooth viscosity of 2.5g/cm³ very similar to the MX-4. It comes in a syringe and with an optional spreader. It also includes a grease cleaner so that you can clean your processor surface first, a nice touch. There’s also no curing time. 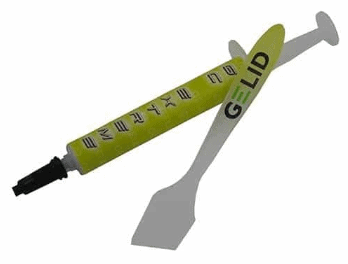 Like the NT-H1, this paste has been around a long time, yet still manages to do very well in benchmarks, beating much newer models.

It’s silicone-based, includes aluminum oxide, and is non-conductive, with a decent operating temperature of -45 to 180°C.

Price-wise, it’s again a mid-range option, and slightly cheaper than the Nano.

However, it’s not the easiest to apply. Whilst a lot more spreadable than its predecessor, the GC-2, it’s definitely not as good as the MX-4, with quite a high density of 3.73g/cm³, similar to the thick Arctic Silver 5.

Also, due to its age, it doesn’t have the latest technology and only lasts 2 years, with some users reporting it wearing out in just 1 year, so you’ll need to keep an eye on it.

Prolimatech PK-3 – similar performance, but not popular and hard to find.

WhichThermal Paste Should I Buy?

Most people will be more than happy with the Arctic MX-4, way better than the old Silver 5. It’s cheap, yet does incredibly well in benchmarks.

It’s non-conductive and can be used on all heatsinks, so it’s suitable for everyone. What’s more, it’s really easy to apply and lasts a staggering 8 years. We couldn’t find any downsides.

If money is tight, the Noctua NT-H1 is slightly cheaper and still an excellent option, coming in just behind the MX-4 performance-wise. It’s an oldie but goodie, a hybrid paste that’s stood the test of time.

However, if you want to spend a bit more and go mid-range, the newer model Noctua NT-H2 is our paste of choice. There’s also the Cooler Master Master Gel Maker Nano, made of nano-diamond particles, and the GELID Solutions GC-Extreme.

Extreme overclockers willing to spend big should go for either the Thermal Grizzly Conductonaut or Kryonaut. The Kryonaut is the top-performing non-conductive paste available, period.

The Conductonaut is a monster with 6 times more thermal conductivity than the Kryonaut. However, be warned it’s liquid-metal, so it’s conductive, hard to apply, and can’t be used on aluminum heatsinks.