Looking for the right motherboard for your coveted Ryzen 3000 chip? An X570 is a pretty good bet, with something for everyone at a wide range of budgets, from the basics all the way up to liquid-cooling and Thunderbolt 3.

Here are five of the best X570 motherboards to choose from, along with the best budget option.

X570 motherboards all include the AM4 socket, which supports the much-acclaimed AMD Ryzen 3000 processors with new Zen2 architecture.

But handily, it’s also backwards-compatible with the Ryzen 2000 chips too.

Overall it’s a mid-range option designed for semi-enthusiast gamers, overclockers and creators with mid-range parts to add, but there’s a huge spectrum of models on offer here, from less than $200 all the way up to $1000. 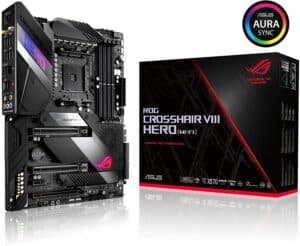 This is a superb high-end board, perfect for overclockers and gamers looking for robust power, tons of overclocking features and unmatched connectivity.

It’s a subtle design, typical all-black except for a gray steel diagonal stripe. The RGBs across this stripe are tastefully done, but if you want an all-out lightshow, you can use the RGB headers and control them with Aura Sync software.

Power is robust, with 16 IR3555 PowIRstages handling 60 amps each, and two large heatsinks covering it, which keep it running cool even during overclocking. The chipset is also actively-cooled by another heatsink.

This motherboard is designed for overclocking, with buttons to reset or flash the BIOS.

The BIOS is heavily-featured, especially on overclocking, and easy to use, with an EZ and Advanced mode for different levels of user knowledge. There’s even a handy Favorites section to make your most-used features quick-access. This board also includes voltage read points, a rare but very useful feature for seeing how it handles overclocking (which of course, it does superbly).

And if you’re looking to take advantage of the X570’s PCl 4.0 compatibility, this might be the board for you. It has 64GBps M.2 Key-M slots that support a PCI Express Gen4 x4 connection. Of course, these M.2 slots have their own heatsinks too.

Wifi is in the name, and it’s definitely premium in this model, with Wifi 6 integration. The network adaptor is Intel Wi-Fi 6 AX200, which supports the new 802.11ax wireless standard, transfers up to 2.4Gbps.

There’s also two RJ-45 ports, one connected to Realtek RTL8125-CG, which is ridiculously fast but not so mainstream. Luckily, the other port is connected to mainstream Intel i211AT Gigabit NIC.

In terms of audio, it comes with a SupremeFX S1220 audio codec.This is similar to the mainstream high-end Realtek ALC1220 audio codec most X570 motherboards have.

It adds in a ESS ES9023P headset amp to boost the audio signal, a nice touch. 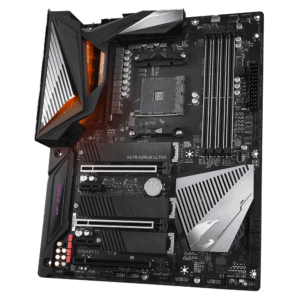 A very popular mid-range model from Gigabyte, and with good reason. It’s feature-packed, including a ton of useful ports, Wifi 6 and premium audio.

As per usual, this is one stylish Gigabyte board. It’s mostly black, however there is some gray in there too to mix things up a bit. The chipset heatsink shroud has a nice aluminium finish, and plenty of slots have attractive Ultra Durable PCIe and memory armor.

The RGB is very nicely done in our opinion, not too heavy but very pleasing to the eye. It lights up the audio section, including the Aorus logo, and also the left VRM heatsink shroud. There are a few extra headers if you desire.

Connectivity is aplenty, including a USB 3.2 Gen 2 Type-C port, six SATA ports and three PCIe slots. Two of these PCle slots are reinforced and support a x16 or x8/x8 setup, perfect for SLI or Crossfire configuration. The third PCle isn’t reinforced and is only x4.

Four reinforced DIMM slots come with double-sided locking. These have up to 128GB DDR RAM capacity with speeds up to 4,400MHz.

As a bonus there’s also a flash button, an unexpected 2-pin header to use the temperature sensor, and debug LEDs to pinpoint any boot issues. All amazing at this price point.

Also, the audio codec is a premium Realtek ALC1220-VB.

Cooling is excellent, with heatsinks everywhere, including two for the VRMs, as well as, incredibly, three heatsinks for each of the M.2 slots, plus on the chipset with a small fan.

This fan is very quiet and even comes with three modes: silent, balanced and performance.

The VRM heatsinks are interesting. They’re connected by a heatpipe, which Gigabyte says is in direct contact with the VRM ICs, which lowers MOSFET temperatures by a significant 30%.

These heatsinks also use a fin array design which apparently increases the heat dissipation area by 300%.

In testing, it does seem to be able to handle fairly powerful chips well. It’s also extremely efficient, over 12% more than competitors, most of which are more expensive.

The BIOS has two modes and is well-organized. There’s also a variety of software to make your life easier like App Center, @Bios and Easy Tune for easy overclocking.

Sadly, the ethernet lets it down slightly at only 1G, instead of the usual 2.5G.

And it comes with a weird, small PCB that has a power and reset button, which you have to plug into the front header.

But overall this motherboard has plenty enough features for the average user, and at such a reasonable price. 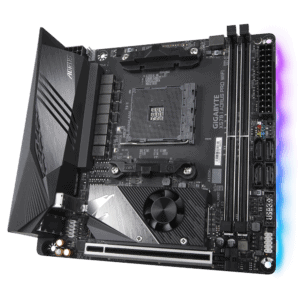 A great all-rounder mini-ITX board that manages to pack more than average into such a compact model.

It even manages two M.2 slots. However, one of the M.2 slots is stacked on the chipset heatsink. This isn’t ideal but then again, no other ITX board has managed to include two M.2 slots.

Like most, it’s a neutral jet black all over, except for a nice brushed-aluminum finish on the heatsink. A base plate increases rigidity.

There’s a fair amount of RGB on the right-hand side, controllable via RGB Fusion 2.0 software. If that’s not enough for you, you can make use of the extra RGB headers.

Power delivery is strong, with a true 8-phase VRM using an Infineon IR35201 8-phase (6+2) controller. This means the board can handle some heavy-duty overclocking, making it suitable for gamers.

The two DIMM slots support up to 64GB of DDR4 RAM and a 4,400MHz overclock. This isn’t the highest, but clocking over 3,600MHz doesn’t do that much anyway. They have a single-sided locking mechanism and are also armored with Gigabyte’s Ultra Durable PCIe and Memory Armor.

Some slots are reinforced with armor, such as the PCle and DIMM slots.

There’s two fan headers so you can add additional fans, and control them through the BIOS, or using Smart Fan 5 software.

The BIOS has an Easy and Advanced mode, with a nice layout and plenty of overclocking options in the Tweaker section under Advanced.

Gaming at 4k was impressive. With an Asus RTX 2070 GPU, Ashes of the Singularity: Escalation reached 101fps at 1080p, and incredibly 101.9fps at 4k. Efficiency was also 7% higher than the competition, such as the AS Rock 570 Phantom Gaming ITX and the Asus TUF X570-Plus WiFi.

Overall, there’s very little to dislike about this ITX. It’s strong in all areas with great power, efficiency, overclocking, and plenty of ports. The only thing missing is a Thunderbolt 3 port. 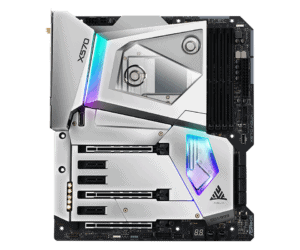 If you want to go elite and money is no object, the ASRock X570 is our model of choice.

You get a monoblock for custom liquid cooling, a staggering AQC107 10Gb Ethernet connection and of course, Thunderbolt 3, in the form of a JHL7540 40Gbps controller. There’s even a pass-through connector for Thunderbolt video.

It’s one attractive board too, well-coated in aluminium for a change. The custom monoblock also has a mirror finish, except for the CPU interface which cleverly has a fine grain to make the thermal paste stick better.

It’s one powerful motherboard with a true 14-phase power delivery.

There’s also a flashback button and plenty of fan and RGB headers, with PWM and voltage-based control possible.

The BIOS, perhaps unsurprisingly, has no easy mode. The Tweaker menu has all you need for overclocking, and you can save your preferences for quick access later.

There are also tools to overwrite your SSD, flash your board, and control your RGB.

It’s excellent at overclocking your CPU, and gives a 3% edge in memory bandwidth compared to competitors. 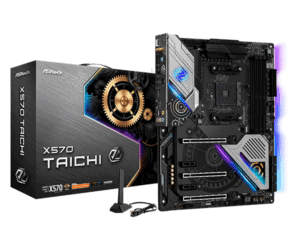 Another great low to mid-range choice, the ASRock Taichi offers great value with a 14-phase power delivery, Wifi 6 in the form of 802.11ax, and three M.2 slots.

We really like the looks of this one since it’s more unique than most with a black and gray design and hints of gold. Still neutral to match most builds, yet a bit more interesting.

And if you’re unimpressed with some of the other motherboards skimping on lighting, the Taichi has you covered. There’s three RGB zones on the chipsets and rear IO, as well as down the right side.

A premium aluminium shroud also covers and makes direct contact with the M.2s and chipset heatsinks for better cooling.

Headers near the CPU socket make it ideal for pairing with AMD’s Wraith Prism RGB cooler, included with many Ryzen 3000’s.

There’s no dual BIOS switch or onboard voltage monitoring points. However, there are power, reset, clear CMOS buttons, and debug LEDs.

Shadow of the Tomb Raider reaches 137fps at 1080p and a fairly impressive 95fps at 4k, and overall results were similar to the similar Aorus Master.

Overclocking is great and also dead easy, but it’s definitely not the most power efficient model.

The fan was also rather noisy at default settings, but this can be turned down manually. 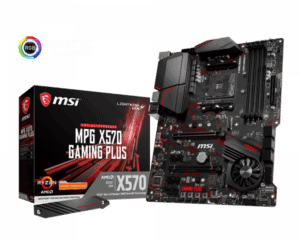 Where it stands out is the voltage regulator, with eight 46A MOSFETs, which is an improvement on other budget competitors. The audio codec is also ALC1220, which is commonly seen on models at $200+

So what can this handle? Well, it should be able to handle all the Ryzen 3000 chips, although pairing a high-end chip with this motherboard would be unlikely. As for standard mid-range chips, it can comfortably overclock them, which is all you should need.

Full PCle 4.0 support is still included with one PCIe 4.0 x4 slots, and two PCIe 4.0 x4 / SATA slots. As such, you could even add a second card in x4 mode via a CrossFire solution.

You can even flash the firmware at the press of a button.

Gigabit Ethernet is via a Realtek controller.

The BIOS still has EZ and Advanced modes and can be overclocked. All fan headers can be controlled in detail via PWM or voltage.

It’s not the most efficient budget model, though, measuring several percentage points less than competitors.