Can’t wait to get your hands on the latest motherboard? Or are you just ready to pair that i9 with a motherboard that can do it justice? Read on to explore the top five Z390 motherboards for a range of sizes and budgets.

Z390 motherboards are designed to handle Intel’s latest chips, the 9th generation Coffee Lake processors, or i9s. Released at the end of 2018, they’re one of the most powerful motherboards out there at the moment.

If you’ve got an i5 or i7 chip, you might be better off with its predecessor, the Z370. 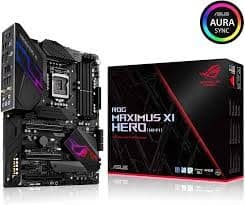 The Asus ROG is an overclocking and efficiency hero, beating even the similar Taichi Ultimate.

It opts for a tasteful black styling with grey elements on the heatsinks. Subtle RGB is located on the PCH heatsink and IO shield.

Lots of high-end features are incorporated, as you would expect at this price point, including two PCIe x16 slots that support x8/x8 SLI, heat spreaders on the two M.2 SSDs, and a BIOS Flashback button. This enables you to upgrade firmware more easily.

There’s four USB 3.1 Gen2 ports, including one USB Type-C, along with two Gen1 and two USB 2.0 Ports for a keyboard and mouse. In addition, there’s a 1.4b HDMI and 1.2 DisplayPort.

There’s also power and reset buttons at the front, and a handy status code display with status LEDs.

A retry button and MemOK II switch makes it easier to boot with overclocking or memory errors.

Substantial headers are well-balanced across the board, including two 4-pin and two 5V addressable, and a Water Flow header.

An Asus Node header lets you add accessories that interact with the firmware from certain third-parties.

The VRM is designed to handle extreme overclocking, with a whopping 10 phases, eight of which are allocated to the CPU.

The Extreme Tweaker feature in the firmware includes a wealth of beginner and advanced overclocking settings, pushing an i9-900K up to 4.95 GHz.

The VRM heatsink is superior to the Aorus Master, with a flattened heatpipe.

It has the lowest CPU and VRM temperatures against similar rivals in default mode, just 44°C for the CPU and 16°C for the VRM. This beats the ASRock Taichi Ultimate, Gigabyte Aorus Master and Phantom Gaming 9.

Games aren’t affected by the power limits of the CPU. Ashes of the Singularity: Escalation reaches a maximum average of 54.1fps on 1080p when overclocked, whilst Deus Ex: Mankind Divided reaches up to 101.9fps.

Overall just excellent and feature-packed, with no downside except the price. 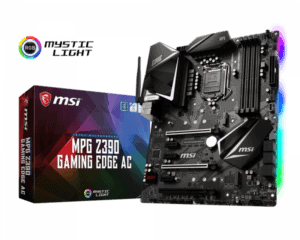 This is a great little micro-ATX board for those who like things on the smaller side.

The aesthetics are neutral, we like the layout of the RGB headers, and the addition of 1.73Gb/s Wifi is a nice touch.

Audio is a solid ALC1220 codec, with an extra amplifier producing good results.

The heatsinks are also decent, and it makes the most of the restricted space, with the metal bit of the heatsink on the voltage regulator covering the IO shield.

Seven headers can work with both PWM and DC fans, a nice touch.

There’s one USB 3.1 type-C, cleverly situated above the top slot so it won’t be blocked by any expansion cards. There’s also one USB 3.1 type-A, two USB 3.0 and two 2.0. However, one of the USB 3.0 ports may be blocked if the graphics cooler is too big.

An extremely odd decision is the inclusion of two PS/2 ports, instead of the usual one, which isn’t needed by many in the first place. We’d much prefer more USB ports, as there’s only five in total on the rear IO.

There’s two RGB LED headers on the top (including one Corsair-only), and two next to the audio, including one addressable. Mystic Light software offers an incredible 28 lighting options.

The space between slots is an issue here, which isn’t surprising at micro-ATX level. It means you can’t use two cards if they’re more than two slots thick.

It can handle dual-card setups if they’re thin enough, though.

The software is the same as the ATX model; MSI Dragon Center and Mystic Light are just tweaked slightly, with plenty of tweaking on memory overclocking allowed.

Power consumption was up to 185W, not the most efficient compared to competitors.

Overall if slot space isn’t an issue for you, then the Gaming Edge AC represents great value for money.

The VRM cooling can’t handle an i9-9900K at heavy loads, and why would you buy an i9-9900 if you don’t want to overclock it? So this motherboard is best for those packing i7 or i5s. 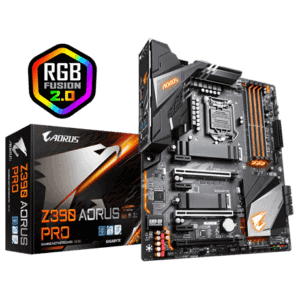 A cost-effective model yet well-built motherboard from Gigabyte with some nice touches.

Like most, Gigabyte have opted for a safe neutral design, but it’s more attractive than most, and the RGB is very classy.

A normal and addressable RGB LED header are located both in the top right and bottom right area of the motherboard, a nice subtle layout.

Eight fan headers are all hybrids that can accommodate DC or PWM.

Both an 8-pin or 4-pin power connector are located in the top right-hand corner.

The rear is bare except for one USB 2.0 slot.

Audio is decent, with a Realtek ALC1220 codec rated up to 120dB. This is the same as used in the much more expensive Aorus Master model.

In addition, a PCB and some decent WIMA and Gold series capacitors help improve audio quality.

The BIOS has a better, updated look, though it’s still definitely not the sleekest-looking around. Overclocking is pretty straightforward and yields average results.

The 50A DrMOS and VRM heatsink with a direct-touch heatpipe makes all the difference. Thermal performance on the VRM was excellent for the price. It’s only slightly hotter than much more expensive models, such as the Aorus Master.

Overall we like the VRM temperatures, USB 3.1 Gen 2 port, eight fan headers, and external temperature sensors. It’s just a shame there’s no Wifi and particularly no 2.5 Gigabit Realtek chip for Ethernet, but sacrifices have to be made at this budget.

If you’re after Wifi, Gigabyte has a more expensive Aorus Pro Wifi model, but the price jump is significant. 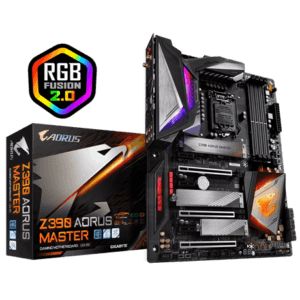 The Master model is a high-end option for those looking for a powerful match for their i9 chip.

The board has a stylish angular design, and adds a few silver accents to the default black and grey color scheme. The RGB is perhaps a little too understated, only on the rear IO shroud and the bottom-left.

Cooling is a prime focus for the Master model.

Cooling on the VRM is masterful, with a heatsink consisting of two finned arrays connected by a direct-contact heatpipe.

On top of that, there’s seven 4-pin fan headers and two thermal sensors.

You also get a rare three PCIe 3.0 M.2 slots, which can be used together and all are of course covered by thermal pads. Two of these support up to 110mm-length drives.

The second M.2 slot is situated below your graphics card, which may lead to airflow issues.

Unsurprisingly it draws a lot of power, with a maximum power draw of 212W.

Shadow of the Tomb Raider reaches 135fps at 1080p, and Ashes of the Singularity reaches 106.9fps.

Four reinforced DIMM slots support up to 128GB of DDR4 memory, capable of up to 4.4GHz.

There’s also a dual-BIOS switch, power, reset and CMOS buttons, and even a debug LED, all great for troubleshooting.

USB connectivity comes aplenty, with one USB 3.2 Gen 2 Type-C, one 3.2 Gen 2 Type A, two USB 3.2 Gen 1, and two USB 2.0 slots. There’s also one HDMI, but the DisplayPort and DVI have been unceremoniously dumped.

Realtek ALC1220 is a standard audio codec, bolstered with an ESS SABRE9118 DAC, and some Nichicon Fine Gold and WIMA capacitors.

Overall there’s little to dislike about this board aside from the price, which will be prohibitive to some. 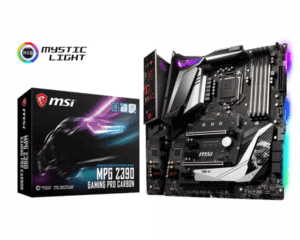 It’s got an 11-phase power delivery design, five doubled phases for the CPU and one for the graphics.

It’s increased the number of USB 3.1 Gen2 slots from its predecessor, the Z370.

The M.2 slots have a new heat spreader design, to compensate for the lower slot being near the graphics card.

Layout has been very well thought-out. For example, the six SATA slots and one USB 3.0 on the front are cleverly located to allow cards longer than the board. And two of the x16-length slots have ample spacing to maximise airflow between coolers.

It scores low points for efficiency, and is less efficient than the much more powerful Aorus Master, drawing up to a crazy 321W.

It reached 104.6fps for Ashes of the Singularity and 146fps for Shadow of the Tomb Raider.

The audio codec is the standard Realtek ALC1220, with Nichicon capacitors.

The VRM heatsink is well-covered, with a max temp of 43°C. Only one of the M.2 slots is covered by a heatsink, though.

We like the CPU overclocking, VRM temperatures and SLI and CrossFire support, but the downsides are inefficiency, poor memory overclocking and lack of wifi.

There’s no arguing that the ASUS ROG series has done it again, producing a spectacular, feature-packed motherboard.

It pairs well with the most powerful chip, the i9 9900K, and beats similarly-priced competitors in almost all tests.

Plus it’s sleek, neutral aesthetics means it can appeal to masses, with plenty of premium features and headers to personalise your setup.

Those after a more budget option can’t go wrong with the well-rounded Gigabyte Aorus Pro.