The BitFenix Pandora is a sleek and sexy aluminum-clad microATX tower with a refreshing design. It has the ambition and look of a high performance case but its dimensions prevent it from being a true powerhouse.

The BitFenix Pandora is a breath of fresh air compared to most tower cases. It’s somewhat on the petite side, being a microATX chassis with a narrow 16.0 cm wide body that barely accommodates a full-sized ATX power supply. Like more and more cases these days, the Pandora has no 5.25 inch bays, tossing them aside in favor of a gorgeous sculpted curved front with brush aluminum side panels draped around it. There’s more aluminum rounding out the back as well and not a single screw is visible anywhere on the exterior. The panels simply pull off in a similar fashion to the NCASE M1 and SilverStone Fortress FT03.

The case is a fingerprint magnet, though, and the grain on the panels to be rather coarse. After initial cursory examination, I noticed a strange fine powder accumulating on the surface. I was the source of this material, as the aluminum had scraped against my hands leaving behind particulate and a metallic odor on my skin. Inside, it supports up to 3 x 2.5 inch and 2 x 3.5 inch drives, but it lacks a dedicated drive cage; the drive placements are scattered in various locations.

There are two 120 mm fans included, one at the top and one at the front, with a second fan placement sitting unoccupied behind the front bezel. The Pandora can accommodate video cards up to 35 cm in length, and the presence of an extra expansion slot suggests that a dual video card configuration wouldn’t be out of place. However, as the case is narrow, CPU coolers are limited to 13.4 cm in height, though you can use liquid cooling with a 12/24 cm radiator mounted at the front. It has the look and ambition of a high-end performance case but its dimensions may be the limiting factor.

The Pandora is available in black and silver, with or without window, and costs around US$100, while a more basic version, the Pandora Core, sells for US$90. The only difference is the Pandora sports a small 2.4 inch LCD at the front used to display the BitFenix logo. The panel is connected via USB and BitFenix provides software to display any 240 x 320 image of your choosing. If you dislike shiny/novel things, the cheaper Core model has an embossed logo instead.

The Pandora ships with a few accessories including a short assembly guide, a few zip-ties, and two thick velcro straps. Thrown in with the screws are some rubber grommets for drive installation, a thumbnut for tightening standoffs, and an Allen key as expansion cards are secured with hex thumbscrews.

As the top and front of the chassis are basically just rails for supporting fans and drives, so there isn’t much heft if you strip away all the aluminum. What little steel resides underneath is sufficiently sturdy with no obvious weak points or sharp edges.

The assembly process is simple and straightforward and most of the issues are with regard to space and wiring. The chassis’ narrow body limits the choice of both CPU cooler and graphics card, and the restrictive space behind the motherboard tray you want to leave some of the thicker cables on the top side.

For our baseline noise tests, the system is left idle, the CPU fan is set to just 400 RPM, and the GPU fans are set to minimum speed (1060 RPM) by default. The system fans are connected to controllable fan headers and are set to a variety of speeds using SpeedFan. This gives us a good idea of what the stock fans sound like in actual use at different speeds with minimal interference from other sources.

The system fans have a nominal speed of just 1000 RPM, and as there are only two included, they produce very little noise compared to most tower cases. The noise they add to the system is not measurable below about 60% speed (~640 RPM) so there is no point running the fans any slower than this. At top speed, the system generates just 22 dBA@1m, so it’s likely that the internal components will drown out these fans in the load tests. 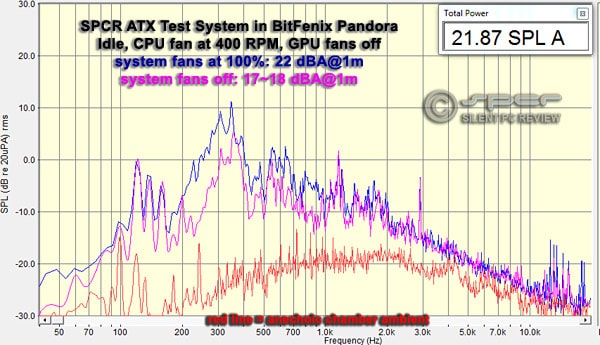 The quality of the noise emitted by the stock fans is pretty good. They produce an innocuous, soft, white-noise type sound with a distinct lack of tonality, even at full speed. The case also deals with hard drive noise fairly well as only faint vibrations can be felt on the side panels when the machine is powered up — the 3.5 inch drive mounting design does a better job of isolation than most cases. The bottom position is preferable to the top as it’s easier to hear the drive working through the top cover.

Our usual hardware setup includes a larger CPU heatsink, the Scythe Mugen Max, with its fan spinning at a modest 800 RPM. So far this has been sufficient to adequately cool the processor, even on full synthetic load, in all of our recently reviewed ATX tower cases. The smaller top-down Noctua cooler used to accommodate the Pandora’s narrow physique isn’t quite up to the task when the system is fully taxed. Even with the system fans and CPU fan at full speed, the processor hits close to 70°C, at which point it begins to throttle. The system can handle the heat produced by the chip itself, but the additional thermal load from the GTX 970 is too much. However, keep in mind this is a far more demanding test than any combination of real applications you can throw at it.

The Resident Evil 6 Demo Benchmark is a more realistic gaming stress test, and at its peak load, the CPU fan can be slowed to 1000 RPM while maintaining a slightly lower and stable CPU temperature. It’s fairly balmy inside as the motherboard temperature sensor eclipses the 50°C mark and the SSHD, sitting in relative comfort on the case floor away from all the action, warms up to just under 40°C. 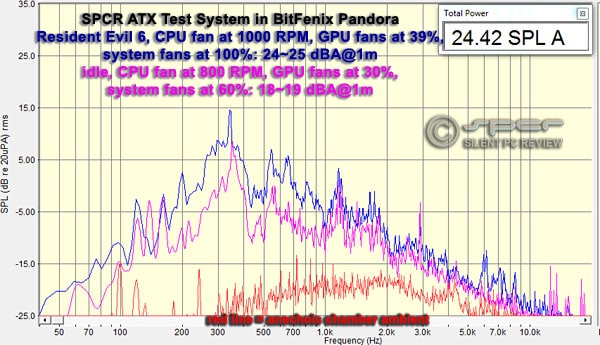 The noise level with these settings is 24~25 dBA@1m which is reasonably quiet for a gaming rig, and the acoustic profile is fairly smooth and benign.

The BitFenix Pandora is the best looking microATX tower to come through SPCR. Brush aluminum panels that pop off have been done before but the Pandora takes it one step further with its curved front edges. This gives it a snazzy profile and also serves to hide the substantially sized intake vents, helping minimize the noise directed toward the user from within. The black top filter and front bezel accent the silver nicely and the small display is a nifty addition that is also customizable. The latter is sure to draw the attention of enthusiasts, though the quality of the LCD is subpar due to inadequate viewing angles.

Inside, the 3.5 inch drive placements are most impressive. The Pandora can accommodate two such drives, one on the ceiling and one on the floor, and both locations are relatively effective at limiting drive vibration. The case fans have a nice sound, though they probably run too slow for most users. Unfortunately, cooling is not this case’s strong suit despite its fairly open airflow design. The width of the chassis restricts the CPU heatsink height to 134 mm and the single 120 mm exhaust fan has difficulty expelling hot air out of the case. This is perhaps one scenario where a AIO cooling unit may come in handy as it could direct heat generated by the CPU out through the front of the case and out of the heat path of the video card.

Cable management is probably the biggest annoyance. A few zip-ties and velcro straps don’t make up for the lack of space behind the motherboard tray. The foam lining the top filter is the most aggravating misstep; its presence goes against all common sense. Beyond that, all that’s left are some nitpicks like the weak feeling power/reset buttons, hex thumbscrews securing the expansion slots, and the coarse grain of the side panels.

The BitFenix Pandora is a beautiful small tower case with refreshing design. The smallish size hampers cooling but it’s so elegant that it may be justifiable for form to trump function. Users who use the most demanding components won’t like it, but it should satisfy the majority. I would like to see a wider, full-size ATX version of this case with a large rear exhaust fan and space for bigger components as there’s no reason to limit its inventive design to this particular form factor. For an aluminum clad chassis, its street price of US$100 seems reasonable but if you want to save $10, look at the Pandora Core, the same case minus the front display.

Our thanks to BitFenix
for the Pandora case sample.

The BitFenix Pandora is Recommended by SPCR