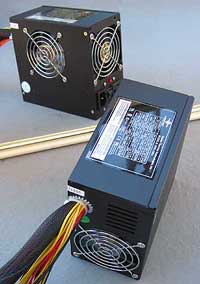 We don’t usually do previews, but the Vantec rep was so insistent on a quick review that I felt compelled to give her what wanted, at least on a small scale. So here is SPCRs first preview, being written less than an hour after its delivery by UPS, and only half an hour after first powering it up on the testbench.
The accompanying photo was taken with the Vantec VAN420A in front of a mirror so that you can see it really does have three 80mm fans.