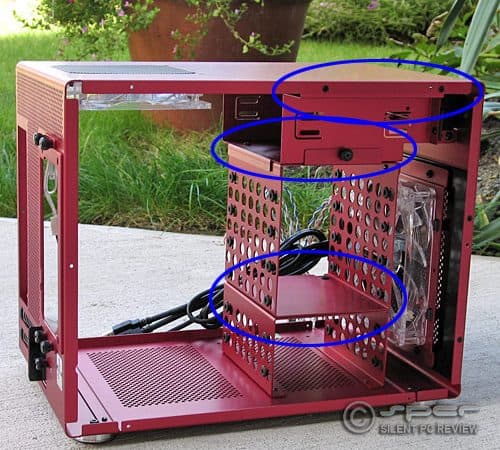 Putting it all together, with some simple mods for improved noise and vibration.

Extensive details about the internals of the case as well as assembly can be found in our Lian Li PC-Q08 review. It’s a rather straight forward process and the enclosure has a few features that make it more convenient than a typical case.

The less than sturdy hard drive situation in the Lian Li PC-Q08 is easily our biggest complaint about an otherwise competent case. The bottom hard drive cage is fairly solid thanks to gravity and being secured with four screws to the case floor, but the main four-bay cage above it hangs on using only a single thumbscrew. The optical drive section is screwed in from the sides, but this is only possible because the frame has been bent. Since the frame isn’t a straight rectangle, it doesn’t have as much structural integrity and thus is quite malleable. It also relies on the loose cage underneath it for stability.

These three problem areas all work together to amply vibrations generated by the hard drives. The slight differences in the rotational speed of hard drives, even of the same model, creates intermodulation which causes the case to resonate, sounding like an unending rhythmic pulse. This behavior was encountered when we tested the case with multiple drives and only went away when we pressed the side panels inward with our hands. Rather than clamping the side panels or drive bays together, we applied some simple and easily reversable modifications to deal with this issue.

To steady the main drive cage, a versatile, cheap, and easy to find material was adhered to the top and bottom of the main drive cage: cardboard. A small piece of cardboard folded in half was enough to increase the height of the cage and thus create a tighter fit. Long strips of electrical tape were used to stick it on so that the edges of the cardboard would not catch an edge and come off. The result is so snug that one must reach into the case and pull from the other side to get the cage out, so some convenience was sacrificed for the sake of silence.

To brace the optical drive bay, we simply folded up some paper and packed it between it and the ceiling.

If you listen closely you will hear the unmodified system pulsing like it has its own shallow heartbeat. After our modifications, it smooths out into an almost completely stagnant hum. In our anechoic chamber, no resonance was audible unless we stood very close to the machine.

The Zotac board we chose supports fan control for one PWM fan, and the behavior can be adjusted in the BIOS. However given that a typical home server doesn’t get placed on heavy load often we opted to choose a manual, static setting that will keep the fan speed at an appropriately quiet level for our needs (usually at ~800 RPM).

The PCQ-08 has a pair of system fans that run faster than we would like. We will be connecting them to a 3-pin Y adapter so that they can be controlled manually using a Zalman Fan Mate, a well-known and simple device that can vary the voltage supplied from 5V to 11V. For safety purposes we will power the Fanmate using a molex connector (via a 3-pin to 4-pin molex adapter) as we have had some experience in the past with motherboard fan headers burning out with more than one fan connected.