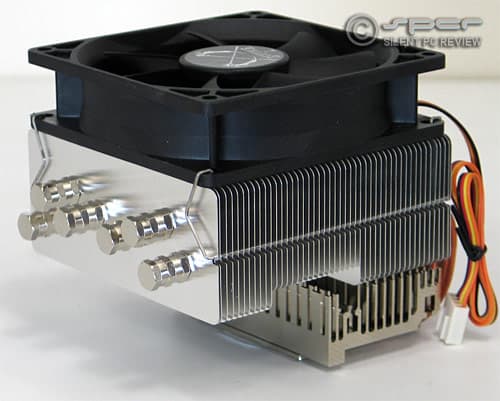 CPU heatsink/fan choices, and tallying up the budget for the SFF Home Server Build.

With approximately 110 mm of clearance between the processor and the power supply above it inside the Lian Li PC-Q08, the Samurai ZZ is a lock as the CPU heatsink. Of the coolers we’ve tested that can physically fit in our chosen setup, the Samurai ZZ is the best performing and has a high quality stock fan. The ZZ also offers cross compatibility with AMD and LGA775 motherboards if that’s your preference.

The total cost for our server came out to over US$1,200 but there are a few places we could have skimped without much impact on system performance. If we had opted for a Pentium G6950 processor, 2GB of RAM instead of 4GB, and a Nexus Value 430W power supply, the total price would’ve been shaved down to US$1150 (US$490 without any drives).

A four drive build based on the Intel DG45FC would have lowered the cost to approximately US$845. In comparison, a pre-built WHS box from a manufacturer like HP equipped with a single 1TB retails for around $500~550. Bringing the total capacity up to 8TB would put the cost up a little over our SFF home server, but that would be the current capacity limit with all four of its drive bays filled.