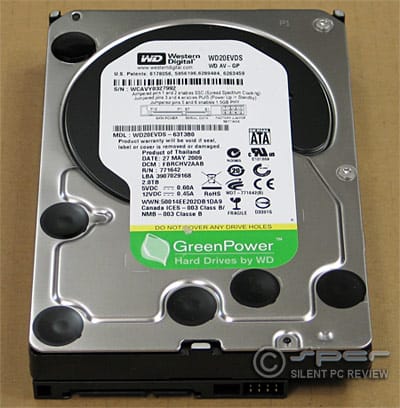 For storage we chose six Caviar Green 2TB drives from Western Digital’s AV-GP series which are optimized for video streaming and have head-parking disabled. (Editor’s Note: FYI, despite the anxiety of some users, there is absolutely no evidence that high head park counts — seen in SMART data — in WD Green Power drives leads to premature failure.) The drives are from older 2009 stock and have similar acoustics to a WD20EADS we reviewed last year but half of the samples vibrate less, scoring higher on our subjective scale.

The latest three-platter Samsung EcoGreen F4 2TB would be a good alternative as it more or less matches the noise and vibration levels of older four-platter Caviar Greens, but WD’s new three-platter revisions of the 2TB GP may be superior. Try the SPCR/Pricegrabber Shopping Engine to help you find the best deal on the right hard drive.

Given the low load activity for a typical home server, sharing files, streaming video, and performing backups, not a whole lot of computing power is necessary. In fact, many pre-built WHS boxes run perfectly well with Intel Atom CPUs as long as you only use its basic functions. However, higher-end NAS boxes utilize dual-core higher-clocked Celerons and Pentiums, which are far more powerful than any Atom processors. Our choice, the Core i3-530, is the second slowest model available for the LGA1156 socket and probably higher performance than the processor in any retail NAS box.

The i3-350 has a TDP of 73W vs. the i5-661’s 87W, but both CPUs use about the same amount of energy when idle. There was a 12W power consumption difference on load at stock voltage, and a 9W gap when undervolted by 0.10V. Try the SPCR/Pricegrabber Shopping Engine to help you find the best deal on the right CPU.

Most home users can get away with 2GB or even 1GB of system memory, but again, like CPU power, it really depends on what you do. WHS uses very little RAM on its own, but throw in a bunch of add-ins and its memory usage will go up. The various flavors of linux popular in NASes and home servers are also very light in this regard.