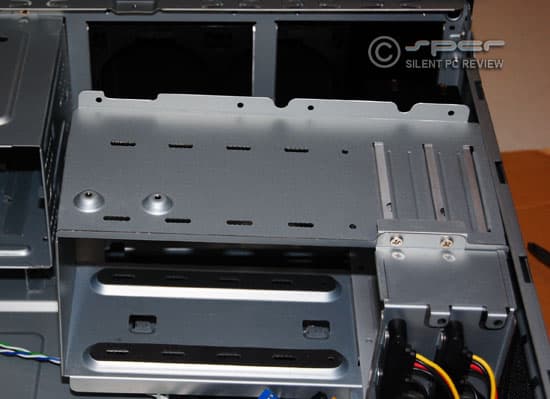 Assemby of the system began with removal of the HDD cage and mounting of all the drives. Five of the WD Greens were installed in the main section. The sixth WD Green was mounted in one of the hot-swap bays; an OCZ Vertex 30GB SATA II SSD for the operating system went into the second hot-swap bay.

Windows 7 was installed onto the SSD. With the cover in place and the front doors closed, the system was left running in idle for a while before testing.

One question loomed: With the front bezel so closed, would the WD drives overheat? In all the other cases we used for server boxes thus far, there have been generously sized vents at the front, close to the hard drives.

The answer came with a quick glance at HDD temperatures using Lavalys EVEREST PC diagnostics software after the system had been sitting mostly in idle and doing Windows updates. They were running too hot, with the hottest one at nearly 60°C and the coolest at 52°C. The ambient temperature in the anechoic chamber was 24°C. In summer, the drives would cook. Back to the drawing board.