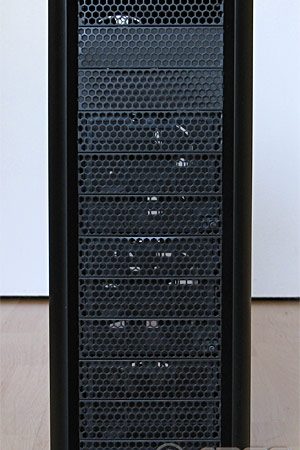 Our Silent Home Server Build Guide continues with configurations using a mid-tower case and an ATX motherboard for even higher storage capacity with the same ultra-low noise objective. Includes a detailed how-to on creating a multiple elastic cord suspension system to reduce noise from 6, 9 or 12 HDDs.

We stated early on that the most common home servers are actually rescued old PCs, often just running a copy of Window XP (but sometimes with a fresh install of a better OS) and serving as a glorified network attached storage. These PCs are typically in mid-tower ATX format, which has the benefit of the broadest, deepest, and cheapest range of supported hardware in the PC universe. It is also the choice of many a savvy power user (read: geek) — it is cheap, old parts can be easily reused, and they are very familiar with it. It is also easy to run very quietly, with very good cooling. All good reasons. About the only real downside is that it is big, typically 40~50 liters in volume.

What about building one from scratch? That’s simple enough. Aside from good cooling and the ability to use large slow spinning fans, the biggest advantage of mid-tower and larger ATX cases from an acoustic point of view is that they often have room to elastically suspend multiple hard drives. Long time readers of SPCR need no introduction of the concept of mechanically decoupling the hard drives from the case, as it has been standard practise here for virtually the entire 8+ years of our presence on the web. For those who are encountering it for the first time, here’s the most salient section from our Recommended Hard Drives reference article:

“The noise of a disc drive mounted in a case comes in two forms:

“1. Airborne acoustics is what all drive manufacturers currently specify as the HDD noise. It is the sound that comes from the drive through the air to the observer. This value is measured with the drive suspended in space by wires.
“2. Structure-borne acoustics induced by the drive’s vibration during idle and seek is not quantified by HDD makers. This vibrational energy is transmitted to the PC chassis and causes the chassis to act much like a sounding board.”

Structure-borne acoustics is the dominant source of HDD-induced PC noise. Nearly a decade ago, Seagate’s testing showed that changes in airborne drive acoustics had little effect on the overall system acoustics when drives were hard mounted in the chassis. With the near universal adoption of Fluid dynamic bearings and lower platter numbers due to increased areal density, vibration in HDD has been lowered, but it is still a major component of HDD noise. Hence, the dramatic noise reduction with most HDDs evident with decoupled mountings such as the NoVibes, SPCR’s elastic suspension, or simply placing the drive on soft foam. The noise emitted by even drives with very quiet stand-alone performance is affected by how it is mounted to a chassis. There is a still-active 7-year forum thread on the effectiveness of various HDD decoupled mounting techniques, and a similarly long-lived, 400+ post thread on how-I-suspended-my-drive.

There are many cases that offer soft rubber grommets to help reduce the mechanical coupling between HDD and chassis, but very few that have the more effective, true elastic suspension like the NoVibes or the hundreds of DIY variants. The only cases with elastic suspension that are widely available and still in production are the Antec P150, Solo, Sonata Plus 550 or Sonata Designer 500 — all of which are variants of the same basic case. But this Antec case allows suspension of just three HDDs, and we’re looking to suspend at least six; ideally, 10 or more.

We will have to make a multi-drive suspension ourselves, as no such case exists. It is a simple task requiring just a few meters of clothing elastic and a case with a 5.25″ drive bay that extends from the top to the bottom of the case. There are quite a few cases that have this feature. Here is a short, not comprehensive list of such cases in alphabetical order:

Find great deals on the right components with SPCR/Pricegrabber