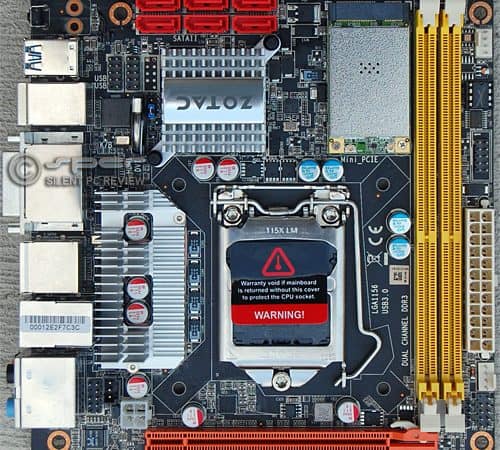 Criteria and choices of mini-ITX boards for the SFF Home Server.

The Zotac H55-ITX-C-E is our chosen motherboard simply because of its six SATA and one eSATA port, a total of seven SATA ports, which is unmatched by any other mini-ITX motherboard on the market. It also has a 16x PCI-E slot for a discrete higher performance video card or further SATA port expansion if necessary, a mini PCI-E slot (if the included WiFi module is not used), and a fan header with a decent level of PWM customization in the BIOS.

The only downside is its relatively high power consumption; our sample board feeds a higher core voltage processors than other boards. The CPU can be undervolted by 0.10V in the BIOS, however, which alleviates the problem a little. We know this is not the most energy efficient or affordable solution (the cheapest LGA1156 processor costs about US$100), but in almost every other way, the Zotac H55-ITX-C-E suits our purposes.

The table above lists some possible alternatives with gigabit ethernet, more than three SATA ports, and a PCI-E expansion slot for an optional SATA controller card to expand storage. For the LGA1156 socket, there are a couple of cheaper alternatives to the Zotac H55-ITX from Gigabyte and Intel, but they only have four SATA ports. Try the SPCR/Pricegrabber Shopping Engine to help you get the best deal on the right mini-ITX board.

To give you a better idea of what you can expect with other boards/platforms, we wrangled up a few mini-ITX boards that may be suitable alternatives and briefly checked them for power consumption, undervolting capability and fan control.

Like the Intel DH55TC, the DH57JG is supremely energy efficient especially when idle, using a lot less power than H55 boards from other manufacters. Unless you opt for an embedded CPU/motherboard (e.g. Atom), there is simply nothing that can match it. Even paired with a 87W Core i5-661, the DH57JG pulled only 29W from the wall with our standard motherboard test setup. There are no undervolting or fan control options in the BIOS, but it does manage both fan headers automatically. If you run a Windows operating system, SpeedFan can give you custom control.

The Gigabyte H55N-USB3 seems to offer the best bang-for-your-buck amongst the current crop of LGA1156 mini-ITX boards. It’s priced at only US$105, yet sports USB 3.0 in addition to the usual features and has plenty of undervolting ability. Its power consumption is middle of the road at both idle and load, much better than the Zotac H55-ITX, but much worse than the Intel DH57JG. It has a single PWM fan header that can control both 3-pin and 4-pin fans, but the curve can’t be adjusted in the BIOS — the only fan control option available is an on/off toggle. If you prefer to have some say in how the fan speed behaves, SpeedFan offers full PWM and voltage control.

If you don’t mind some older hardware, the Intel DG45FC is a solid budget choice. It’s more costly compared to say the Gigabyte GA-H55N-USB3, but LGA775 has the advantage of cheaper processors with singe core Celerons starting at about US$40 and dual cores models at only $10 more. Most home users won’t need a lot of horsepower in their server, so the only thing you will likely miss out on compared to the DH57JG is a power savings of about 10W when idle. The board has only basic options in the BIOS for adjust the fan control; there are no target temperature or minimum/maximum fan speed settings, but SpeedFan can be utilized for full control.

The J&W’s Minix 890GX-USB3 is the only modern AM3 mini-ITX board we could get a hold of. While AMD boards are usually cheaper than comparable Intel boards, the Minix is a premium product that is expected to retail for close to US$200 and like the Zotac H55-ITX, its power consumption isn’t great even with a standard low-end dual core processor. The board’s BIOS allows you to undervolt up to -0.30V and it has plenty of fan control options but the current version of SpeedFan doesn’t work with it. Aside from the price, our biggest complaint is the constant coil whine emenating from our sample during operation — a brutal weakness for a desktop system, less so for a server — but as usual, it’s impossible to know whether is this a sample-specific problem or endemic to the breed.

Use the SPCR/Pricegrabber Shopping Engine to help you get the best deal on the right mini-ITX board.