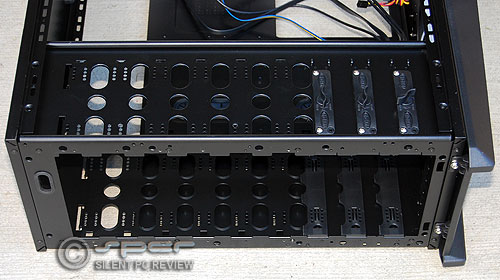 Details about the selection of other components for the mid-tower home server, and modding the Tempest EVO for HDD elastic suspension mounting.

As for the rest of the components, quiet ATX power supplies have been long studied and documented here, as have quiet CPU coolers, and fans. Just check out the pertinent articles in the Recommended Section for details. Given the sheer number of HDDs we’re dealing with, a modular PSU is a practical option. Among them, the Seasonic X-series (and the Corsair AX series) is king, with 90% efficiency, super low noise and all completely detachable cables. That leaves just the motherboard, CPU and RAM. In reality, just about any modern multiple-core processor, supporting board and RAM will do. For our build, we chose solid products that we’ve already reviewed. Here’s the build roster, with links to our reviews or product pages.

Notes about the Components

The Gigabyte 890GPA-UD3H ATX motherboard is well equipped; its only real limitation being 8 SATA ports. There are a very few boards with 10 SATA ports or more, but we simply could not afford the time to hunt for them and then get them to the lab. Eight HDDs would have to do; one more would be installed and powered up (for noise measurements) but not hooked up to the motherboard. It is also possible to choose a motherboard with the features you seek, then add a PCIe SATA expansion card. Keep in mind that high performance PICe SATA cards are not cheap, however.

The Athlon II X2 255 AM3 processor should provide high enough performance for any home server, with dual cores at 3.1 GHz and 2MB cache. A 45W TDP processor might have been a better choice, but because the CPU is so unlikely to be pegged in a home server, the additional cost (and slower speed) of a lower TDP part was deemed unnecessary.

We always find low voltage RAM to be very useful in low-power silent PC builds, as reliability is ensured even when components are undervolted. The OCZ RAM worked well.

The Seasonic X-650 is overkill in terms of total available power, as the CPU and motherboard will probably never draw over 90W, but the startup power spike of nine drives could exceed 200W (even if only momentarily)… and if a gaming video card is ever installed it will add >100W, so the extra power is not such a bad thing. Besides, the price difference between this and the next model down (Seasonic X-560) is trivial, and efficiency is extremely high even when overall power draw is well under 100W.

The WD GP 2TB are the same parts used in the SFF server, but since we posted that article, the WD 3TB models has been launched. The latter is still around $250, so it’s not exactly a bargain compared to the 2TB’s $100 price. Just wait a few months (or even weeks) and that 3TB is sure to come down in price, especially as other brands launch competing drives.

The Noctua NH-C12P cooler we used is the old one with 12cm fan which we reviewed quite some time ago. It has been replaced by a similar one with a 14cm fan, the price for which is cited. This is not great value, actually, as there are tower coolers at half the price with at least as good cooling performance. Many of those listed in our Recommended Heatsinks article are certainly good alternatives. In any case, the Noctua provides perfectly good enough cooling for our application. We were motivated to use this cooler for another reason: It fits much more easily into a smaller horizontal style HTPC case; that is the next configuration planned for this server build guide.

Our modifications to the NZXT Tempest EVO case for HDD suspension can be applied to just about any case with an extended optical drive cage. It begins with stripping out everything from the ODD cage that could interfere with the rigging of the suspension. Then, you need a spool of sturdy clothing elastic (available from any sewing shop), a sharp pair of scissors, possibly some plastic wire ties, and maybe a lighter, which can be useful in "cauterizing" frayed ends of the elastic, if necessary. Finally, some patience and time.

This suspension mod of nine pairs of elastic cord loops (one in front, one nearer the back) for nine HDDs took a little over an hour… but we have had a lot of practice. It might take you longer. Only existing holes were used, and in a few instances where space was very tight, plastic wire ties were used to anchor the ends.

If this server was going to be used long term, we would have drilled more holes on the sides of the drive cage so that three or even four loops could be used for each drive. This reduces the stress and strain on the elastic cord, which can wear (though it rarely every breaks due to the outside fabric mesh). It’s also wise to check the elastic periodically (say every half year) for wear and tear.