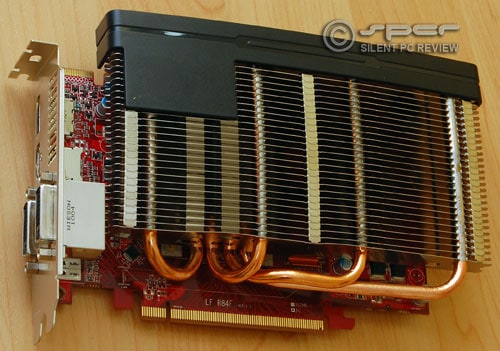 A HD5770 card with a stock cooling solution proved to be far too noisy for our taste, so we tried a passively cooled HD5750 with a simple silent fan mod. Success! Part of the Home Server Build Guide.

The second card we tried was a PowerColor Go! Green Radeon AX5750 1GB, a passively cooled version of the next model down in the Radeon HD lineup.

Dropped into the SFF system with the case fans at 6V, exactly as they were without any discrete video card, the AX5750 increased the idle power by about 10W, to ~80W AC. When pressed hard with Prime95 + Furmark, the temperatures of both the video card and the CPU rose up a bit too high for comfort unless the case fans were turned up to 8V or higher, which then made the system a bit too loud for our goals.

Given the fairly large gap between the card and the bottom of the case, there was some room for a slim fan. A Scythe Slipstream Slim 120x12mm low profile fan was pulled into service in a quick and simple mod.

This is more like it. With the GPU fan set to a fixed 5V, and virtually no changes to any of the other fans, the overall SPL of the system did not change. Nor the subjective perceived noise; the Sycthe fan really is inaudible at this low speed. The cooling was very effective, however, keeping the GPU to a mere 75°C.

The primary costs are a drop in the maximum number of hard drives (from six down to four), an increase in power consumption of about 10W at idle, and if you play games hard, the system will pull over 200W at peaks. In monetary terms, the cost of the video card + fan and even an external fan controller is more than offset by the elimination of the two WD GP drives; this setup is actually cheaper… except of course for the extravagance of the Intel SSD, which you could forgo by using a partition in one of the WD GP drives for the OS.

The Radeon HD5750 is not likely to be a favored card among "serious" gamers, but it provides good enough performance for casual players who don’t demand all the eye candy while blitzing at 100fps. If you want higher performance, we think it is possible to run a 5770 with a similar cooler (like the aforementioned Gigabyte GV-R577SL-1GD) in exactly same configuration, perhaps the only compromise being a slight increase in the speed of the fan you attach to the cooler.

We should note that as a home file server or media streaming box, Windows 7 Pro 64-bit and WHS are hard to differentiate in actual use with this hardware. File transfer speeds were very similar if not identical to that found with the WHS installation, and streaming of HD video worked the same as well. We’re not saying a Win7 PC is as secure as a separate headless server setup, but for file serving or media streaming functions, it works pretty similarly to WHS. Remote desktop can be used easily to access the Win7 SFF Gamer/File Server, if necessary, although not being headless, the system could easily be your main rig. With a well-fitted piece of close-cell foam under it and placed behind your big flat monitor, this Lian Li PC-Q08 setup could be just about invisible and inaudible on your desk.