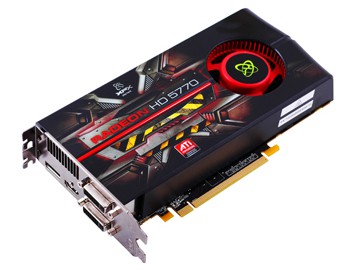 The Silent SFF Home Server we showed you how to build has lots of thermal headroom and room enough to accommodate a 2+ slot video card, so we tried some discrete PCIe graphics cards and Windows 7. Can we keep the SPL to 20 dBA@1m?

The surprisingly high thermal headroom of the SFF home server we built encouraged us to try installing Windows 7 and discrete video cards so that it could play the role of a gaming machine as well as a basic file server. The biggest compromises entailed in this multi-role PC is the loss of WHS Drive Extender techology, lowered maximum storage capacity (only four HDDs instead of six), more wear and tear, and greater risk of data corruption. If the hardware is perfectly stable and adequately cooled even under the high stress of gaming, these are not serious compromises. But gaming will tend to expose any underlying weaknesses or instabilities in the system more than just about any other application you can run on your computer. Anything that causes crashes or blue screens, including game software bugs, have the potential to cause data loss.

Accepting these potential risks, we considered video card options for our SFF server. The bottom drive cage and the two drives mounted within would have to come out, as any decent gaming video card would extend into that space. Top performance cards such as the ATI HD5800 series or the nVidia 480 series were barred without serious consideration. The cooling requirements just seemed too great for the little Lian Li case.

Looking further down scale, the ATI HD5770 appeared to be a good choice, given its 108W maximum Thermal Design Power (cited by AMD and confirmed by independent reviewers) and modest 18W idle power. The fanless Gigabyte GV-R577SL-1GD was our first choice; alas, no samples were available in time, and no retailers had stock. We settled on an XFX Radeon HD 5770 (1GB DDR5), one of many 5770s that use the stock ATI cooling solution.

Windows 7 Pro 64-bit was installed in an Intel X25-M 80GB solid state drive for this build. The main reason for using a separate drive was to minimize wear and tear on any of the data storage drives. An 80GB partition is plenty big enough for the vast majority of OS + applications, even if you are are serious gamer, and the SSD provides a nice boost to the startup speed of any application. The SSD was mounted in the optical drive cage with a single screw holding it in place. The SSD is so light and runs so cool (barely a watt) that little more is rarely needed.

Four WD GreenPower 2TB drives remained in the main hard drive cage as before. A bit of thin cardboard was added as a tightening spacer atop the bottom C-bracket that supports the HDD cage, to help minimize vibrational effects. For the same reason, a small piece of close-cell foam was also wedged into the C-bracket to make it push up a bit against the HDD cage. (You can see the foam piece in the photo below.)

The same CoolerMaster Silent Pro 700W PSU was used as before, and the same Zotac H55-ITX-C-E motherboard. Only five SATA ports were used, so the six SATA ports of the Zotac were not quite as crucial as before. Still, there are no other mini-ITX boards with five SATA ports, and only a couple with four SATA ports and an eSATA port that could be used as a SATA port.

This configuration proved to be unusable right from the start, at idle. The overall SPL was a not-too-bad 25~27 dBA@1m, but the fan of the stock cooler in the HD5770 had a nasty signature, tonal in both mid and higher frequencies, along with some buzzing. The overall power draw at full CPU + GPU load reached a little over 240W AC. Under such load, the overall SPL jumped well over 30 dBA@1m, with a nasty sonic character completely unacceptable for a system meant to be silent. Increasing the speed of the case fans had little effect on the video card cooler fan, and only served to increase overall noise even further. We quickly pulled the video card from the system and moved on.