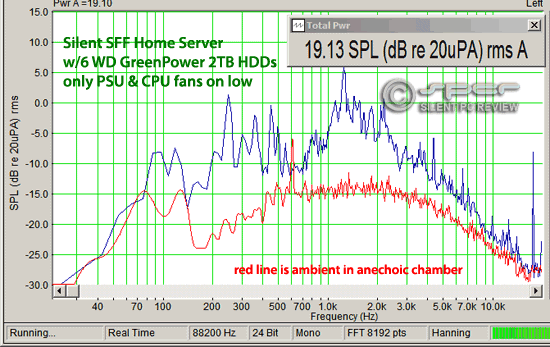 Detailed outcome of the acoustic, thermal, power and use test results of the SFF Home Server. Part of our Home Server Build Guide.

FROM THE ANECHOIC CHAMBER

Noise – During operation, our six-drive SFF server build was very quiet, measuring only 20 dBA@1m. This was with the server sitting atop our standard wood-top office table. There is usually some amplication of vibration and noise due to the table top acting like a sounding board, so we tried slipping a 1" thick piece of common closed-cell foam (used originally as packing for a case) beneath the server. The mechanical decoupling effect of the foam was audible immediately as a general reduction of noise, mostly lower frequency, but also higher up in the range. The measured SPL drop was 2 dBA. As expected, the PSU fan never sped up, and it was not identifiable as a discrete noise source.

Power & Temperature – Despite using a relatively power hungry motherboard, the system only pulled 71W from the wall, a few watts more when streaming video, and 10 watts extra when performing large file transfers. The front 140 mm fan, running at just 6V, was enough to keep the drives under 45°C throughout testing. The CPU temperature also never eclipsed 40°C. The load on the CPU occasionally reached 100% on some multi-taking operations, but rarely for longer than a few moments. Typical WHS operations kept CPU utilization well under 50%.

These thermal results are very reassuring, indicating some 15°C of thermal headroom, assuming you wish to keep the HDD no hotter than 55°C. That means safe operation in >35°C ambient temperature.

Media Streaming – This is a function affected by so many different factors, including the OS on the participating PCs, and all the various hardware, including the network, so it is not a test of the server, per se. But it was interesting to see what could be done.

A 40GB MKV copy of a pretty much uncompressed 1080p Bluray movie Avatar was streamed for viewing on a PC in the network. The same movie was streamed to a second PC, and a third. We found that all three video streams were free of glitches in either video or audio. When a file transfer on yet another computer was initiated to/from the server, glitches and stutters occured in all three playback streams, however. Two different movies streamed to two different PC simultaneously suffered no problems, but again a file transfer to/from the server caused some hiccups. CD quality audio could be streamed from several different files on the server to several different PCs without any problems. The interruption caused by file transfer to/from server was less, and less consistent with streaming audio files; sometimes none, sometimes a bit of a glitch.

Effect of the Number of HDDs – Much of the impressively quiet performance can be attributed directly to the sterling acoustic properties of the Western Digital Green Power hard drives. It’s hard to imagine any other stack of six HDDs measuring just 18 dBA@1m. To explore the acoustic summing effect, we tried listening and measuring SPL with different numbers of WD GP drives. Removing a single drive, so that the total number of active drives was five, resulted in virtually no difference in perceived or measured noise. With two drives removed, the SPL@1m dropped by only 1 dBA, a barely noticeable difference. When just three drives were running, the difference was a total drop of 2 dBA, which is a surprisingly small improvement and less than the theoretical 3 dB difference expected. (Editor’s Note: The A-weighting probably had an impact due to the relatively high proportion of lower frequencies in the total SPL of the HDD. In effect, our system with three hard drives on a wooden table was acoustically indistinguishable from the same system with six hard drives, but sitting on foam. The latter, in some subtle way, may actually be more benign to hear, perhaps because it is slightly less tonal in the lower frequency range.

Network Speed – In our gigabit network with three switches and over a dozen devices, the maximum file transfer speed was 110 MB/s, writing or reading. The speed was affected a bit by the hardware at the other end, by the number of switches the transfer passed through, and by the operating system of the other PC. Windows 7 PCs were the only ones that consistently reached 100 MB/s in file transfers from/to the server. Windows XP machines generally fared worse, sometimes just 30~40 mb/s. Vista machines generally fell between XP and Windows 7.

Another important aspect of achieving the fastest nework speed was the ethernet cable. Initial inconsistent result forced us to examine every cable in the network. All cables were of types that support gigabit speed — Category 5e and CAT6, yet when replaced with others of the same type, a few were found to have limited the speed to 100mbps, instead of 1000mbps. Sometime even flipping a cable allowed the speed to bump up, from 100mbps to 1000. One particular cable which WHS and Windows 7 both reported as being megabit allowed file transfer speed of only ~75 MB/s when other identically spec’d, similar length cables achived over 100MB/s.

After an entire afternoon of experimentation with ethernet cables and ensuring similar >100MB/s maximum file transfer speed through every length of cable in the network, we came to the following practical conclusions:

Let’s summarize the six-HDD SFF home server system we have detailed above:

Given the thermal and sonic headroom, we decided that it was worthwhile exploring the possibility of using this plaform not just as a WHS box but a general purpose Windows 7 PC, one equipped with a discrete video card suitable for gaming but with massive shared storage capacity accessible on the network. Such a system would lose the nifty Drive Extender features of WHS, and unless you implement some form of JBOD, the single automatically formatted storage volume of the combined drives would not be possible. But each drive could be assigned and named for a unique function, such as VIDEO, MUSIC, PHOTOS — much the way WHS provides default folder for such. The real challenge for us was how powerful a video card we could cool adequately and still keep the system quiet enough. This will come in a few days… in the next installment of the SFF Home Server Build Guide.