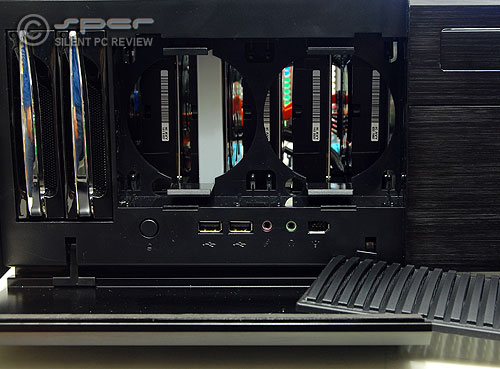 HDD cooling required the installation of two 80mm fans. What impact do they have on noise and cooling?

The simplest and quickest solution to cool the HDDs is to add fans in the front of the Silverstone GD03 case. But as mentioned earlier, the front door over the intake vent is meant to be closed normally, and once the door is closed, there’s virtually no way the fans can pull any outside air into the case. Surely this would not be effective. Was it worth a try? Well, why not. The system was already fully built in the case.

A quick search for decent 80x25mm fans led us to a big box of 80mm Panaflo fans that were once the finest quiet fans in computing. The brand is history, and there are substantially smoother, quieter fans around today. However, 80mm fans are out of favor these days and we did not have two identical newer 80mm fans on hand, so the old Panaflos would have to do.

The grill over the intake fans was clipped back on, the front door closed, and the PC powered up again. At full speed, the panaflos added quite a bit of noise, but of course, it was not our intent to keep the fans running that high. Instead, fan voltage was reduced to 5V, then the system was allowed to sit idle in Windows for quite some time. Three hours later, we came back to have a look, listen and take some measurements.

The HDDs basically ran 10°C cooler with the Panaflo 80mm fans running slowly in front of them, even with the intake air access pretty much closed. At 42~50°C, the temperature range is acceptable; HDDs are generally rated for safe operation to 60°C. Still, keep in mind this is in a room of 24°C ambient.

What would happen if the hinged door in front of the fans was left open? Temps drop substantially again, while noise goes up by 2 dBA@1m. There is no significant change to CPU temperature; it dropped around 2°C Here’s a quick summary of drive temperature under the different cooling schemes.

The HDDs temperatures are lowest with the two 80mm fans on at a very low speed, with the front door open. The overall noise is 21 dBA@1m, which is still extremely quiet compared to typical PCs. Some years ago, it would have been a low noise champ at SPCR (if fanless PCS are ignored). Keeping that door open allows not only the fan noise but also the noise of the hard drives to be more audible. With the door closed, the noise drops, but the temps go up. In winter in a temperate zone, this would be perfectly acceptable… but in summer, the HDDs would probably run a bit too hot for comfort.

Finding a HTPC case with the capacity to hold a large number of drives and with airflow design good enough to keep them cool turned out to be quite a challenge. The Silverstone GD-03 can hold seven HDDs, which is more than any other HTPC case we know of, and with the addition of a couple of 80mm fans, it can keep the HDDs reasonably cool except in very hot weather. A smaller number of drives would probably stay a bit cooler, but simply removing the front door or leaving it open in the summer is also a solution for cooling. For now, in appears that a tower style case like the ones mentioned in the Mid-Tower Home Server Configurations portion of this build guide is the best, most cost-effective housing for a silent home server.