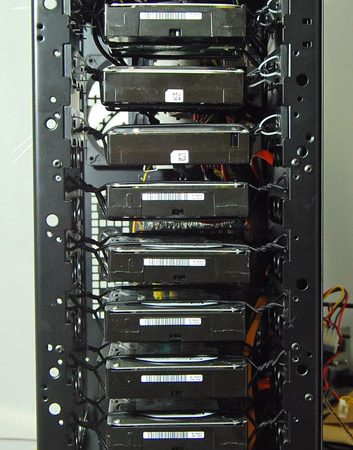 Nine drives suspended in any case is quite a sight.

The motherboard, CPU, CPU heatsink/fan, and RAM were all installed in the case before the elastics and HDDs were installed. The Seasonic X-650 power supply came next. It was a relief not to deal with attached cables with so many drives to hook up. Cable management was still not easy, but it would have been much more tedious with cables permanently attached to the PSU. Each set of cables had to be carefully "dressed" so that the tension and stiffness in the cable would not move the HDDs out of ideal position.

Only two fans were set up to run — the Nexus 120 on the CPU cooler and the stock fan on the back panel of the Tempest EVO case. That stock 120mm fan proved to be quite smooth and quiet. It ran quietly enough at reduced speed that with the combined noise of all the drives, it would not be an audible factor.

We did not think either of the top panel case fans were needed. The top fan vents were blocked off by simply placing a couple of small notebooks on the top grill (on the outside of the case). This effectively stopped any air flow through the top. Ordinary packing tape was used to block off most of the other vents on the back panel as well as the fan on the side panel. All this was to ensure that most of the air pulled by the single back case fan would come from the front, and provide some cooling for all those hard drives. (Naturally, the use of packing tape for vent-blocking is only for temporary testing; appropriately-colored cardboard, plastic or closed cell foam sheets are preferred for more permanent vent blocking.)

Windows Home Server was installed on one of the nine WD Green drives, updates and drivers loaded. The system was run for a couple of hours afterwards to ensure complete stability before embarking on any testing. (As mentioned before, one of the drives was powered up but could not be connected to the motherboard as it has only eight SATA ports.) Then we took the system into the anechoic chamber and put it through its paces in the same way as we did with the SFF file server configuration.

The numbers were hard to believe at first. Less than 19 dBA@1m from a computer system with nine hard drives! That’s a maximum storage capacity of 27 TB with 3 TB drives. The increase in system power draw was around 10W compared to the 6-HDD SFF build. We decided at this point to pull a couple of drives out to make a direct comparison to the SFF file server.

The differences in CPU temperatures (in the table above) can be dismissed; they are completely different processors… but it’s interesting to note both are similarly low, so cooling is more than adequate for both CPUs. HDD temps in the two systems are close enough to be considered the same, as are the power consumption numbers. We’d guess that the Gigabyte 890GPA-UD3H + Athlon II 255 probably draw more power than the Zotac + i3-530 in the SFF box, but the difference is compensated by the higher efficiency of the Seasonic X-650 power supply.

There were no significant differences in network access speed between this build and the earlier mini-ITX SFF build. File transfer speed peaked around 100 MB/s on both, with lows being 30~40 MB/s. The same caveats apply with regard to ethernet cables.

Measured noise is over 3 dBA quieter for the bigger box. This is because there is one more fan in the front of the SFF box, and the suspension mod in the mid-tower reduces HDD noise. The tower box with nine HDDs is slightly quieter than the SFF box with 6 HDDs. (Note that when placed on a 1" thick closed-cell pad, the SFF box noise dropped to 18 dBA; this trick does nothing for the elastic suspended HDD mid-tower because there are no vibrations in the case to be damped.)

Both SFF and the mid-tower systems can be extremely quiet with six HDDs, especially the latter with elastic suspension for the HDDs and the former with a foam pad beneath it. But the mid-tower system can accommodate 50% greater number of drives and still remains well under 20 dBA@1m. If you need/want the higher storage and you’re willing to find room for another standard size PC, our build shows you how it can be done without any noise penalty.