Member Ken Sakuma reviews the noise reduction effect of “Brown Bread” panel dampening material on a PC system that is already carefully tweaked for low noise. The review answers questions not only about BB but other similar materials such as Dynamat.

This article examines the noise reduction effect of Brown Bread panel dampening material on a PC system that has already been carefully tweaked for low noise. Ken answers questions people have had about Brown Bread other similar materials such as Dynamat.

Even with a processor that runs cool without a whining fan, most PCs still make some noise. I’ve found my hard drive is nearly impossible to silence, even though it is the quiet Seagate Barracuda IV. For most people, well chosen parts and quiet fans are good enough, but if nothing but complete silence will do, it’s an ongoing battle and every weapon is worth a try.

One source of noise is the case itself, which often amplifies vibrations from fans and drives. I became aware that this might be a problem in my system and began seeking solutions. Someone on a forum mentioned Dynamat, a popular sound deadening material. Their website states, that it is a “premium engineered sound control material” used to reduce noise. Applied in thin mat-sized pieces, it is most often used in automobiles to reduce outside noise and help improve the sound of the stereo, but Dynamat can also be used to reduce PC noise.

Dynamat is expensive – about $7 per ft². I would need at least 8 ft² to comfortably line the inside of my PC. I was not ready to pay $56 for a product I wasn’t positive would work, and there were complaints that Dynamat is smelly.

I searched the web for an alternative and found B-Quiet, a lower priced competitor to Dynamat. The price of about $1 / ft got me excited. One web review claimed 8 dB of noise reduction was achieved by lining the inside of a case. Eight dB was good enough for me to try it, but then I saw that they have another more effective product called Brown Bread.

Brown Bread is
described as

A viscoelastic deadener with a supercharged bitumen based adhesive. With an aluminum constraining layer and an unique composition with suspended mineral particles it has been proven to be extremely efficient at the conversion of vibration to thermal energy. Brown Bread is extremely flexible which is very important as it allows it to properly adhere to a contoured panel.

The product page for Brown Bread has a review comparing many different deadening materials, including products from Dynamat. BB comes out on top (surprise surprise!). A higher priced product, Brown Bread is supposed to perform better than B-Quiet. I ordered 70 ft², which cost me about $2.25 / ft². Shipping was free.

UPS delivery took a week. It came in a very large heavy tube. I removed about 8 staples giant heavy tube before I got the top off. According to B-Quiet, BB weighs 0.4lbs per ft². The material looks like a layer of roofing tar affixed to heavy aluminum tin foil. A layer of waxed paper over the tar layer keeps it from getting on everything.

After a quick read of the Application Instructions, I cleared a bit of room, shut down my PC, opened it up and started applying the deadener on the inside panel surfaces. Here are the tools I used:

* I recommend using scissors that you dont mind throwing away as they get very messy.

The computer case is a Lite-On FS020 which I reviewed HERE.

At first, I tried to apply BB alonen but quickly discovered that this is a 2-person job; it is much easier to apply the stuff with some help. Brown Bread gets more flexible when warm, so the hairdryer
can be useful, but it isn’t really necessary.

I applied lots of BB on the bottom of the case and anywhere I could find space. BB is VERY difficult to remove, so plan carefully! I had to scrape off a lot of it using a sharp razor blade, and believe me, it is no fun. Check to make sure the side panels will close before you make the BB permanent! Set aside plenty of time to finish the job. It took me 8 hours to apply 2 layers in every imaginable place I could find. In retrospect, a single layer on just the sides and top would be nearly as good and not add as much weight.

Here is how my side panel looked before: 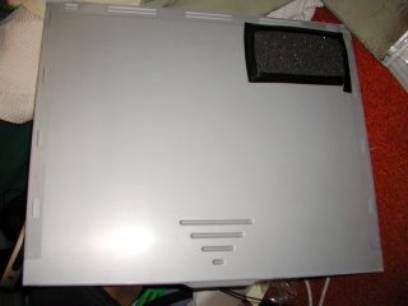 Here is how the sides and top look after applying 2 layers of brown bread: 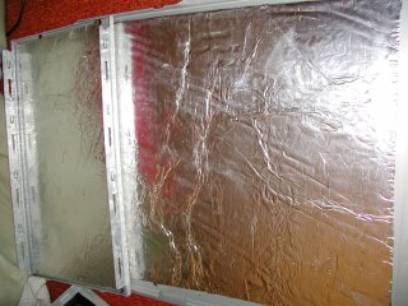 The panels got MUCH heavier ( my case is already heavy to begin with due to its 1 mm thick Nippon SECC steel). Compared to an untreated panel, the treated panels sounds dead, almost like knocking on a piece of wood.

I also applied BB all around the drive cage:

Here is my system:

The ambient temperature during testing was 22C, +/- 1C. Temperatures were recorded off the BIOS after casual browsing and chatting for 30 mins.

I was pleased that Brown Bread did not make my system run hotter.

How Well Does It Reduce Noise?

As I do not have access to a SPL meter, my noise comparisons are based on listening alone. My first impression was that the noise reduction was noticeable, but the difference wasn’t so big that I could be sure my memory (and my desire to hear positive results) was not playing tricks on me. Time to do some controlled listening.

I did all my listening between 11 PM and 1 AM, when ambient noise is fairly low. The main source of noise was an aluminum sandwiched 80G Barracuda hard drive either decoupled by elastic suspension or placed directly on the bottom of my 5.25″ bay:

I took the side off my case and stopped my front intake fan, which is the fan nearest my sandwiched HDD. The rear case and PSU fans are far enough away and spinning slow enough that their noise is insignificant.

I first listened to the sandwiched drive with the side panel off at a distance of about 1 foot. I found the the noise to be quite loud, emitting a sound similar to a refrigerator combined with some airflow whoosh. I could pinpoint the sound as coming from the hard drive. During this test half of the side panel was left on, with only the front half exposed.

Side Panel with and without BB

After testing with the case open, I rigged up a regular untreated metal panel to cover up the open portion of the case. Not surprisingly, there was a significant noise decrease compared to the half-open case. Now, the noise came more from the back of the case. I believe the metal panel provided enough sound blocking so that the sound emerging from the holes in the rear panel became more dominant. Only a slight whirring noise was faintly audible through the metal panel. Any of the higher frequencies I heard coming from the hard drive with the side off was completely inaudible.

I tried covering the side of my case with a 2 x 2 ft piece of 3/4″ MDF to see how it compares. It performed slightly better than the metal panels. The sound coming from the back of the case became slightly more predominant.

I also noticed that the front case bezel allows noise to leak. I tested this by sliding the MDF board in front of the bezel, then away. The noise was reduced significantly with the MDF board. Once again, with the MDF in front, the sound from the back case became more noticeable.

A final test was conducted to see whether BB eliminate the need for hard drive suspension. The answer is no: conventional mounting of the Barracuda drive in the BB-treated drive cage made it a little bit louder, and suspending the drive made the noise a bit quieter.

I also tried an old Seagate Medalist 5400RPM, which is significantly louder than the 80G Barracuda. First, I placed the Medalist in a sandwich and suspended it in a front 5.25″ bay. Afterwards, I mounted it directly to the BB-treated cage in the back of the case. The Medalist was significantly louder when mounted directly. The higher frequencies were more audible, and the top of my case may also have amplified the noise bit.

Brown Bread reduces the susceptibility of case panels to vibrations. Such dampening can reduce noise if there is significant vibration being transmitted from components into the case. In my PC, there was a small audible improvement, but it was not dramatic, because none of the fans are spinning fast enough for vibration to be a big factor, and the hard drive is already aluminum sandwiched and mounted in an elastic suspension to reduce vibration transfer. I suspect a PC less optimized for low noise would benefit more from BB treatment.

I did not compare Brown Bread to other deadening materials such as Power Snooze or Magic Fleece because:

If you are interested in reducing panel vibrations in your PC case, I recommend Brown Bread.

I am starting to think that damping the case to muffle sounds is useless unless the case is completely sealed. This is impractical as the PC would slowly cook with a sealed case. Perhaps a completely sealed aluminum case that uses heat conduction to transfer the heat to the outside would work.

In the end, one has to consider that there are several diiferent types of noise reduction treatments, and each achieves a different purpose:

Blocking noise: the best example is a 12″ thick concrete wall. It stops the noise from getting through by sheer mass and density. It is about the only way to reduce low frequency noise (~200Hz and lower). Thick MDF is another example of a noise blocker.

Absorbing noise: Foam and fiberglass are obvious examples. These materials generally work best with high frequencies, quite well for middle, but are not effective with low frequencies. The molecular physics apparently at work here is that vibrations are converted into heat within the fibrous material.

Reducing vibrations by dampening: This is obviously the category where BB falls, but it is interesting to note that elastic suspension and other decoupled motor mounting techniques have the same objective one step closer to the noise source. BB and other panel dampeners decrease the amount of noise a panel makes when it is subject to vibration. On the other hand, decoupled mounting tries to stop the vibration from reaching the panel in the first place. Many people feel that tackling the noise closer to the source is more effective. In this case, this theory appears to appears to hold.

B-Quiet offers samples for only the cost of shipping. The sampler seem to include BB as well as their other materials. Brown Bread is available in 3 sizes as of this writing: