The Caviar Black is Western Digital’s premium 7200 RPM hard drive. The 1TB model has 3 platters and 32MB of cache putting it in direct competition with the Samsung F1 1TB drive. Which is faster, and more importantly, which is quieter?

What’s black, blue and green all over? Westen Digital Caviar hard drives of
course. Their Green Power line
(aka Caviar Green) was a big hit in terms of power consumption and acoustics.
The Caviar blue offers a mainstream compromise between quiet operation and performance.
The third and final color, black, is reserved for their highest performance
drives. The 1TB model we have in the lab today has only 3 334GB platters, putting
it in direct competition with the Samsung
F1 1TB. However, the WD Black has dual processors and is backed by a 5 year
warranty. Does that give it the edge? 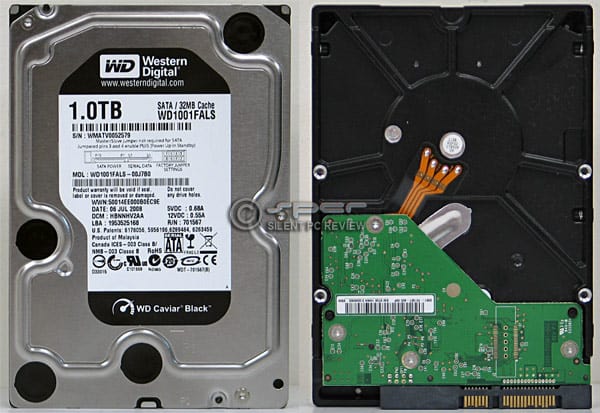 The Caviar Black 1TB is housed in a similar casing to the Caviar Blue 640GB.
Let’s hope it’s enough to keep the noise level down.

Our sample was tested in SPCR’s anechoic
chamber according to our standard
hard drive testing methodology. The test drive sample was compared against
a few other drives. Our methodology focuses specifically on HDD noise, and great
effort is taken to ensure it is comprehensively measured and described. Performance
is covered only lightly, for reasons discussed in detail in the methodology
article. For comprehensive HDD performance testing results, we recommend Storage
Review, who have established a long reputation as the specialist in
this field. The WD1001FALS is in their
performance database in a head-to-head comparison with Samsung’s F1 series.

Ambient conditions at time of testing were 11 dBA and 19°C.

The WD Black 1TB sounded smooth in operation, with similar acoustics to its
Caviar Blue cousin. No unpleasant
tones or whining were noted but the overall noise level of the Caviar Black
was significantly higher both at idle and during seeks. Seeking was particularly
loud at 25 dBA, within spitting distance of the 10,000 RPM 150GB
Raptor. Compared to our selection of newly re-tested reference drives, the
WD Black fared poorly.

The overall sound is broadband, except for the 120Hz fundamental tone of its
motor spinning at 7200 RPM. Without AAM enabled (the default state), seeks had
a slight, audible tonality that we measured at roughly 3.2 kHz. The seek noise
was very sharp — easily audible from a meter away. Turning AAM on improved
the seek noise substantially. The tonal peak faded, and the sound became both
smoother and quieter — very muted at one meter’s distance.

The level of vibration was higher than we’ve come to expect from Western Digital.
The Caviar Black vibrated noticeably more than Caviar
Blue and Samsung F1
750GB drive. It was more or less indistinguishable in this regard to the Caviar
SE16 500GB — a two year old drive with 4 platters. Soft-mounting is
definitely recommended, suspension is preferable.

The power consumption of the drive was quite a bit higher than that listed
in the specifications: 8.5W idle, and about 11W during seek, whether AAM is
enabled or not. The last drive we reviewed that broke 11W was the 150GB Raptor.

We no longer have our sample of Samsung’s F1 terabyte drive (our current 7,200
RPM favorite), so we were unable to re-test it in the anechoic chamber or make
a direct comparison. Our original
review rated it a 5 on our vibration scale, measured power consumption at
about 7W at idle and 10W during seek. It operated at approximately the same
noise level as the 750GB version.

The averge read speed (90.6 MB/s) and maximum burst speed (219 MB/s) of the
Caviar Black were similar to the results obtained for our 640GB
Caviar Blue sample. The random access speed of 13.6ms was a bit higher,
however. These results are a bit disappointing. After all, the Black line
is supposed to be the grand daddy of the Caviar series. The Samsung F1 1TB
had more or less the same read and burst speeds, though it’s random access
speed was almost 3 ms slower. CPU utilization was higher by a few percentage
points.

These results are more or less bourne out by the results
at Storage Review, which gives the Caviar Black a modest lead over the
F1, except in multi-user, server-oriented environments where the Caviar Black
was clearly superior.

Turning on AAM resulted in the exact same read and burst speeds with a 4.5
ms increase in random access time. The reduction in noise level is well worth
it though.

These recordings were made with a high resolution, lab quality digital recording
system inside SPCR’s very own 11 dBA ambient anechoic chamber, then converted
to LAME 128kbps encoded MP3s. We’ve listened long and hard to ensure there is
no audible degradation from the original WAV files to these MP3s. They represent
a quick snapshot of what we heard during the review.

The recording starts with 5 seconds of ambient noise, then 10 second segments
of the drive in the following states: idle, seek with AAM enabled, and seek
with AAM disabled.

The WD Caviar Black 1TB drive is a bigger, louder, and more power
hungry version of the Caviar
Blue 640GB. Performance according to HD Tach was a bit disappointing —
though it has a higher areal density and twice the cache, it didn’t seem to
be any faster. It did beat out the Samsung
F1 1TB drive in random access time. Of the three drives, the Caviar Black
came in last in both acoustics and power consumption. Of course, this is a limited
set of tests, and more extensive comparisons may show a clearer edge in performance.

Automatic Acoustic Management greatly improves the seek noise
of the Caviar Black, but at the cost of random access speed — a price we
think is worth paying. However, even with AAM enabled, audio performance was
not stellar. We also highly recommend suspending the drive as it does vibrate
more than a typical modern 3.5″ drive. It is no doubt, a fast drive, but
the higher noise level is disproportionate to its performance especially when
you consider what Western Digital accomplished in the Velociraptor.
The Velociraptor is an incredibly fast yet quiet drive (once taken out
of its icepack mounting frame). Of course, not everyone is willing to pay the
premium Western Digital charges for the drive.

The Caviar Black is likely one of the fastest 1TB drives on the
market, but the extra performance is incremental as far as we can tell —
an end-user may be hard pressed to perceive any advantage over the closest challenger.
For those with a quiet PC, the increase in noise level over the drive’s we’ve
recommended over the years (such as the Samsung 1TB F1) is much more likely
to be noticed.

Many thanks Western Digital for the review sample.