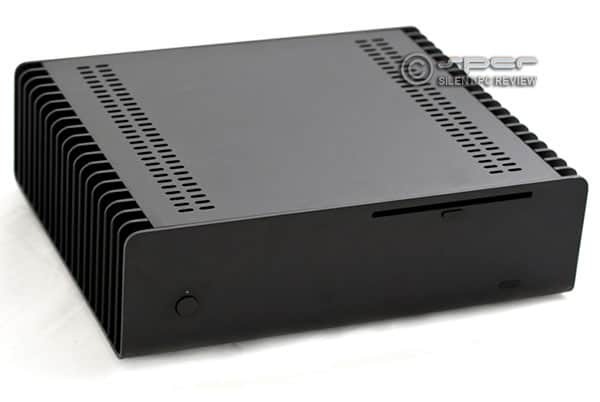 A completely fanless media PC from EndPCNoise runs cool enough in for any real-world applications while emitting no noise at all unless the DVD drive is engaged.

EndPCNoise
was the very first PC vendor to partner with SPCR for certified silent PCs,
going back to the Model Eleven
in 2006. This Washington-state system integrator is a pioneer in silent computing,
and has remained active in the field for a decade. EPCN has produced both fan-cooled
and fanless systems with extremely low noise levels. Their latest submission
for SPCR certification is a fanless Intel Core system with no moving parts except
for an optical drive.

EPCN’s Streacom FC9 Micro ATX Fanless PC is a horizontal desktop style
PC built, naturally, around the fanless Streacom FC9 chassis. We’ve reviewed
several Streacom fanless cases fairly recently (FC8
EVO, for example) so most SPCR should be familiar with this brand. The
Streacom cases feature heatpipes transferring CPU heat to heatsinks that act
as side panels in passive cooling systems. They are designed explicitly for
fanless operation. They are built to a price — while not the most robust
or efficient heatsink cases, they work well enough, look good enough and are
priced modestly enough that they could become the defacto everyman’s silent,
fanless case. The FC9 is one of the several Streacom variants with a big bank
of cooling fins on each side of its fairly low profile chassis.

The design goals for the EPCN Streacom FC9 Micro ATX Fanless PC
are:

Time now to consider the specifications of this fanless PC test sample:

This sample uses components that are a bit older than some of the other options
on the EPCN
Streacom FC9 Micro ATX Fanless PC page. The i3-2120T CPU is now two generations
old, with Ivy Bridge and Haswell (3rd & 4th generation) Intel Core CPUs
having appeared since Sandy Bridge.

The sample unit was prepared in mid-June, and the day that it shipped out to
SPCR was the day that Haswell chips and motherboards first arrived at EPCN.
Rather than delay another couple of weeks to prepare a new system with Haswell
parts, EPCN elected to send the Sandy Bridge sample. The EPCN Streacom FC9 Micro
ATX Fanless PC web page page reflects the new inventory changes, with the new
Asus H87I-PLUS socket 1150 motherboard and two 65W TDP Haswell CPU being the
new options. A system in the Streacom FC9 with the latter CPUs cannot be part
of this SPCR certification, as the TDP of the CPUs is too far above that of
the 35W TDP of the i3-2120T in the test sample.

EPCN reports that their experience so far with the 65W Haswell chips has been
problem free in the Streacom FC9 case, with load temperatures not significantly
higher than that obtained with the 35W Sandy Bridge parts. They are awaiting
delivery of 35W and 45W TDP Haswell parts for systems they intend to submit
for SPCR certification testing. That should be within the next few weeks.

The question in this system is how the thermal test results with a Sandy Bridge
35W TDP CPU compare with higher TDP CPUs. Does the case/cooling system have
enough headroom to handle the higher power/heat of the Haswells? The Haswell
chip has documented as running hotter than previous Core generations, due to
a higher base clock rates and the use of less-than-ideal thermal interface material
(TIM) under the heat spreader which covers the actual die. Another key differences
is that Haswell incorporates a voltage regulator within, integrating as many
as seven external voltage regulators in previous CPUs.

Peter Nickol, Chief System Designer at EPCN, says the integration of the voltage
regulator in the CPU is an advantage in fanless heatsink cases like the FC9.
"The CPU could run hotter as a result of the integrated VR, but the CPU
is always the easiest thing to cool as the case cooling system is optimized
for that. But board-mounted components take a real beating in fanless systems
because of the absence of airflow, which they generally need to stay running
cooler. With the VR off the board, motherboard longevity should improve quite
a bit, especially in low or no airflow cases like the FC9."

In any case, EPCN created a new product page specifically for the SPCR
Certified Silent version of the Streacom FC9 Fanless PC, with order
options limited to Sandy Bridge CPUs. A second sample with Haswell parts is
planned for SPCR certification soon.

The EPCN Streacom FC9 Micro ATX Fanless PC sample arrived in one of EPCN’s
large signature cartons: They pack their goods really well to ensure safe delivery.
The carton was double-boxed, with the inner box cradled in custom-fitted foam
ends for a tight, secure yet cushioned fit.

The case/system is small, about 10 liters in volume and just under 6 kg in
weight, with nothing marring the front fascia except the power button with a
tiny drive activity LED, and a DVD slot with an eject button directly beneath
it. In case you bemoan the absence of front USB ports, not to worry, there are
two USB 3.0 ports hidden (but easy to access) between fins near the front of
the right heatsink. The side heatsink fins are rounded so they don’t pose any
danger during handling. The bottom panel features a long slot beneath each back
of heatsink fins to help with convection airflow, and there are small vent holes
on both top and bottom panel. None of the panels is massively thick (and this
includes the front panel) but they are thick enough to feel sturdy, with no
chance of bending in normal handling.

The interior of the EPCN Streacom FC9 Micro ATX Fanless PC is fairly tidy as
such systems go. The optical drive and SSD are mounted on a hinged tray over
the front of the motherboard. The heatsink on the left side of the photo does
all the work, and the path of the heatpipes between CPU and heatsink is somewhat
convoluted. There’s a transitional heat transfer block between the four lower
C-shaped heatpipes to a second set of four heatpipes which extend to the heatsink.
This looks like a less than ideal setup, and that transition point adds a point
of potential heat loss. It looks like it was done so the heatpipes could clear
the tallish heatsinks on that side of the motherboard.

When asked about the odd double-decker arrangement of the heatpipes, Peter
Nickol of EPCN explained that it’s actually more efficient than the single CPU
heatblock Streacom offers. The heatblock for the double-decker system uses direct-touch
heatpipes, with the copper pipes making direct contact with the CPU. Streacom’s
single CPU heatblock encases the heatpipes in aluminum; this leads in a small
but measurable decrease in cooling. A single copper heatblock would probably
perform better, but for now EPCN prefers the double-decker heatpipe setup as
it provided better performance.

This is the core of the SPCR certification for a PC. Many tools are used to
analyze the system:

The basic approach is to assess the noise, thermal and power characteristics
at idle, and then at full CPU and GPU loads. The testing is conducted entirely
in the SPCR anechoic chamber. Measurements under load are recorded 10 minutes
after all temperatures stabilize. This can take upwards of an hour in some cases,
which is an artificially long time for either CPU or GPU (never mind both simultaneously)
to be at continuous 100% load; it simply does not happen in actual use with
real applications, even the most demanding 3D games. With the torture test settings,
Prime95 loads up an Intel CPU like no other real application, as does FurMark
with any GPU. When run together, they comprise a far more extreme torture test
than used by 99% of PC system integrators.

All the testing is now done at 30°C room ambient temperature. Electric
space heaters are used to raise the air temperature in the anechoic chamber
to 30°C. The heaters are then turned on/off as necessary to maintain that
room ambient during testing. The hot room pushes the cooling capabilities of
any PC to extremes, especially with the extended time of the artificial maximum
CPU/GPU loads. This was done in response to feedback from users in hot climates
as well as vendors considering participation in the SPCR Silent/Quiet PC Certification
system.

Some other system states were added to the testing:

Noise – With the exception of the DVD drive, no component in the sample
EPCN Streacom FC9 Micro ATX Fanless PC emitted any noise to break above the
10~11 dBA ambient noise floor of the anechoic chamber during the entire testing,
even at the half meter distance specified for "seated user" SPL
per ISO 7779, a computer noise measurement standard. It is an unequivocally
silent machine.

The AC/DC adapter made a low level squealing noise when AC power draw exceeded
55W (ie, during Prime95 and/or Furmark), but this was audible only from a
foot away. It could not be measured at the half-meter ISO 7779 "seated
user" distance. The fact that the adapter will normally be on the floor
behind a desk or cabinet makes its audibility extremely remote even for those
with hyper-sensitive hearing.

The DVD drive made a single soft clicking sound when power to the PC was
engaged. When used to play a DVD movie, it emitted a smooth broadband noise
measuring 17 dBA@1m, or 21 dBA@1/2 meter. The soundtrack of whatever program
is being watched obscures the sound of the DVD drive, even from a meter away,
and especially if the PC is placed under a big screen TV, with the viewers
seated at any normal distance from the screen.

There no reason to believe a Bluray drive offered by EPCN for this system
would differ much in acoustics.

Cooling – In the hot 30°C environment of the test chamber, the
CPU, GPU and motherboard all ran fairly warm compared to a typical fan-cooled
PC. Still, in all the typical real-world applications (DVD play, HDD seek,
1080p playback and video encoding), CPU temperature never exceeded 60°C;
typically it was around 50°C, or just 20°C above ambient. The temperature
of the PCH (Platform Controller Hub or motherboard chip) was consistently
around 60°C, which is a bit high, but again, the high test ambient temperature
has to be taken into account. It was only during the extreme torture test
of Prime95 + Furmark that both CPU and PCH temperatures hit or exceeded 70°C,
which is near the borderline for safe operation. No CPU throttling or any
other system misbehavior was observed during any of these tests.

EPCN’s claim that this PC is safe to operate at up to 30°C ambient is
justified.

Energy Efficiency – The power draw of this system is a modest 30W
at idle. Under 40W for any type of video playback is excellent, as is the
43W seen during video encoding. With power turned off or in sleep mode, the
system drew 2.1W, which is low but not quite the sub-1W level that can be
achieved with the latest generation of CPUs and motherboards. The maximum
draw of 67W after an hour of full CPU/GPU load is excellent.

Performance is not a criteria for SPCR Certification, but for the record,
this PC with its 240 GB Intel 520 SSD boots to the Windows 8 desktop in around
16 seconds, and has a Windows Experience Index of 5.2 (determined by the lowest
sub-score in Graphics). It provides very good performance for all applications;
the only real limitation is in demanding complex 3D gaming.

The EPCN Streacom FC9 Fanless PC easily qualifies for SPCR Silent PC certification.
In normal use, even at extremely high, extended loads, the system remains silent,
with real SPL well under 10 dBA at any distance. It could be regarded as the
first "0 dBA" PC SPCR has certified.